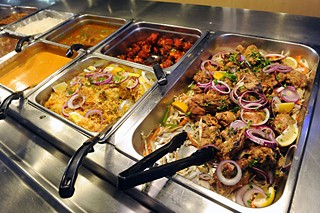 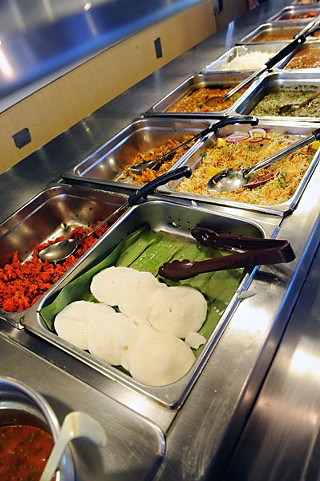 Daawat, which means "feast," has been open a couple of years, replacing what used to be my favorite subcontinental restaurant, Indian Spicy Kitchen. When asked what happened to the previous tenant, my server told me, "the Nepalese food was too spicy for Austin." That's ironic since "spicy" was in the name, so customers should have had a clue what to expect. It had a perfect spice level for me, but they retooled with a different menu, focusing more on the foods of the south, leaving the elevations of Nepal far behind. They kept just enough of the standard Indian dishes on the menu to keep the rookies happy, but down south is where it's at now; think Andhra Pradesh, Tamil Nadu, Mysore-Bangalore, Kerala, Goa, etc. 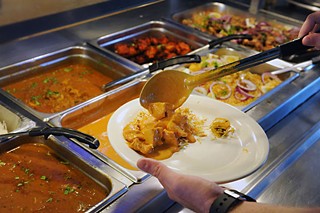 Daawat is located on the southeast corner of Parmer and I-35, due north of the H-E-B gas pumps. Bollywood videos play on multiple flat screens in the comfortable and welcoming space. The buffet runs in front of the kitchen along the west side. We sampled the spread on the first visit, which draws a crowd of programmers from nearby computer firms. In fact, we were the only ones without security badges around our necks. 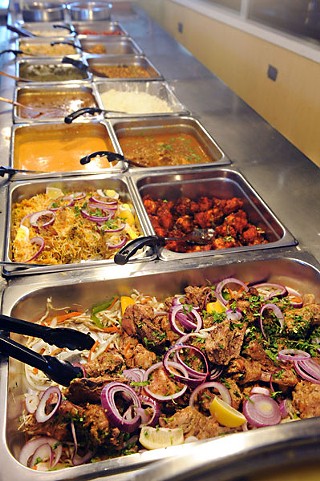 The buffet lineup featured 20 items for $10.99. Favorites included a deeply flavorful, dark and spicy Chettinad-style goat curry; a melt-in-your-mouth Mughlai malai chicken curry with yogurt, cream, and saffron; an Andhra masala-based natu kodi curry with chicken, poppy seeds, and Guntur chile; a "chicken wing masala" coated with red chile paste, curry leaf, and other goodies; and an intriguing warm Keralan banana payasam dessert with milk, cardamom, cashews, and coconut. The buffet stands out because of constant replenishment. Items are brought out in small quantities, so they get refilled frequently and keep fresh. There are also some nonstandard Indian buffet dishes, which is refreshing. Every dish tastes unique, with a nice level of piquancy. Best of all, they bring the blistering hot, bubbly naan straight from the tandoor to your table, instead of leaving it to go stale on the buffet.

On a return visit, I had to try their Chicken 65 ($6.99), a thickly coated boneless Tamil dish with spice paste and gram (chickpea) flour, deep fried, and tossed with chiles and curry leaf. I'm addicted to this appetizer and could eat it by the bucket. The catfish pulusu ($11.99), an Andhra curry gravy on marinated catfish steaks, with pureed caramelized onion, tamarind, turmeric, chile, and curry leaf, was delicious enough to spoon like soup. The Bhagara Baigan ($8.99) was another winner, a Hyderabad/Andhra thick curry of baby eggplant with a spicy peanut-sesame paste. The eggplant tasted great, but the curry, eaten as a dip with the perfect garlic naan, is even better. The Mysore Masala Dosa ($7.99), a delectable South Indian rice crêpe that's golden brown, crisp on the outside and soft-textured on the inside, is filled with potato palya with hot spice powder. It's a vegetarian treat when dipped into the coconut chutney and vegetable sambar. Their naan is first-rate, puffed up on top, lightly charred on the bottom, and loaded with caramelized garlic ($2.49) and caramelized onion ($2.99 for the onion kulcha).

The one dish that didn't knock me out was the chile-garlic hakka noodles ($7.99), but I didn't really expect it to. Tossed with a Sichuan sauce and stir-fried with carrot, cabbage, onion, garlic, and peas, it's really not that bad. But it is there to appease the bland, "I can't eat spicy" fried rice and noodle crowd, and offer amends for the dearly departed Nepalese grub. Bring that super spicy oddball stuff back pronto, I say. It would meld perfectly with the fantastic, spicy, no-compromise southern-style specialties that Daawat is turning out now.