Keith Kreeger's ceramics get up close and personal

At the beginning of Edith Wharton's 1905 novel, The House of Mirth, the tragic heroine Lily Bart grills her soul mate, Lawrence Selden, on the practice of collecting books and Americana. When asked whether he collects the artifacts associated with American history, folklore, and cultural practices, Selden replies, "I'm not really a collector, you see; I simply like to have good editions of the books I am fond of ... Your real collector values a thing for its rarity. I don't suppose the buyers of Americana sit up reading them all night."

Selden pompously articulates the tension between gathering artifacts for use and for status. More than a century later, we still hoard foraged treasures, pawing through antique markets for potential heirlooms. We peruse estate sales, drawn to etched cordial glasses or Fire-King Jadeite dishes like magpies. Some might collect in order to demonstrate their taste or communicate an identification with an aesthetic, but in the end, they are all trophies of consumption once they're put on display.

Keith Kreeger, on the other hand, doesn't want his work placed on a mantle. He wants fresh blooms popped into bud vases, platters passed around tables, forks scraping on plates as laughter and conversation fill space. Kreeger's work, with its stark white simplicity and signature hard, incised lines, is appropriate for both taco Tuesdays at home and a splashy night at Qui. In the process, he's helping to document Austin's current dining culture.

"The irony of what I do now is that I never liked making plates," recalls Kreeger in the showroom of his studio at the Eastside Canopy artists' complex. "I would make serving bowls and all these things around the ritual of dining, but I hated getting dinnerware orders. It wasn't something I enjoyed. Turns out, as an artist, it's a new process and a new way for me to explore my work."

Born and raised in New York, it wasn't until Kreeger was studying for a bachelor's in American studies at Skidmore College that he discovered his knack for clay. Opting to stick around for the summer, he wound up spending entire days in the ceramics studio. He decided to add a ceramics minor to his portfolio, allowing him to work with Toshiko Takaezu, the Japanese artist whose abstract ceramic sculptures contributed to the legitimization of ceramics in fine art. After graduation, Kreeger and his Houston-native wife, Evangelina, relocated to Cape Cod, where they ran a gallery from 1998 until 2009. That's when, as it often does to its native children, Texas beckoned. What he couldn't have known was that this move would be the bellwether of his career.

"We moved to Austin just when the current [restaurant] explosion was starting," says Kreeger. "La Condesa had just opened, Uchiko was about to open, there was this vibrancy of 'new' happening right when we moved here. That inspired my work. I wasn't trying to work with restaurants, I was realizing that restaurant customers were my customers. I realized that everyone who bought my work and served on these pieces understood the concept that it doesn't just matter what you're serving and where you're getting your food from, but what you're serving it on matters too."

It didn't take long for Kreeger's aesthetic to gain traction. When Paul Qui opened his lauded restaurant in 2013, he asked Kreeger to make the dishware, a relationship that remains in place today as the restaurant transitions to a tastings-only menu served on what Kreeger describes as a "deductive bento box." More relationships bloomed from there. Chef Shawn Cirkiel asked Kreeger to make the water pitchers for his recently opened, Southwestern-themed chavez in the Downtown Radisson. 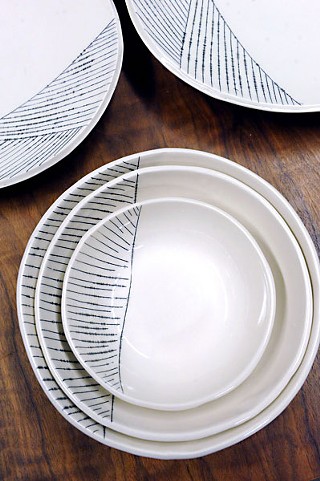 "At chavez, we wanted to be very conscious of a sense of place, and more than anything, to tell a story, so we tried to utilize a lot of materials and textures and artisans to help us tell the story of being a Texas restaurant and what it means to be from Austin," explains Cirkiel. "We very much wanted to have a sense of warmth with the water pitchers and a sense of coming into our environment to share, not just a glass pitcher. What we asked Keith to do was come up with the pitchers based on our colors and shapes and all the different design features that we utilize through the whole space." Instead of nondescript stainless steel or glass pitchers, the chavez dining room is salted with elegant vessels incised with delicate red slashes – an unmistakably Kreeger touch. They help lend the sleek, pecan-walled dining room the feel of visiting the home of a very rich friend.

Just as Kreeger's work lends restaurants a sense of place – look for Kreeger's votives in a regionally identified restaurant with a high-profile fall opening – the sense of place lends itself to his work. "My work definitely got cleaner and more contemporary after moving here," he says. "I think that was responding to being in a city that was growing and had so much cool architecture going up."

Austin's imprint on Kreeger's work and its resultant role in the city's dynamic dining scene will someday tell the story of this moment in our culture. Scholar Marcie Cohen Ferris writes in The 'Stuff' of Southern Food that "the evidence of how and what people ate is an important material expression of ... economic and cultural transformation." One could argue that restaurants' use of Kreeger's distinctive work, which melds traditional methods with contemporary minimalism, marks the moment in which Austin dining arrived in the big leagues.

For Kreeger, though, his success is a reflection of the sharing economy among seemingly disparate groups. "There's a lot of collaboration between groups that you wouldn't expect would talk to each other. Tech talks to photography, art talks to chefs, and so on," he says. "Coming from the Northeast, I wasn't used to that. Everyone has their version of Austin, whether it's old or new or now or whatever, but I feel like people are willing to share and connect and trade favors more than anywhere I've seen before."

The result of all of this collaboration has been success upon success. In addition to his restaurant presence, Kreeger's work has been used in contexts both swanky and quirky, from private dinners during SXSW to backyard tiki parties. Kreeger has recently completed a set of old-fashioned tumblers and shot glasses to give away as part of a Barman's Fund charity event on August 25. Austin filmmaker Rob Thomas even used a few pieces of Kreeger's work in the Veronica Mars movie.

Ultimately, Kreeger is concerned with creating memorable dining experiences through his work. "Dining is community and an experience that you share with others," he says. "I want my work to be used, and the best way to use my work is to put food on it.

"I'm trying to make stuff that matters, that I'm happy with, and has a context. If I can get it in that right context, which for me is dining and the experience of living in community, I'm happy. Whether that context is someone's home where every night a family of five is eating off my wares, that's humbling. If it's a restaurant setting where every night 300 people are going through and using my work, it's incredibly humbling also."

This is not to say that Kreeger's work is not art. Witness the transformation the plates from Qui that were too chipped to keep in the dinner service rotation: Peelander Yellow painted his signature weirdo images on them, and then they were auctioned off as art pieces for charity. Once the plates were too used up to be functional, they shifted to collectible Americana, imbued with commensal experience, documents of a specific cultural moment in a specific place. It's hard to imagine a higher purpose for a humble dish.