Restaurant Review: Behind the Case 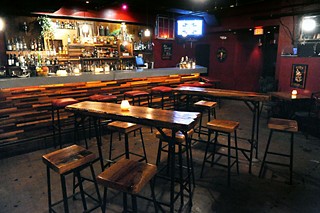 As with many good stories, this one started over a late-night meal. A year before the Firehouse Hostel and Lounge came to be, owner Collin Ballard traveled here from Washington state to scout locations for his dream: a new hostel. Staying in Austin's only hostel at the time, Hostelling International Austin on Lakeshore Boulevard, Ballard struggled to put together an after-dark snack. Manager Mariana Guerrero came to his rescue with a bowl of spaghetti. Warmed by pasta, Ballard shared his vision of opening an Austin hostel. Guerrero told him, "Well, if you ever do, look me up!"

Ballard's plan soon found form in the oldest standing fire station in Austin, Washington Fire Hall No. 1, built in 1885 across from the then under construction Driskill Hotel. Later it became an office building, but it had stood empty for many years when Ballard and partner Kent Roth took over in December of 2011. The first floor was under a separate lease, but adding a bar to the hostel was always part of the future plan.

From there, the business accelerated through a series of happy accidents. The first happened when Ballard and Roth ran an ad looking for a manager. When Guerrero walked in to interview – over a year after that bowl of pasta – bells rang. Ballard remembered her simple care, courtesy, and humor. A trio quickly formed. 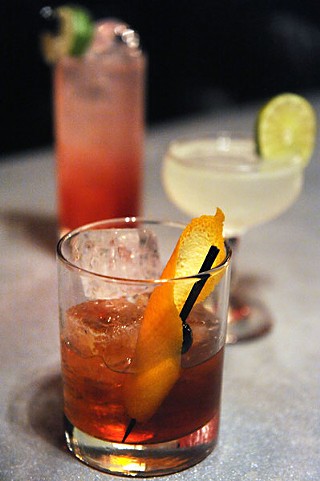 February 2012 brought another surprise. The bar space was offered long before the team had anticipated. Focus quickly shifted from hostel construction to getting the bar ready to bring in cash. In a record build-out, Firehouse Lounge was ready for South by Southwest in March, merely 10 days after the owners received the keys.

The bar has evolved since those crazy two weeks in 2012. The owners have relished the lounge's uniqueness, while standing firmly on three main tenets: atmosphere, cocktails, and location. But their main attraction may be their entrance, a sliding bookcase just inside the hostel lobby.

"People come from all the way around the world and have heard about the bookcase," Guerrero gushes. "And then some locals come into the lobby, can't figure out how to get into the lounge, are too scared to ask, and just leave. It's so funny!"

Like any hotel bar, the lounge has a built-in clientele with 70 beds upstairs filled with international travelers. Still, the bar tosses a far wider net and prides itself on a diverse clientele, low pretension, and hospitality. Intent on staying in step with its core clientele – most of whom are traveling on a shoestring budget – the lounge offers creative drinks for under $11 and small, rustic plates mostly under $10.

"There just can't be disparity between who we want to host upstairs and what we offer down here. It's a fine line," Guerrero says. "We're also, in many ways, the everyman's bar, where people come after work."

But Firehouse Lounge offers anything but everyday drinks. "We like to call it 'craft dive,'" Guerrero says. That can mean something as lovely as a perfect Old Fashioned or vodka gimlet or one of several local beers on tap. The food menu is filled with imported meats, cheese, and sandwiches on Easy Tiger breads. Bowls of smoked almonds keep customers in the seats. And there is always the option to just stay the night, dozing in an unadorned bed upstairs where volunteer firefighters staked claim a century ago.