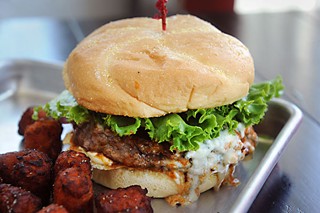 It's usually a fair bet that a restaurant is struggling when they employ some sort of gimmick. On a recent weekend visit to the Silo on Seventh, the gimmick came in the form of a rooftop DJ projecting Nineties music videos on the namesake architecture. The only tenuous link to dining was a song from alt-rockers Cake.

It was a shame, because the deck at Silo doesn't really need bells and whistles. It's neutrally outfitted with picnic tables, comfortable benches, and sleek metal chairs – a splash of color provided by the sky. It's a lovely place to be during dusk, surrounded by the twinkle of string lights. Unfortunately, the musical distraction was sometimes needed. Mostly composed of burgers and bar grub, there is ambition in the flavor profiles. And when they hit their mark, Silo sung. Too often, however, the food and drink lacked voice.

Any good rooftop deck deserves equally compelling cocktails. The cucumber margaritas ($8) were described as "traditional rocks margaritas with Effen cucumber vodka," although we aren't sure which tradition forsakes the earthy kick of tequila. The cucumber came in clearly, a nice astringent touch, but it was lost in what tasted like sweet-and-sour mix. The server advised that the drink was solely comprised of spirit, lime, and simple syrup, but it is difficult to imagine lime juice being so cloying. The Kentucky Mule ($8), however, was sure in its balancing act. Here ginger's snap elevated the honey of bourbon, making us wonder why we wasted so many years on Moscow.

The appetizers were equally uneven. Fried green tomatillos ($5) were served with a verdant jalapeño ranch. Unfortunately, the tempura batter, while delicately puffed on the outside, needed a little more time in the deep-fryer to rid the dish of inside pastiness. The tomatillos themselves were nicely tart but lacked the textural complexity that makes fried green tomatoes a Southern classic. The deep-fried deviled eggs ($6.50) fared better, although again the batter (more tempura) was slightly undercooked. While the eggs were church social regulation, the airy crust gave the density a lift. The accompanying chipotle ranch lent a little smolder. The kitchen's forte was revealed on a second visit. Buffalo wings may have now attained pizza-delivery ubiquity, but they are difficult to get just right. Silo's wings ($8.50) are fried just enough to seal in the juices, sparingly coated in an infumed sauce. The dressing was chockablock with bleu cheese.

The burger menu, mostly named for nearby streets, boasted variety and inventiveness. On paper, the Navasota ($10.95) seemed like a sure bet. The ingredients are an honor roll of Southwestern flavors – grilled avocado and serranos, tomatillo, cilantro, and chipotle adobo, theoretically calmed by mayo and muenster cheese. But on the first visit, the adobo sauce made all the other toppings moot. A lighter touch would have chastened adobo's diva tendencies. That issue was corrected on the second go-round. Moderately used, the sauce blended with the pork patty's succulence. The tomatillo twang alas had its moment.

If the Navasota was a flavor bomb, the San Marcos ($9.95) suffered from the opposite problem. It was a battle to find any flavor in the combo of grilled portobello mushroom and vegan cilantro mayo. The vegan bun, though nicely toasted, did not hold up to the vegetable landslide. And the onion strings offered little textural respite. The Chicon ($11.95) was a must-try for its audacity. Its everything-but-the-kitchen-sink approach includes ground beef, white Cheddar, grilled onion and pineapple, pickled beets, a fried egg, and chili mayo – all Dagwood-piled on a kaiser roll. Surprisingly, it all melded into a cohesive whole. Still, it needed a little oomph, corrected by a light sprinkle of salt. The side of sweet potato tots ($1.95) also brought out the burger's less assertive ingredients.

It's worth noting that Silo's successes all occurred on the second visit. One wonders if the staff is still finding its stride (admittedly tough when the waitstaff has to scurry about multiple levels). Ultimately, DJs aren't needed if Silo keeps their standards in check. To excel in the cluttered Eastside dining scene, the music will need to come out of the kitchen.