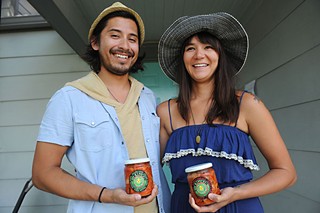 Austin's newest obsession, kimchi, has been generations in the making. "It's time. Austin's ready. Fermentation isn't going away," says Abbi Lunde, co-owner of Oh Kimchi Austin with husband Duane. Judging by their soaring success, we think they are on to something. Kimchi is an edible record of human culture, with highly honored personal flavors. Lunde says it even has the power to save lives.

Kimchi is primarily eaten as a side dish, or banchan, consisting of some form of fermented vegetables. It originated as early as the first century, but took its current form in the 1700s when New World trading opened up spice channels. Korea's national dish is typically made with napa cabbage, fish sauce, and seasonings. The taste is spicy and sour, with a hint of sweetness from the sugar used to feed the probiotics. But tradition aside, kimchi is a rebellious little creature. Its endless quirks and its intense flavor are dependent on the ingredients and, well, its personality.

The intensity can make kimchi a hard sell, but Lunde hopes to change minds. "Duane didn't love the kimchi when we started doing this, but he loved the cucumbers, and then he got addicted to the probiotics," says Lunde. "We're like probiotic drug dealers." She says kimchi boasts four times the amount of probiotics found in Greek yogurt, and Health magazine included it in their top five healthiest foods in the world. Even First Lady Michelle Obama is a fan.

Kimchi is delicious on its own, but it happens to be incredible when paired. The Oh Kimchi website is full of recipes for sandwiches, soups, and pancakes. Abbi also recommends combining kimchi with breakfast tacos or a grilled cheese or quesadilla and using the cucumbers on burgers or pulled pork. The leftover juice can make Bloody Marys or micheladas. Many swear that drinking the juice before bed will help prevent hangovers.

Currently, Lunde's kimchi compound offers a base menu of around five varieties, but they mix it up seasonally. For $10 per jar, the options include traditional (with napa and fish sauce), vegan/paleo (no fish sauce, with bananas replacing the sugar), cucumber, Western cabbage (a great bridge between sauerkraut and kimchi), plus varieties with crunchy daikon, Korean/Alpine turnip, mustard greens, and japchae noodles. They also create a mool kimchi – or water kimchi – with slices of daikon, green onions, napa, and carrots floating in probiotic juice. Lunde says, "The liquid is a kind of cold soup that you can drink. It settles your stomach and your digestion."

The Oh Kimchi menu is based on homestyle, traditional recipes from Abbi's mother, Jenny Long, and namesake matriarch Grandma Oh. Growing up in Louisiana, but spending much time in the countryside outside of Seoul with her family, Abbi learned the tradition from the women. She says the recipes are "really a lost art form ... because it's been passed down from generation to generation and kids nowadays are so Americanized. They're just not really interested in learning to make kimchi anymore." Her mother, in fact, "was very Americanized when she first came here .... After a while she started watching a lot of Korean soap operas again and kind of got reintroduced to her own culture."

After the birth of their daughter, Duane and Abbi's collective lightbulb went off while working at Johnson's Backyard Gar­den. The large bounty of cucumbers being composted last summer inspired the couple to start making batches at home for loved ones. Almost immediately after they began peddling their wares at farmers' markets, they were selling out.

They still source locally and seasonally as often as possible, but in Korea, kimchi is made with what's available. "My family was really poor ... so they would forage for a lot of vegetables, and they just kind of made it work with whatever was available. My mom eats a lot of weeds. She goes out on walks and will find things ... start harvesting them, and take them home to transplant them in her garden. She's started this whole collection of Korean weeds."

That adaptability is part of the charm. "For Koreans, kimchi is a signature on a paper ... or like a business card. You could have 10 different people with the exact same ingredients and the exact same measurements, but just the way they mix it, and their own personality going into the kimchi, flavors it," says Lunde. Even a slight variation (ripeness of vegetable, different source of fish sauce, etc.) changes the batch, so adhering to a strict recipe is impossible. "All of our batches are made by hand, and there's no recipe for it. I just taste every batch, and when it tastes right, it goes out," says Lunde. "My mom told me [that it's] because everybody carries bacteria and enzymes on the skin. So when you put your hands into the kimchi, it flavors the kimchi with you."

It's been hard work bringing a cultural phenomenon to Austin, but Oh Kimchi's whirlwind is only beginning. Oh Kimchi's territory has recently expanded to include San Antonio, Waco, and Dallas. In mid-July, Oh Kimchi partnered with Crazy Korean Shopping to make the jars available for shipping nationwide. They just signed on with the local Whole Foods branches, and will go regional – almost 40 stores – by the end of the year. As if that wasn't enough, they're also crunching numbers to bring kimchi to schools, writing a cookbook, and planning a grab-and-go restaurant – with Long at the kitchen's helm. Referencing a favorite book, The Alchem­ist, Duane says, "We believe in manifesting our own destiny ... and here we are less than a year later."

As for that life-saving story? "When [my mom] was a kid," says Lunde, "there were nine brothers and sisters, and they lived in an old house. In Korea they would heat the floor with pipes and a coal furnace. They got carbon monoxide poisoning in the middle of the night, in winter, and all the kids were unconscious. My grandma figures out what's going on and she drags all the kids out into the snow, digs up this pot of mool kimchi from underground, and starts ladling them the broth. All of them come back to life because of the enzymes and probiotics in it. ... We wouldn't be here if it weren't for kimchi."

Food-o-File
Not business as usual