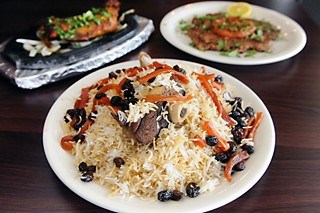 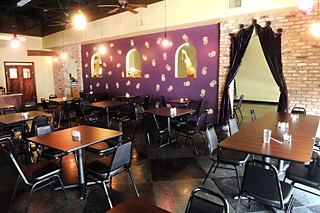 Perched on the western edge of a strip center at the northwest corner of Howard Lane and I-35 in North Austin is Chapli Kababs n Curries. It's the same strip center that is home to Captain TJ's Seafood and Ka-Prow Thai & Sushi. The location seats about 90 or so in the dining room and there is a large party room off to the right. The night before our last Chapli visit, they had hosted a party for 100 folks. The dining room is comfortable and the eye is drawn to the brightly decorated wall separating the rooms. 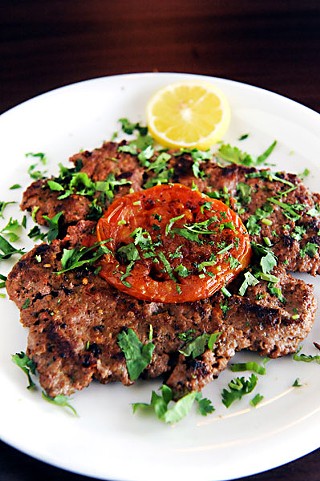 Owners Sy Waheed and Shazad Bashar have put together a menu that is not huge, with about 35 food items listed, mostly from Pakistan and Afghanistan, and everything we have tried has been excellent. A lot of times with Indian or Pakistani restaurants, there will be a similarity of flavors with each dish, regardless of what you ordered; I can't compare the trend to local Afghan restaurants, because this is Austin's first (to my knowledge, anyway). Similarity of flavor is definitely not the case here; the Afghan chef must be using a separate masala for each dish, and the extra effort definitely comes through in the flavors. Each dish is unique. The flavors are big, not subtle, while the taste is layered and complex, with just the right hint of piquant spice lingering at the end. The food is intriguing and delicious; whoever is in the kitchen has a very deft hand with the nuances of spice. 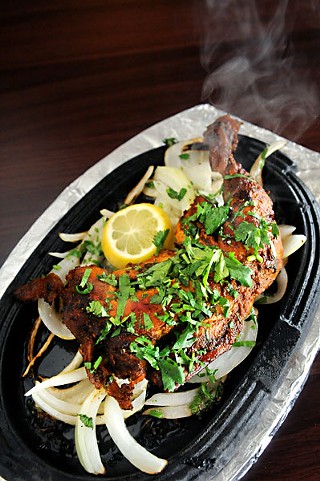 At just $3.99, the Naan Roll here is the best lunch deal in town. A perfectly cooked naan is filled with vibrantly flavored chicken cubes and dressed with a garlicky yogurt dressing. It's filling and satisfying. Their Veggie Samosa ($3.99) features a pair of golden-brown, flaky, fried pyramids filled with the standard potato and pea, but what's not standard is how much flavor they can get from such bland ingredients. We tried the Chicken Tikka Leg ($5.99 for two leg quarters). Normally I never, ever order chicken at a Subcontinent restaurant, because I know it is going to be cooked to death and dry. These leg quarters were indeed a little overcooked, but I've never had any tikka where the marinade penetrated so deeply, bathing the meat in intense favor. I could eat several orders of these legs.

We got the Chapli Kabab ($8.99 à la carte, $10.99 as a platter with rice pulao, salad, and grilled tomato), and loved it. It comes not as ground lamb flattened on a sword-like skewer, but as an 8-inch wide patty of highly seasoned ground lamb. The meat is moist and succulent, with no gaminess at all. The mix is loaded with an appetizing blend of herbs and spices. It matches perfectly with their fantastic garlic naan ($1.99), which is lightly charred on the bottom from the tandoor and bubbly, fluffy, and loaded with garlic on the top. We had heard the breads here were really good, and that rumor is confirmed. We also had the Borani Banjan ($6.99), an Afghan eggplant dish loaded with meltingly tender eggplant, onion, and peppers in a tomato-and-turmeric sauce; it is complemented by a fine mint yogurt sauce on top.

The Borani paired nicely with the Kabuli Pulao ($11.99), a huge, beautiful mound of savory basmati rice garnished with thin carrot julienne and plump raisins, with an unctuous lamb shank of fall-off-the-bone tender meat perched in the center. I have no idea how involved the process is to transform the rice into long, separate, noodle-like threads, but it is definitely an art. Some of the rice had been flavored with the broth from the braised lamb, while the remainder was well-spiced. The combined effect was an artfully appealing mélange. After Pars Deli, this has to be the best lamb shank in town (and Pars has a knockout shank!). We also had the Lamb Kabab ($8.99 à la carte; only because they were out of the goat curry – the party guests the night before ate up all the goat). Usually with a lamb kebab you get little gristly, fatty cubes. At Chapli Kabab, the cubes were plump and all-meat, well-marinated, and tasty as hell, especially when dunked in the raita on the side.

The service at Chapli is helpful and friendly, the portions are large, the ingredients halal, and the prices very reasonable for the quality and amount of food served. This is one of those new spots that I hope folks find out about quickly, because adventurous Austin diners deserve to be exposed to the wonderful Afghan food, and the owners deserve a successful restaurant. I know that I'll be going back; there is definitely some goat in my future, and I'm convinced these guys will do it right.