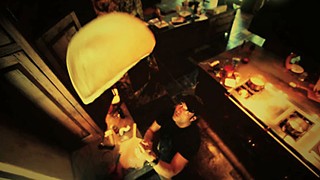 Director Robert Rodriguez's bid to purchase the Jovita's restaurant property (1619 S. First) may still come to fruition. "Having a restaurant has been one of my dreams for a long time, and I've been looking for a property where I could do a restaurant with Rene Ortiz and make the most of his great talent. I've spent a lot of time in that building over the years when my sister, Patricia Vonne, used to play there, so I'm familiar with it and I love the old Austin feel it has. We'll see what happens; obviously the circumstances complicate things, but if it's meant to be, it'll happen. Hopefully, the attorneys will get it solved and we can revitalize another great Austin location," Rodriguez told me. Rodriguez also shared a little bit about his plans for entertaining President Barack Obama at his home (the event was set to take place yesterday after press deadline). Serious pizzamaker Rodriguez said he planned to serve hand-tossed, Neapolitan-style pizzas from his wood-fired oven on servers embossed with the presidential seal, while Ortiz was to prepare specially created El Presidente tacos.

This has already been a big week for barbecue news with more to come. Over the holiday weekend, the owner of La Barbecue tweeted that they'll be moving soon. With their current Waller and East Sixth location involved in yet another estate battle, GoodLife Food Park (900 E. Cesar Chavez) owner Garry Wise offered them a prime spot in his new park with greater visibility and room for another pit to increase their capacity. According to an email from La Barbecue owner LeAnn Mueller, the new pit will be in the works soon and she, general manager Ali Clem, and pit boss John Lewis plan to move on August 1... After a two-week working hiatus in which he enclosed the smokers and increased the kitchen space by 1,000 square feet, Aaron Franklin reopened Franklin Barbecue July 8, to the great relief of smoked-meat addicts all over town. Look for Austin Chronicle contributing writer Mick Vann's conversation with Franklin about the renovations, plus some photos at austinchronicle.com/daily/food... Texas Monthly offshoot TMBBQ and Shiner Beers host the second annual Texas Barbecue Week July 13-19 where participating restaurants around the state will offer a designated Texas barbecue plate with the proceeds benefiting Foodways Texas. Last year, they raised more than $10,000 for the cultural nonprofit that does such an excellent job of preserving and promoting Texas culinary traditions. For a list of participating restaurants and their special plates, go to www.tmbbq.com.

The building at 2406 Manor Rd. is nearing completion, and the first two tenants are eager to have their eateries up and running. Jesse Griffiths and his Dai Due team worked their last weekend at stalls in area farmers' markets in anticipation of the opening of Dai Due Butcher Shop & Supper Club. Meanwhile Sugar Mama's East owner Olivia O'Neal has shared a sneak peak at her opening menu, and boy, are we all in for a treat when she's set up in this hood!... During the entire month of July, all Austin Kerbey Lane Cafe locations will be accepting donations of two canned goods for the Capital Area Food Bank in exchange for $1 off any entrée ordered, with a maximum 10 cans/$5 available. Cash donations accepted, too.