Downtown's Garage Is a Hidden Gem 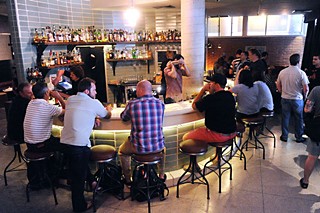 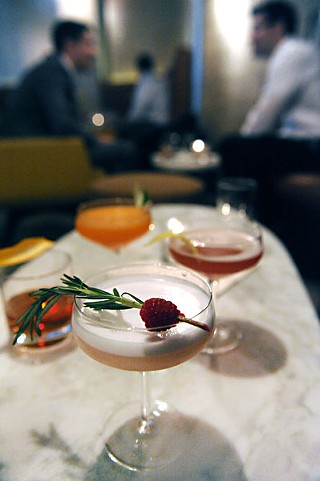 There's something about drinking in a truly tucked-away bar, happily shielded from gawking passersby and clearly knowing more about what's cool than your average Joe. Austin has its fair share of hidden bars, but Garage, a newcomer on the craft cocktail scene, certainly had this Downtown veteran circling the block. Built into the parking garage of the American National Bank building at the corner of Sixth and Colorado, Garage is a challenge to locate. However, the trio of owners brought in some big names to realize the potential they knew the location offered.

Carved into an old, cavernlike valet ticketing office, the space is dark with high ceilings, clean metal lines, and charming historical touches. East Side Show Room's Mickie Spencer did the impressive metal work, and local artist Evan Voyles designed the simple, sharp neon. Records spin as ice smacks against silver shakers. There is a constant low buzz inside. Walking up from a parking spot below or even in from the street level, the exterior leading to the door is so rough that the first steps inside are breathtaking by contrast. Such is the trick here: hidden treasures. Look for the legendary Bob Bullock's signature in the concrete flooring. 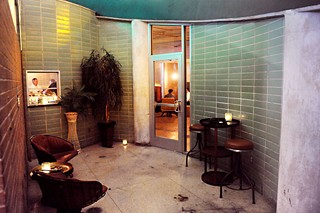 Garage's head barman, Chauncy James, came to the project following time at East Side Show Room, Volstead, and Arro, and created the circular 15-seat bar with efficiency in mind.

"I got to do the entire bar design," says James. "Everybody wants to turn their bar into a craft cocktail bar, and I don't think they have any idea of what it takes to set that up. It all really has to be at arm's length." A peek past artful swinging doors and behind the bar illustrates how James considered two tenets most important: volume and craft. Three stations were constructed like three complete bars – each able to function nearly independently, each with its own POS, well bottles, mixers, and so forth. Less crossover movement and fewer steps means more drinks can be made on any given night.

"I don't care how good your cocktail tastes," says James, "if I waited 15 minutes for it, I hate you." We laugh, but we all know what he means. There is fun and creativity, and then there is getting a drink in your hand. "Everybody feels that way, and I think especially in Austin, we've picked up on that sentiment and we want to get you that drink as fast as possible," he says.

And Garage does get busy, despite its clandestine locale. Tameca Jones plays weekly, bringing in a crowd looking for live music, and an upcoming food menu promises to round out the experience. In keeping with the not-too-overt theme, the drink list is broken down into categories of Custom, Vintage, and Refurbished. James' favorite creation on this list might be the Queen Anne's Lace, a daring mash-up of French G'Vine Floraison gin, sarsaparilla bitters, and unsuspected partners of carrot, maple, lime, and peach. It was smooth and delicious as layers of flavors kept revealing themselves. The Japanese Cowboy includes a 2-ounce pour of Yamazaki whisky, which is not found behind many bars in town. Everything from the elegant wine glasses to the impressive vinyl collection has been equally well thought out.

Co-owner Bron Hager is more than proud of the accomplishment. "We're open! I can't believe it," he beams. He sees a bright future for Garage, following what was an admittedly quiet February opening. But with its secretive locale and mellow, classy vibe, quiet might just be what it's got going for it. 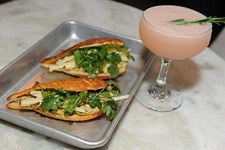