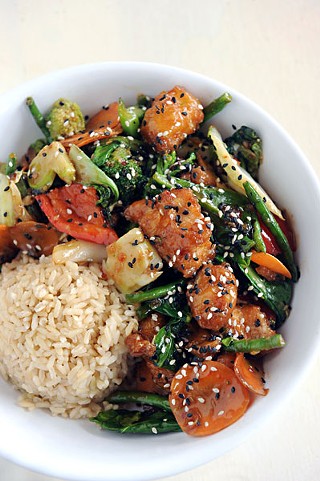 When Americans travel to China, they are often surprised to find that what we know as Chinese food in the United States is quite different from what the Chinese people actually eat. Chinese immigrants to America from the 1850s on have had to adapt their cuisine to the locally available ingredients, substituting carrots for Daikon radish, European broccoli for Chinese broccoli, and bulb onions for scallions, among other changes. Over time, many Chinese dishes were made sweeter, crispier, and blander to appeal to the American palate. 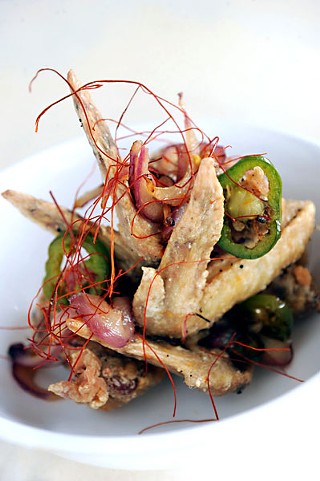 A-OK Chinese, opened on South Lamar by chef John Bullington and Jerry Reid, sets out to celebrate the hybrid nature of American Chinese cuisine, and even glory a bit in its midcentury campiness. The restaurant itself is spic-and-span, with a black, white, and red color scheme that cleverly harmonizes with the nostalgic pagoda-embossed paper cartons. Conceived as largely a takeout joint, the space is streamlined to that purpose, with a small dining area on the north side of the room. An enormous photograph of President Nixon sharing a Chinese banquet with Mao Tse-Tung adorns the south wall, striking the perfect note: ironic, historic, and iconic.

The concept of A-OK is to fully embrace American Chinese cuisine, while improving upon the status quo by making it from high-quality ingredients, locally sourced when possible. In Austin, this modus operandi of making a typically inexpensive, ethnic cuisine out of stellar ingredients and serving it in fancier digs at significantly higher prices has proven to be hugely popular with the public. It is as close to a formula for certain success in this town as you can get. A-OK Chinese should have a line out the door, especially as there isn't much competition in the area. 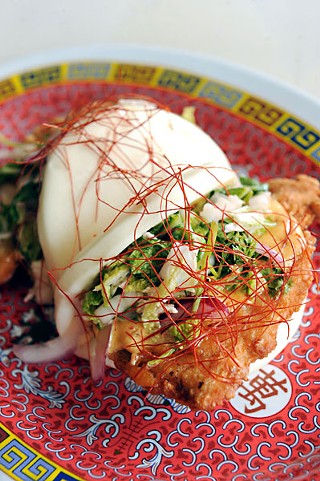 But they don't have a line out the door, and unfortunately, there is good reason: The food is deeply disappointing. Though the ingredients are clearly excellent, the execution is just poor enough that none of the things A-OK does right can quite make up for it. Certainly, some dishes are better than others; but even the more successful dishes taste like clumsy approximations of the real thing, rather than improvements to the standard versions.

The fried egg rolls ($6) are large and flabby, with a thick, chewy casing that manages to be oily on the outside while remaining semiglutinous within. The cabbage and mushroom filling smells sulfurous, and tastes musty. Though accompanied by two dipping sauces, a plum mustard and a hoisin, neither sauce is delicious enough to overcome the essential unpleasantness of the rolls. The wonton soup ($6) is unusual, as it is made with a very dark, strongly flavored mushroom broth, rather than the light chicken broth typically used. The wontons are handmade; unfortunately, their filling is hard and rubbery, with no discernible flavor. Though A-OK's wonton soup has its fans, I am not one of them. 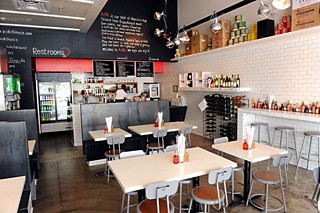 The Kung Pao chicken ($11) bore so little resemblance to any version of this dish I have ever tasted that I would never have known what it was supposed to be, had there not been a few telltale peanuts in its watery sauce. The salt-and-pepper shrimp ($11) and the honey-sesame chicken ($11) were the best of all the dishes I tried, but the highest praise I can give them is of the faint variety: They were reasonably tasty and inoffensive. All three of the above dishes are made with the daily stir-fry vegetables, a mixture of red bell pepper, bok choy, carrots, onions, and green beans, chopped into large, coarse pieces. By using the same medley of vegetables in most of the entrées, the various dishes lose much of their individuality, while gaining the unwanted aura of an institutional cafeteria. The white rice that accompanied the takeout meals I ordered was overcooked, and fused into a solid, insipid rectangle.

I was excited when A-OK opened, and I really wanted to like it. I went back at all times of day. I ate in. I ordered takeout. I took friends, and I ate there alone. I gave the place every chance, and then some. I didn't just hit it on a bad day.

The staff at A-OK is excellent: friendly and knowledgeable, cheerful and obliging. The wine and beer selections are thoughtful and appropriate; the iced green jasmine tea is superlative. The green tea soft-serve ice cream, their only dessert, is delightful. But unless they can get a handle on making Chinese takeout that lives up to, and even exceeds, expectations, it is unlikely that anyone will be willing to pay a premium for it.