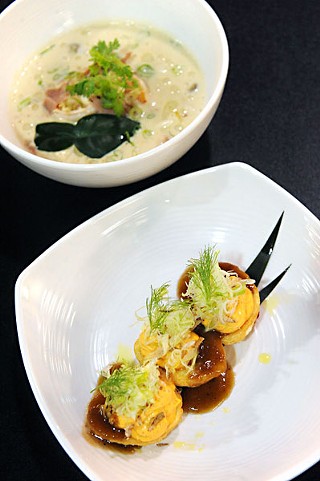 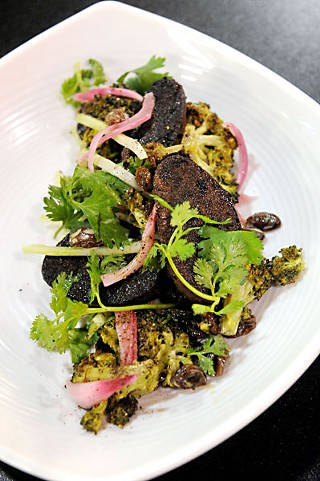 Kin & Comfort is tucked so tidily away in a nondescript shopping center in north Austin that you wouldn't know it was there unless you knew it was there. But perhaps a quiet opening in an off-the-radar location is just what Ek Timrerk needed after the drama of the abrupt shuttering of Spin Modern Thai last summer, followed by the protracted run-up to the highly anticipated February reopening of his sister's beloved restaurant, Titaya's.

Open since mid-April in the space formerly occupied by 123 Noodles in the Hana World Market food court, Timrerk's newest enterprise, along with kitchen partner Bonnie Wright (most recently of East Side King), features mashups of Southern comfort food and classic Thai dishes. Within this context, son-in-law eggs, a popular Thai street food consisting of deep-fried boiled eggs seasoned with tamarind, are transformed into church picnic-worthy deviled eggs topped with wisps of fennel ($3 for 3). Cabbage is elevated from run-of-the-mill coleslaw to a heaping tangle of coconut-dressed crucifers, the raw crunch of the cabbage punctuated by an oily umami pop from fried brussels sprouts and earthy cubes of chilled steamed beets ($5).

Among the entrée offerings, Low Country shrimp and grits salted with Virginia country ham swim in a broth of tom kha soup ($9). Meanwhile, the panang mac and cheese ($8) is not so much fusion as it is putting one dish on top of the other. The beef curry marries interestingly with the white-cheddar shells, although it's perhaps a bit too heavy for consumption during bathing suit season. You might notice a reference to East Side King with the catfish fries ($8), which is deeply reminiscent of that joint's chicken karaage, only lighter and more refreshing. There is ginger ice cream for dessert, but you can't go wrong with the team's interpretation of chess pie, which gets a twist with an infusion of sweet Thai tea and is topped with an herby, nutty pandan whipped cream ($4).

You'd think that with dishes this innovative – seriously, who else is fusing Southern comfort with Southeast Asian cooking here in Austin? – at such a reasonable price point, people would be flocking to Kin & Comfort the same way they do to other culinary upstarts like Uchi and Odd Duck. And yet, during a lazy weekend lunch, only a few diners explored Timrerk's mâe-meets-Mamaw menu, while the adjacent Yoree Korean Cuisine had more patrons than the harried cashier and kitchen staff could handle. Perhaps it's fear of the unknown, perhaps the location is the wrong choice for the menu's intended audience, or maybe there's just not enough word of mouth driving people to the large Asian grocery on Parmer Lane.

Whatever the reasons are for the current lack of long lines at Kin & Comfort, there are many reasons why a semi-secret location is the perfect spot from which to launch a new concept, namely, that Timrerk and Wright have lots of wiggle room to test-drive menu items and edit accordingly. For example, a curried collard greens dish that appeared on the opening menu has since been struck from the roster. Meanwhile, the lack of ambience in the poorly lit space and cash-only transactions help to keep overhead costs low while the restaurant inevitably gains traction. If I were a betting woman, I'd put money on Kin & Comfort being at the forefront of Austin's next generation of "It" restaurants while troubling what we mean when we say, "destination dining."