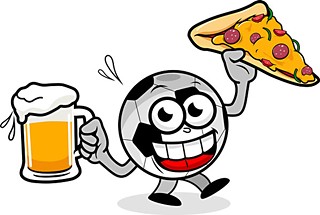 The most wonderful time of the every-four-years is here! The FIFA World Cup will be played in Brazil starting today, June 12, and will finish on July 13. Despite my sympathies with the ongoing protests in the host country, I am a fútbol fan at heart and will be watching religiously. With the sport gaining more popularity in the U.S., everyone wants a share of the viewing action these days. Instead of the obvious sports bars, I've scouted a few out-of-the-box places where I plan to watch in more international settings.


This will be Justine's second time as an excellent World Cup watching venue. Manager and rabid fútbol fan Olivier Calmant and owner Pierre Pelegrin will get things started for the 11am games with Bloody Marys, mimosas, and croissants in the bar and dining room, where they usually set up the big-screen TV. Smaller TVs will be set outside for smokers. Regrettably, they will not show 5pm and 8pm games, since by that time Justine's dinner service will be in full swing. I'll certainly be there on Friday, June 20 to watch France play Switzerland in Salvador, Bahia, a place near and dear to my heart.


Russian House will be showing the games live at the bar, featuring drink and food specials, and a half-time happy hour. You can bet that chef Vladimir Gribkov will pull out all stops in the kitchen, and the vodka will flow freely during Mother Russia's matches. Their regular happy hour 4:30-7pm will be in full swing, with specials on cocktails and their famous infused vodkas. Wild horses will not keep me away from this place when Russia plays South Korea on Tuesday, June 17. Payékhalee!


Both of Licha's owners are die-hard fútbol fans – one from Mexico, the other from France – so you know there will be a loud, passionate atmosphere there. A large screen will be installed on the back patio, as well as smaller TVs inside for those craving air conditioning. Doors will open at 1pm with games shown live, starting with the 2pm games, except on Sundays and Mondays when they are closed. Look for food and drink specials including a total of six house cocktails and smaller portions of their sharable botanas, all for $5. It's likely that fine mezcal will be involved for those of that persuasion. This is where I'll be to watch Mexico take on host nation Brazil. ¡Sí se puede!


This awesome new campus-area pub will be part of the festivities, since chef/owner Mark Schmidt has both German and English roots and is an avid fan. He has set up a large screen in the back dining room (the one with all the photos of dogs) so fans can be comfortable but not on top of non-fútbol fan customers. For tonight's opening game they will feature caipirinha drink specials in honor of Brazil. Schmidt will also be playing with his menu throughout the monthlong tournament to incorporate culinary influences from the various participating countries. I will sure be there when England takes on Uruguay on June 19.


You can't ignore the granddaddy of Austin fútbol bars. As usual, this will be a rowdy spot – chosen as one of the top "Official U.S. Soccer Bars." For the opening game, they will offer food and drink specials, with Brazilian dancers and live music after the game.


This World Cup newcomer is going to be open for day and evening matches, which will be projected on the 25-foot screen in the main room as well as in the lounge. They are promising drink specials and house-made pizzas.