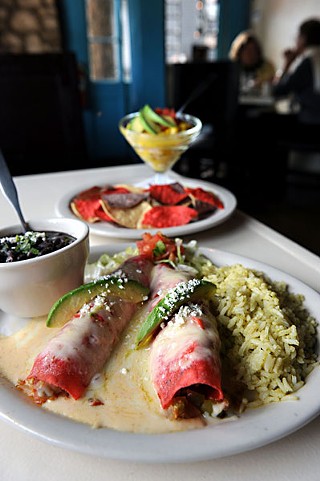 Pelóns is the restaurant that inhabits the old Jaime's Spanish Village building at the corner of Red River and Eighth. Right in the heart of Downtown, it is a miracle that the historic buildings haven't been torn down to make way for a high-rise; instead, restaurateur Doug Guller spent nearly $2 million refurbishing the site. Jaime's was open from 1931 to 2010, and the old building needed a lot of work to come up to code, not to mention a facelift to entice new patrons. What impresses me the most about the remodel is that the massive live oak tree that stands next to the restaurant was preserved. It is a stupendous tree, estimated to be 500 years old, and its spreading limbs shade Pelóns' extremely pleasant patio, as well as the restaurant itself and the neighboring 508 Tequila Bar. 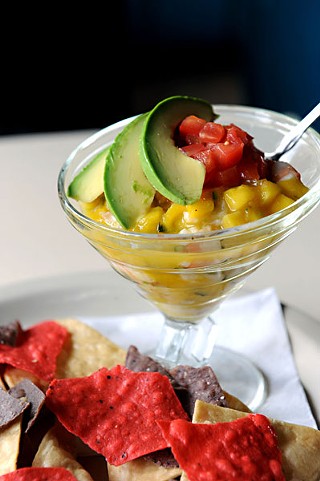 The actual building is less pleasant than its patio, with a low ceiling and a dark, basementlike feel. Still, it has an interesting, Old Mexico-type ambience. Or rather, it would, if the place didn't proclaim itself to be a bar quite so emphatically. To make a fine distinction, Pelóns is a bar that serves food, not a restaurant that happens to have a bar. Loud, mediocre music is pumped everywhere (mostly modern country and rock) creating a frenetic mood, and female servers wear identical, Hooters-like uniforms. (The one male server I encountered was dressed as though he was simultaneously working in the kitchen, which he possibly was.) The staff seemed surprised to have customers during the dinner hour. The vast majority of their business apparently occurs on weekend nights, when there are big shows at neighboring clubs.

In spite of the fact that the place was nearly deserted every time I went, the service was hurried and inattentive. Usually the server was the only human being I saw in the place, leading me to surmise that they run on a skeleton crew during non-peak business hours. If the one server on duty was responsible for the whole place, it is understandable why drinks went dry and chips weren't replenished. We experienced one server who was really hustling, and one who seemed that she couldn't be bothered. For all that, the Tex-Mex that Pelóns serves has some good points. 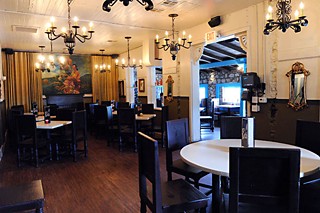 The tortilla chips are of a very fine quality, and never once were they anything but perfectly fresh and lightly warmed. Many highly regarded Mexican eateries in this town could take a page from Pelóns' book on this issue. The salsas, a red and a green, are piquant and delicious. Though neither is fiery hot, they have plenty of fresh and interesting flavor. Ditto for the chile con queso: Though it is of the classic "American cheese" variety, it is tasty and satisfying, especially with the superior grade of chips.

The queso reflects the rest of the menu, which is old-school Tex-Mex, served in a style that will remind you of that ZZ Top Tres Hombres album cover – messy, shiny with grease, highly caloric, and a bit dated. The one standout of the dishes I sampled were the shrimp and lobster enchiladas ($15.99), which were stuffed with Monterey Jack cheese, lobster, and shrimp, topped with a seafood cream sauce and pico de gallo. These were good, especially when enjoyed on the shady patio, under the branches of that magnificent oak. Other dishes were less impressive; the steak fajitas ($18.99) were flabby and flavorless, served on a bed of oily onions and peppers; the nachos ($7.49) were tolerable, but tasted of scorched beans; the fajita chicken quesadilla ($10.99) was lumpen and off-putting.

Pelóns is not now, and is unlikely to become, a destination restaurant. It is a bar that serves food, some of which is good, and most of which is merely average. I have no doubt that it is, however, an excellent place to enjoy margaritas on the patio, before or after a rousing show at Mohawk or Stubb's.