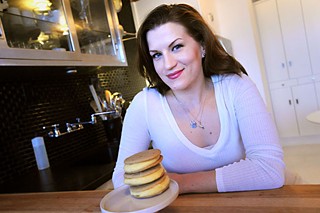 This week's news breaks down to items about baked goods, beer, and brunch. As a serious fan of musician Joe Humel's bagels, I was delighted to learn he had made the move to a brick-and-mortar spot this spring. Now that I've sampled the expanded fare from the walk-up window at Rockstar Bagels (1900 Rosewood), I can report Austin's best bagel-maker is in fine form, turning out several flavors of great bagels, a few delicious bagel sandwiches (bacon, egg, and cheese; BLT; lox and the works; bagel dogs), and containers of spreads. Click the retail tab on his website (www.rockstarbagels.com) for pre-ordering instructions and pick up the fresh, hot bounty 7am-1pm daily... Gluten-free maven and cookbook author Karen Morgan has come out with a line of six gluten-free baking blends designed to work with specific baked goods. Look for the blends online at www.blackbird-bakery.com... The baked crispbreads from Austin-based snack-food company Primizie are a satisfying treat on the market from former caterers and restaurateurs Mark and Lisa Spedale. I had been curious about what happened to the couple after they closed their restaurant on East 11th, and now I know – they've been producing a line of thick-cut crispbreads in several different flavors that have a great crunch and are an interesting partner for dips.

In beer news, Jeff Young (brewer) and Suzy Shaffer (business) from Black Star Co-op have joined forces with a "handful of beer-loving backers" to create Blue Owl Brewery on Austin's Eastside, where they will brew all sour-mashed beers, and have a canning operation and a tasting room. In a recent email, Shaffer said they aren't disclosing the address because construction has yet to begin, but they are hoping for a late fall opening. They'll provide details via social media as an actual debut date approaches... Speaking of Black Star Co-op, they are rolling out two of their beers for sale at outlets around town. Look for their Vulcan and High Esteem to show up at events this weekend... Longtime road musician and trained barista Jack Wilson tells us that not only will his upcoming Radio Coffee & Beer (4204 Manchaca) have Stumptown coffee, 24 beer taps plus kombucha and iced coffee on tap, but he'll also be serving up the occasional musical showcase sometime after his opening in June, including Flipnotic's former bluegrass residency.

On the brunch front, Murph Wilcott advises us Texas French Bread is now offering weekend brunch with full table service from 8am until 3pm. All the longstanding breakfast favorites will be available as soon as the bakery opens. From 10am on, Murph says they'll add mimosas and some of the new brunch menu items that are more in keeping with the fare served in the bistro at night. Should be interesting to see how the bakery's established clientele reacts to the new service model. I'm looking forward to trying it out... Odd Duck (1201 S. Lamar) has begun brunch service 10:30am-2:30pm on Sundays... Ray Benson's Rattle Inn (610 Nueces) is home to a new Sunday Funday brunch with specials on Bloody Marys and mimosas, as well as a $15 brunch buffet from chef Levi Lambert's FoodaPalooza food truck (no relation to the local Lamberts Barbecue). They anticipate the addition of live music soon, which will make it the only live music brunch in their West Sixth neighborhood.