Ruth Reichl is one of the most successful food writers of her generation, with a résumé that includes positions as both restaurant critic and food editor of the Los Angeles Times, restaurant critic of The New York Times, and editor-in-chief of Gourmet magazine. During this time, she also managed to put out three very successful memoirs, Tender at the Bone, Garlic and Sapphires, and Comfort Me With Apples. When Condé Nast closed the venerable 68-year-old Gourmet in 2009 due to declining ad sales, Reichl finally turned her hand to writing fiction. Delicious! is her first novel.

I've always been a fan of Reichl's, keeping an eye on her food section and her reviewing style when possible, and I was impressed with the list of writers she attracted to Gourmet in her tenure there. I found her memoirs to be luxurious indulgences, and came away from Garlic and Sapphires realizing that absent disguises, I just wasn't working hard enough at my job as a restaurant critic. That book read like fiction, and I'm not at all surprised there's talk of turning it into a movie. So, I was already primed to appreciate Reichl's fiction, and she didn't disappoint.

Reichl's heroine is California girl Billie Breslin, who leaves Santa Barbara for New York and snags a plum job as executive assistant to Jake Newberry, editor of the country's oldest food magazine, Delicious! Billie's new world comes complete with mysteries (what happened to her beloved sister, why a woman with her discerning palate won't cook, why the James Beard letters were hidden in the Delicious! library) and fascinating characters (the quirky staff at Delicious!, the family and customers at Fontanari's Italian food shop where she picks up weekend shifts, the elusive Lulu Swan). Through Billie, we get a mouthwatering discovery of New York's culinary scene, as well as insight into the inner workings of a major food publication. There's romance, intrigue, food history, and the fictional appearance of a very real American culinary icon, James Beard. Take Ruth and Billie along on vacation this summer. They are worthwhile companions. 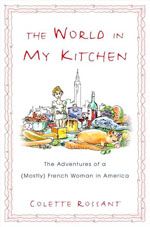