Local gelato maker heads to the finals, delicious tacos at Pachanga, and to-go orders at Sway

There's just no such thing as a slow culinary weekend in this town anymore, that's for sure. Very Important Tacos at Pachanga Fest, three days of gelato in Republic Square Park, an Alamo Drafthouse Rolling Roadshow feast in the Leagues' front yard, not to mention the kick-off to American Craft Beer Week, and the first of two weekends of Austin Restaurant Week. Whew! Be sure to congratulate Matt Lee of Tèo Espresso, Gelato & Bella Vita (1206 W. 38th) for his third-place finish in the North American bracket of the Gelato World Tour. Lee will now be one of three gelatiere to represent North America in the finals in Italy this fall. His flavor, called Nuts, is an all-American peanut-butter base with a swirl of an Italian favorite, Nutella. Chocolatier and former Austinite Katherine Clapner was also judging, and she reports there are now three Dude, Sweet Chocolate stores – two in Dallas and one in Ft. Worth – and she's scouting for a small storefront in Austin.

My favorite aspect of Pachanga Fest this year was the family atmosphere – during the set by DMK, I observed families watching a family making music. It was delightful and reminded me of hippies of my generation dancing with their toddlers in front of the stage at the Armadillo World HQ. The refreshment spread in the VIP lounge was also a winner. We only managed to make it through the first round of excellent tacos complemented by a salsa and queso bar from El Taquito and Casa Chapala, aguas frescas, and some refreshing Mom & Pops paletas. The people's choice taco winner was El Primo (2101 S. First) for their signature al pastor taco. For more about those events, go to austinchronicle.com/daily/food.

For a lightning round of local restaurant news: Sway (1417 S. First) is now taking to-go orders online, exclusively through their website... June Rodil has left Qui to become the beverage director at McGuire/Moorman Hospitality, where her new position is still being developed. She says she expects it to include a mixture of buying, administrative duties, mentoring sommeliers and wine buyers in the company, as well as some customer interaction at Jeffrey's, where she'll be based... Longtime Austin restaurateur Ronald Cheng experiences a homecoming this Sunday with the reopening of his original Chinatown (2712 Bee Caves Rd.) in Rollingwood. Look for more about the updated decor and menu online. Pastry chef Bill Corbett of the award-winning Absinthe Group of San Francisco is the next guest up for Indie Chefs Table at Foreign & Domestic (306 E. 53rd). He'll be there on Monday, June 16, and tickets are available now... Noble Sandwich Co. co-owner John Bates is looking for shelf-stable, local, artisan food items (think jams, pickles, sauces, salsas, chocolates) as well as local kitchen-related utensils, gadgets, soft goods, and books to stock the deli/retail areas in his stores. 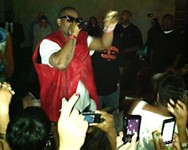