Vilma Mazaite stands before a sea of onlookers, preparing her exegesis on wines by female winemakers in a seminar called Tour de Femme. "I don't want to start a feminist debate," she tells the attendees of the 2014 Austin Food & Wine Festival, "but it's important to showcase the good work that female winemakers in the world are doing." From there, she proceeds to walk those present – probably about a hundred people – through a series of wines produced by women from around the world. In the process, she dispenses a mind-boggling amount of information about the winemakers, their history, the regions from which the wines emanated, and the various characteristics of each wine.

"Do you taste the mushroom?" she asks the crowd, smiling, of the Ponzi Pinot Noir.

Mazaite is charming, always beautifully dressed and clearly possessing a love of statement accessories (her latest is a delicate, sparkling engagement ring, which she twists absentmindedly as she talks). It's easy to imagine her holding court in the dining rooms of LaV, the newly opened high-end wine bar and Provençal-inspired restaurant on East Seventh, charming guests as she gently grills them on their tastes and preferences, culminating in the perfect wine selection for that evening's dinner. She is a bon vivant and a natural fit in her role as the face, sommelier, and managing partner of LaV.

Her partners at LaV provide just the right blend of personality counterpoints. Exec­ut­ive Chef Allison Jenkins is bookish and somewhat reserved; she once harbored dreams of a career in medicine but just couldn't make it past organic chemistry. Executive Pastry Chef Janina O'Leary is the driven one who sets her mind to something and doesn't stop until she achieves it. Together the three women form a dream team of "leaning in," making a high-profile splash in a field flooded with male chefs adored by diners and food media alike.

Last September, the Austin Business Journal published a story titled, "Meet Austin's celebrity chefs," featuring Jack and Bryce Gilmore, Tyson Cole, David Bull, Shawn Cirkiel, and, of course, Paul Qui. The absence of women on that list was annoying to many locals, but not as internationally incendiary as Time magazine's "The Gods of Food" cover last November featuring three male chefs. An accompanying "tree of influence" graphic depicted an international who's who of male chefs. When pressed by Eater National to explain this decision, Editor Howard Chua-Eoan stated, "We did not want to fill a quota of a woman chef just because she's a woman." Chua-Eoan's rationale for excluding enormously successful female chefs like Anita Lo and Alice Waters was that, as self-made women who had to "force their way to where they are now," they had not made adequate use of the boys-club network that defines the rarefied world of chefs.

And therein lies the rub: The problem is not that female chefs aren't as successful or influential as male chefs, the problem lies in the way we talk about them. According to Dr. Deborah Harris, associate professor of sociology at Texas State University, the cultural conversation about male chefs is couched in a notion of international empire building, while female chefs are discussed in terms of how they can make people happy.

By way of example, Harris, who is currently putting the finishing touches on the manuscript for Taking the Heat: How Gen­der Inequality Is Sustained and Challenged Among Women Chefs, co-written with her colleague, Dr. Patti Giuffre, and due out on Rutgers University Press next year, cites the way convicted felon-turned-Manhattan-restaurateur Jeffrey Chodorow talks about Miami chef Michelle Bernstein. In a June 2006 article in Food & Wine magazine, the author explains that Chodo­row chose Bernstein as the "concept chef" for his network of Social restaurants because she was "a perfectly marketable package – female, pretty, ex-ballerina, Miami-based, Latina, trained by some of the top-name chefs in the world." "We're going to give her tremendous exposure," Chodorow is quoted.

"The way they talk about Bernstein is Pygmalion-esque," says Harris. "'We're going to give her exposure, we're going to make her great,' rather than focusing on her skills." For men, the assumption is that they are already great, and that the natural next steps involve high-profile TV projects or opening new restaurants everywhere. 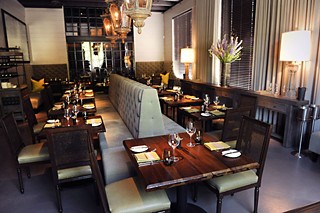 Which is to say, let's be careful about the way we talk about the women running the show at LaV. They are not aliens from outer space arrived out of nowhere to shake up the Austin restaurant scene, although the tenor of the discussions around LaV's leadership team in the run-up to the restaurant's early-March opening might suggest otherwise. These are seasoned, skilled professionals with impeccable credentials who have among them decades of experience in some of the country's most auspicious dining establishments. In short: They've got the skills to pay the bills.

Mazaite, who studied journalism and public relations in her home country of Lithuania before coming to the States, apprenticed under Rajat Parr, the wine director for the Michael Mina restaurant group in Las Vegas. She helped open that city's Wynn luxury resort, which attracted the attention of Paul Bartolotta, whose eponymous Italian restaurant has garnered critical acclaim since its opening in 2005. From there, she was recruited by Joe Bastianich and Mario Batali to work in wine service at Babbo in New York. After a few years there, the opportunity to work at the Little Nell, a luxury resort in Aspen, Colo., fell into Mazaite's lap. "I wasn't looking for it, but it was the best three and a half years of my life," she says. "That's where I met Allison and Ralph [Eads, the owner of LaV]."

Jenkins, from south of Dallas, was going back and forth between Aspen's Ajax Tavern and the Little Nell, where she eventually held the title of executive chef, when she met Mazaite. Like her counterpart, a career in food hadn't really been on her radar until her medical aspirations dissipated. After taking a summer course at Le Cordon Bleu in London, she returned for her junior year at Trinity University in San Antonio with a newfound sense of purpose. "It was revelatory in terms of there's so much to learn, I'm always going to be excited about it," she recalls. Her background in science didn't hurt, either. "I never understood the theory, but I could always pass the labs. I could go in there and make things happen, but I could never explain why. It was an almost easy jump from the chemistry to the cooking." After completing her training at the Culinary Institute of America in New York, Jenkins worked on Martha's Vineyard and in Santa Fe before landing in Aspen, where she worked six Food & Wine Festivals and fed an impressive assortment of celebrity chefs each season.

O'Leary grew up in a family of modest means in Del Rio, Texas, near the border. Early in life she decided that she wanted to go to culinary school, so she graduated from high school early and, at age 15, moved to New York to attend the French Culinary Institute (now the International Culinary Center) in SoHo. After completing the pastry program there, she decided she wanted to work at Thomas Keller's Per Se. She literally walked into a job one day when, during a snowstorm that prevented several kitchen staff from making it to work, she knocked on the back door of the restaurant and offered to work. Her four-year career at Per Se started that day. She was 16.

From Per Se, O'Leary moved to Batali's Del Posto to work as assistant pastry chef before moving on to work with renowned pastry chef Pichet Ong. Once O'Leary and her chef-husband learned that they were expecting their son, now 3, it was time to make some tough decisions. "We ultimately decided that New York wasn't the right spot to raise our son, and my husband came up with Austin, even though he'd never been to Texas." Upon their arrival, O'Leary chanced into a job with the W, working as the pastry chef at Trace until last fall.

Now then. Someone was saying something about a tree of influence?

While it is true that these women are all working in service to Ralph Eads' long-standing dream of having a wine-centric fine-dining restaurant – "My goal is to make LaV the premier wine destination in the country," he says via phone – all three women chose to take this leap with him. Both Jenkins and O'Leary had other offers on the table when they decided to join up with Eads and Mazaite.

"After I left the W, I thought I was going to take a little time off, maybe travel a little," says O'Leary. "I had a lot of great and enticing offers from local restaurants and some nationally acclaimed chefs. But after meeting the team at LaV, this just seemed to be the right fit at the right time."

"We all dream about opening a restaurant in this industry," says Mazaite. "You dream about it, but you sometimes don't even try to get there because it's a daunting project. It takes a lot of effort and money to open a place. [LaV] is amazing, and it just found us." When any of them speaks of Eads and his passion for this project, it is in terms of admiration and respect. Mazaite gets to live her passion for wine, Jenkins has free rein to express her local, seasonal point of view, and O'Leary is able to demonstrate her expert pastry skills while also balancing the demands of family life. It's not quite having it all, but it's pretty damn close.

This is the first in an occasional series spotlighting the women who have shaped Austin food.