The Gelato World Tour rolls into Republic Square Park this weekend, offering Austinites the opportunity to see gelato being made and to sample frozen treats from the top 16 gelato purveyors in the United States and Canada. This year's world tour will visit eight cities on five continents, making Austin the only North American stop after touching down in Rome, Valencia, Melbourne, and Dubai. At every stop, the top gelato flavors in that region are voted on by the public (50%), a technical jury (40%), and the other gelato makers in competition (10%), then the regional winners move on to the Grand Finale in Rimini, Italy. The event is organized by the Carpigiani Gelato University in Bologna, Italy, and supported by the Italian Ministry of Foreign Affairs and several major Italian companies that sell equipment and supplies to the gelato industry worldwide. They are also partnering with organizations in each city on the tour, such as the Sustainable Food Center here in Austin.

Gelato shops interested in being considered as potential contestants submitted flavor entries which were evaluated by a panel that included Houston chef/restaurateur Damian Mandola. The peanut butter and chocolate hazelnut swirl from Tèo Espresso Gelato & Bella Vita (1206 W. 38th) will be a featured competitor along with gelato flavors from two shops in Houston and one in Brownwood, plus a dozen others from the U.S. and Canada. We can be proud that Texas is so well-represented. In order for Matt Lee of Tèo to make the finals, Austinites need to turn out this weekend and vote. Viewing the demos and checking out the equipment is free, but tasting tickets for all that delectable gelato cost $10. 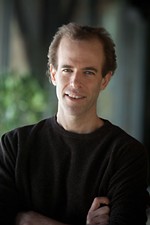