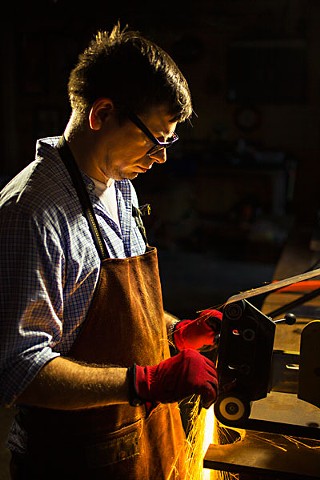 Travis Weige is a lean, thirtysomething, outdoorsy-looking gent whose real job is in media sales, working for a company based out of New York City. He lives in Sunset Valley in a comfortable older home and has his knife-making workshop set up in his garage. "I like to make things, and when I saw a knife-making video four or so years ago, I immediately thought, 'I can do that'," says Weige. "I consumed every knife-making book and video I could get my hands on. I watched countless hours on YouTube, cruised blademaster's web pages, and went to any knife show that I could. I got some basic equipment and materials, and started making knives until I thought I was getting pretty good. When my friends saw the knives I was making, they wanted one, and that's pretty much how it all got started. I have a one-year waiting list now," he says.

Seeing the difference between Weige's very first knife and his latest creations reveals the incredible progression of his artistry. "Most of the custom knives that are sold are just displayed by the folks that bought them; they never actually use them. For $1,500 to $10,000 they sit in cases and are brought out to look at," Weige points out. "I decided that I wanted to make kitchen knives, because I wanted my knives to be tools that actually got used all the time. I also wanted my knives to be more affordable."

A custom knife by a prominent craftsman starts at around $1,000 and goes up from there, which makes a knife by Weige (www.weigeknives.com) an absolute bargain at a base price of $325 – especially considering most craftsmen make a series of their own standard knife designs and don't really do a custom one-off measured for an individual. Weige's prices do go up, depending on the quality of steel, the wood chosen for the handle, and the degree of customization. But how's this for comparison: A blade made by Bob Kramer, the so-called King of Custom Kitchen Knives, can cost $10,000 or more – that's if you're able to buy one. Kramer holds lotteries for the right to be selected to place an order. The line of factory-made blades Kramer designed for Sur La Table starts at $250 and goes up to $1,900. Some of the highly acclaimed Japanese bladesmiths' knives, like an Ichiro Hattori, can cost astronomical sums, and the waiting list can be years long. (Quentin Tarantino portrayed it correctly with the Hattori Hanzo swords in Kill Bill.)

There are only 105 different master bladesmiths in the U.S., and Harvey Dean is the closest to Austin. "All of the truly great knifemakers are older, in their 70s and 80s," says Weige. "There are very few younger knifemakers. Around here the masters are Johnny Stout in New Braunfels, Harvey Dean in Rockdale, and Ernie Self in Dripping Springs, although he's mostly retired. These guys pretty much make only hunting knives." The older guys all teach, and all charge about the same for private instruction; they make videos on different techniques and teach larger workshops throughout the year, most of which fill up quickly. They also hold "hammer-ins" at private shops. These are invitation-only events, with 25 to 30 attendees each paying $250 or so to be able to watch one of the masters demonstrate some aspect of knife-making. "The hammer-ins are a real secret society thing; they sell out immediately, and you usually have to be known to even get invited," Weige explains. "I realized early on that to get really good I needed to study under a master bladesman, so I went and worked part of a day with Johnny Stout down in New Braunfels, but he wanted $2,500 a week to train under him, and I just couldn't afford it. All of the great knifemakers charge that much," says Weige. "Once I started to learn what I was doing, I realized that I needed much better equipment; it's highly specialized and hard to find. All of the machines are custom-made one-offs, and people that have them don't want to part with them. My belt grinder is a 20-year-old machine that I bought from Bob LeBlanc down in Brownsville. I have almost 400 grinding belts ranging from 36 to 1,000 grit. My horizontal grinder I found in Ohio, after months of searching. It took me almost a year to find a 24-inch kiln – most of them are much shorter, for making pocket and hunting knives. I had to totally rewire it once I got it here. I have $15,000 invested in machinery, and could use another $5,000 more.

"It takes me about 8 to 12 hours of concentrated effort to make a single knife once I start building it, but those hours are spread out over months of time. For it to be efficient and cost-effective, I move several blades through the same stages together in batches, and for some orders I make multiple prototypes. Once the blade gets fired, I devote all my time to that knife until it's finished," he says.

Weige buys the Niagara steel as raw alloy stock, then has to measure all aspects of it to fit the buyer's hand, shape the blade type that the customer wants, and then strengthen and harden it by repeated heating and cooling. It goes into an 1800°F kiln for about 20 minutes; this is called "the cook." It heats up to the point that it's almost soft, right on the edge of turning flaccid, and then it gets cooled slowly, before getting cooked again at a lower temperature for several hours before being cooled again. Each alloy has its own cooking formula, and different bladesmiths have developed their own formulas for "the cook" through the years. Those formulas are secrets that a bladesmith will never reveal.

Halfway through researching the article I decided to get a custom kitchen knife made by Weige. He had told me to bring a knife with me when I came over and he'd sharpen it; he sharpens blades as well. I took an old Henckels chef's knife that had gotten dull over the decades. As he studied the blade he said "... somebody has sharpened this with a wheel grinder in the past; that's just barbaric." I sheepishly admitted that we had a dude that came by the restaurant once a month to sharpen knives. "I do have a wheel grinder, but I removed the grinding wheel and added steel wool and sheep's wool wheels and made it into a great little polisher," he said. "Production knives come from the factory with a 25-degree edge," he said, as he worked the knife along the grinder belt. "I try to get mine to 15 to 10 degrees. The sharper the edge, the longer it will stay sharp." He used the belt grinder to get it to 15 degrees or so, then used two Japanese stones – the first water-based, the second oil-based – to hone the edge even sharper. He then suspended a section of new half-inch technical climbing rope from the ceiling and, with one quick horizontal motion, sliced cleanly through it as if it were paper.

I asked about the different steel alloys he uses (440C, 1095, and 154CM): "High-carbon stainless steel is mostly ad copy fluff. A mass-market knife is all about the shiny blade and the black handle. My knives are tools that work. I'll guarantee a 59 Rockwell hardness and resharpen it for you as long as I'm still around and you still have the knife." The Rockwell Hardness Test is a standardized test used to compute the hardness of steel, established by how far a diamond point penetrates a finished blade under a set amount of pressure; higher numbers indicate harder material. Hardness higher than Rc60 can be brittle and hard to sharpen, while hardness below Rc56 will be too soft, bendable, and not hold an edge well. According to Weige, Rc58 to Rc60 is pretty much the sweet spot for kitchen knives.

I selected the style, blade length, the pin style for the handle (pins bond the handle scales to the tang), and the handle scale material (there are dozens of choices in that category), and then it came time to measure me for the handle. Weige measures the hand for handle width, length, and grip, and also takes a drawing of the outline of the hand. He then affixes molding clay to a knife blank and has the user grip it as though you would while using the knife. Weige then cuts that clay off and retains the mold to use as a measure for forming the grip. We talked about the depth of the blade, since I wanted to make sure that my antiquated, semi-swollen knuckles had plenty of clearance from the cutting boards. A hundred bucks went down for the deposit, and in a couple of months I'll go back to pay the balance and check the fitting of the knife blade before it gets cooked and hardened. The perfectly balanced knife will finally be mine a couple of months after that, and I can't wait. My custom Weige knife will be used, religiously, I guarantee that. Kitchen knife art takes time, but more importantly, it takes a highly skilled craftsman.