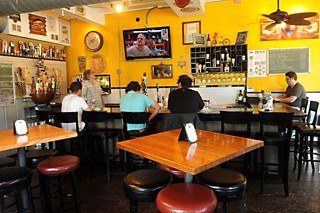 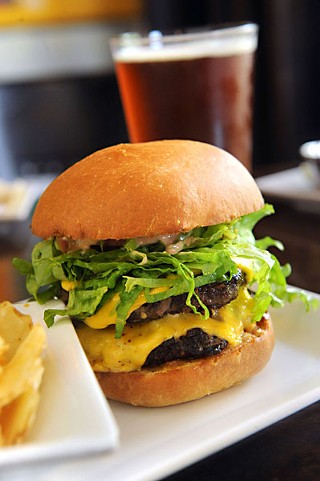 After a disastrous brunch service in September that saw multiple dishes sent back to the kitchen, I broke up with Hi Hat Public House. Drawn in by their well-curated craft beer selection, comfort-food menu, and Eastside location, I had desperately wanted the relationship to work out, but alas, a frigid helping of biscuits and gravy sealed our fate. "It's not you, it's the biscuits," I lamented. But hope was renewed when I heard that chef Thomas Reeh, formerly of Mars (now shuttered) and most recently Snack Bar, had taken over the culinary reins. My fully bridled optimism was again piqued; maybe we could work it out after all. 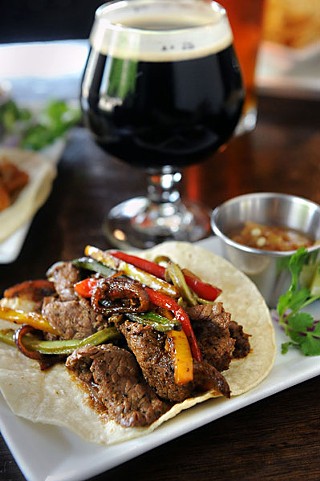 Owned by Steve and Rena Schrader and named in homage to the type of cymbal commonly found in drum kits, Hi Hat has maintained a stalwart following of craft beer loyalists, neighborhood revelers, and jazz enthusiasts. Open for almost a year and a half, that popularity has no doubt been fueled by the 24 beautiful taps and a regular Sunday jazz brunch. While the exterior of the condo/mixed-use building that houses Hi Hat sticks out like an ill-fitting thumb on the corner of East Sixth Street and Robert T. Martinez Jr., the location is prime, and the inside is inviting. Laid-back upscale with punctuated elements of jazz and quirk, a fivepiece silver-glitter drum set suspends from the ceiling and an illuminated, amber-colored antique brass saxophone sits atop the wall. Certainly, the place has its charms. Always one for second, third, and fiftieth chances, I ventured once again to the Hi Hat.

Surprised to see a nearly empty restaurant, save a few regulars at the bar for a Tuesday happy hour, my friend and I bellied up. Notably counter-service only, the amiable bartender helped us order. Exceedingly courteous, patient, and knowledgeable, I would later learn the bartender was indeed bar manager Habeab Kurdi. Well done, Habeab. My friend ordered the Bar Burger ($8) and a glass of the Drylands Sauvignon Blanc. I ordered a Ranger Creek OPA, an American pale ale with oats, as part of the regular Tuesday special – two tacos and a draft beer for $10 – and settled on a pork, pineapple, and cotija taco and a shrimp taco with slaw and jalapeño vinaigrette. After just a short wait, our food arrived. A welcome addition to the menu from chef Reeh, the locally sourced ranch beef burger with cheese, lettuce, tomato, and "special sauce" was juicy and delicious, served with chips and house-made pickles. Though slightly small for my hungry friend, the burger made up for in punch what it lacked in stature. She gobbled it up. My meal fared equally well. The shrimp were well-seasoned and perfectly cooked. The corn tortilla held together even after the addition of fresh jalapeños and salsa. As for the pork taco, the meat was tender, the flavors perfectly matched. As customary when imbibing Ranger Creek, I thoroughly enjoyed my beer. The relationship with Hi Hat revived in my eyes, I left the restaurant to write a glowing review, but my happiness was short-lived.

Looking forward to another go at the brunch, my companion and I biked ourselves to Hi Hat on a Saturday afternoon. Again, the restaurant was empty. For a 1pm brunch, this seemed slightly odd, but perhaps Hi Hat attracts the early riser crowd. I ordered a mimosa ($3) and the eggs Benedict ($12), comprised of a poached egg on an English muffin with chorizo, cilantro hollandaise, and cotija cheese. My friend ordered the quiche ($10), special for each brunch, this one with red peppers, farm-fresh veggies, and goat cheese, plus a Sake Mary ($8). Since we forgot one of the bike locks, we chose to sit outside with our bicycles. I went in and ordered first. She went in as soon as I finished and ordered hers; perhaps a two-minute stall. While I got my food almost immediately, she waited at least 20 minutes longer. This was especially disappointing since she ordered a quiche which would presumably already have been made. However, let's just say it wasn't premade, and though I could forgive the staggered wait time, the crust was burnt. Not entirely inedible, but clearly overbaked. Insult to injury, contrary to the overcooked quiche, my eggs Benedict was delivered barely lukewarm. The flavors were there, but it's hard to enjoy a poached egg at that temperature. We finished our plates, I ordered another drink, and we continued to sit and converse for no less than 45 minutes. During this time, no one picked up our dirty plates. The restaurant was empty and no one could be bothered to bus our table; sitting over dirty dishes would be the dealbreaker. It's sad, really – we could have been so good together.