Some of These Things Are Not Like the Others

How Thai Fresh accidentally became a mecca for gluten-free sweets 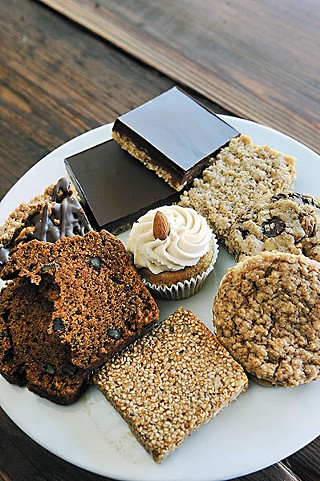 A Thai restaurant certainly isn't the first place you would expect to find a large bakery case full of stellar gluten-free treats, yet that is exactly what Thai Fresh Coffee Bar and Restaurant has to offer. What began as an amateur effort to simply bake a few things to fill an inherited display case has over time evolved into a thriving gluten-free bakery employing three professional bakers.

Jam Sanichat opened Thai Fresh in 2008 with her husband Bruce Barnes, after working for many years in the Austin restaurant scene. Initially, she worked as a waitress at Madam Mam's on the Drag while attending UT. After graduation she moved over to the American restaurant Hoover's Cooking, where she met Barnes. After the birth of their son, Leo, Sanichat began giving private cooking lessons, and then branched out into selling prepared Thai dishes at the Downtown Farmers Market. She named her fledgling Thai food business Thai Fresh, and in due time she added catering to her cooking lessons and prepared foods.

The next step was to give Thai Fresh a brick-and-mortar home. Renting the middle unit of a three-unit strip mall on West Mary Street, the original Thai Fresh was a Thai takeout deli and small grocery. Citywide response to Thai Fresh was so positive that the business expanded to inhabit the entire building. In the process, Sanichat ended up with a bakery case on her hands, not something usually called for with Thai cuisine. 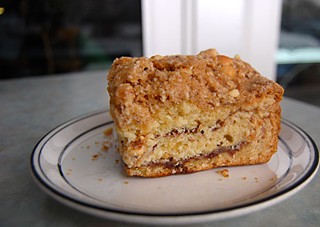 "Thai desserts don't have a lot of variety," Sanichat says. "Most are combinations of the same three ingredients – palm sugar, flour, and coconut milk. The sweets come in different shapes, but they all taste pretty much the same. I really had to branch out to fill that bakery case! So I started baking." Unfortunately, Sanichat is allergic to wheat. "I tasted what I was baking, and I suffered a little bit," she says. "Then I started trying different flours. I realized I already had lots of rice flour. I thought, 'How appropriate! Maybe we could go this way.'"

Sanichat did all the baking herself until the restaurant just got too busy. Eventually she hired baker Laura West to take over. By chance, West was an enthusiastic gluten-free baker and a vegan. By the time West left the job, the bakery case had become about 20% gluten-free.

The next milestone for the bakery was the hiring of baker Kaylee Walters. Walters, a vegan, was pursuing a scientific career when she decided to become a baker. "I was headed to graduate school when I changed course," Walters relates. "I realized, I love science ... but I really love baking!" Walters forsook the academy and opted to travel to Europe instead, where she volunteered her services under leading gluten-free bakers in Ireland and France. Baking standards in Europe are very high, and Walters came back with invaluable experience. She is passionate about experimenting with alternative flours and techniques. "I was going to be a chemist, a scientist," she says. "I love baking gluten-free and vegan. The chemistry involved is so interesting and challenging." 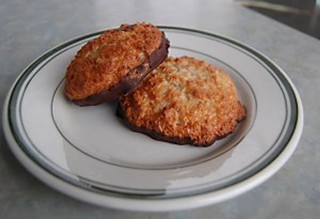 Sanichat attributes the success of the bakery to the hiring of Walters. "What the bakery has become, 90 percent of it is from Kaylee. She is an angel, a godsend." While making the bakery almost entirely gluten-free, Walters has also more than tripled its sales. When she began, there wasn't enough demand to provide even her with a full-time position. Demand has grown so much under her guidance, that not only does she work full-time, but Thai Fresh also employs two assistant bakers, Nicole Magnoli and Melissa Absolom.

Magnoli, also a veg-an, spent a decade in the corporate world before deciding to pursue baking. Absolom is a classically trained pastry chef. "Poor Melissa! I wrecked her world," laughs Walters. "Gluten-free is a whole different animal. But it has been really fun, too."

Besides providing glu-ten-free items, many of the treats in the bakery case are vegan, and some are soy-free as well. "Someone can walk in, no matter what their food issues may be, and find something to eat," says Walters. After more than two years, the gluten-free bakery at Thai Fresh has no equal. Many customers don't even realize it is a gluten-free bakery, because the products are so satisfying. Items rotate continually with selections from chocolate peanut butter pie and grasshopper cupcakes to tapioca parfaits and blueberry lemon curd cake. When sampling the remarkable wares, two things jumped out at me from the very start: One, nothing is overly sugary, as gluten-free baked goods can often be. The sweetness level is satisfying, but never cloying. Second: You would never know you are eating gluten-free.

The sour cream coffeecake is a great example. For many years in my youth I worked at the Old Pecan Street Cafe, a restaurant that was famous for its sour cream coffeecake. Sanichat's partner, Bruce Barnes, also worked there, and naturally I assumed that it was the same (or a very similar) recipe. With a light, moist crumb, its airy texture broken up with swirls of buttery cinnamon sugar, it is identical to the cake I remember. Yet, the Thai Fresh version is completely gluten-free. The blue­berry crumble bar is another sleight-of-hand. Rich and flaky, with a filling made from Texas blueberries, it is like a miniature slice of homemade blueberry pie. The chocolate-dipped coconut macaroons are a triumph. Crunchy, chewy, sweet, and chocolatey, they are decadence itself. Much larger than your usual macaroon, one is enough to perfectly cap off a Thai feast.

Thai Fresh occasionally offers the classic and universal Thai dessert, mango and coconut sticky rice, which is another naturally gluten-free delight. But Sanichat doesn't always have it on the menu. "The mangoes need to be perfect: sweet, ripe, and soft. If I can't get mangoes like that, I won't serve it." To replace the dish when the mangoes are too hard and too green, Sanichat has a full line of vegan, coconut milk-based ice creams, all of which are amazing served over warm sticky rice. "I used to do half dairy and half vegan ice cream," he says, "but just like the bakery, it just became all vegan after a while. The coconut milk base is just so good!"

"And vice versa," says Walters. "Some folks may come in wanting a coffee and a gluten-free pastry, but eventually they not­ice that Thai food is usually gluten-free too."

"Of course, a lot of people just buy a brownie or a piece of cake, and they don't know or care that it's gluten-free," says San­i­chat. "All they care about is that it's good!"