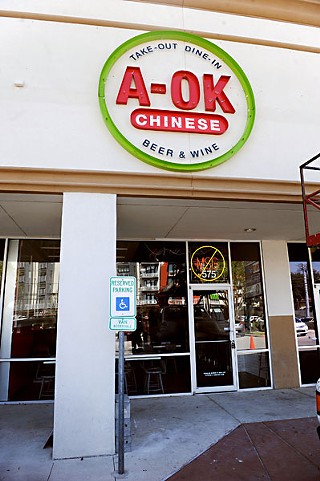 Here's an anecdote to give you an idea of the potential effect several months of advance publicity can have on a newly opened restaurant. After a very enthusiastic turnout for the friends-and-family soft opening (in which 80 people RSVP'd and 275 showed up) and a huge turnout on the official opening day this past Sunday, A-OK Chinese (1509 S. Lamar) co-owner Jerry Reid says his shell-shocked business partner, chef John Bullington, looked at him and said simply, "We're gonna need a bigger boat."

In keeping with movie references, one of the tastiest tidbits to come out of the recent Grand Budapest Hotel feast at the Alamo Drafthouse Slaughter Lane was that chef Trish Eichelberger turned us on to a new cream puff bakery in the West Campus area called Cream Whiskers (2222 Rio Grande, Ste. B-120). She discovered the new-ish business while trying to find someone to make the fancy cream puffs that are a key element to director Wes Anderson's comedy. The shop is the brainchild of University of Texas grads John Sun and Tina Yang, and they serve filled-to-order cream puffs with a variety of custards. Though Eichelberger ultimately decided to make her own desserts, Cream Whiskers has a quality product, and I'm curious to see how a business specializing in cream puffs will fare in Austin.

The hotly anticipated Silo on Seventh (1300 E. Seventh) opened quietly just before South by Southwest and will be slowly adding items to the simple burger menu as the weeks go on; turns out that rooftop deck is indeed a lovely dining spot. In that same neighborhood, both the Hightower (1209 E. Seventh) and LaV (1501 E. Seventh) are now offering brunch.

The remodel is complete and Murph Willcott has announced that Texas French Bread (2900 Rio Grande) is finally licensed to sell beer and wine. In describing their new wine list, Willcott says he sought out food-friendly wines that are produced bio-dynamically or organically, in keeping with the purchasing habits of the restaurant – mostly Old World-style wines reflecting a true sense of French terroir that would complement the bistro's French country fare. It's also still possible for customers to bring their own wine to enjoy while dining at TFB.

The Austin Food & Wine Alliance has announced the date and chef lineup for Live Fire!, their annual spring celebration of "beef supremacy and flame mastery." The popular event is scheduled for Thursday, April 17, from 6:30-9pm at the Salt Lick BBQ Pecan Grove Pavilion and tickets are on sale at austinfoodwinealliance.org. Proceeds from this event go to fund the annual culinary innovation grants awarded by the Alliance. Chefs from Austin, Houston, San Antonio, and Dallas will be taming the flames and the party always sells out, so get those tickets now. In other food and wine news, the Austin Food & Wine Festival, scheduled for April 25-27 in Butler Park, has announced the expansion of the Chef's Showcase feature at this year's event. A lineup of 18 local chefs will present signature dishes in a tasting tent on both Saturday and Sunday of the fest. Tickets are still available at austinfoodandwinefestival.com.