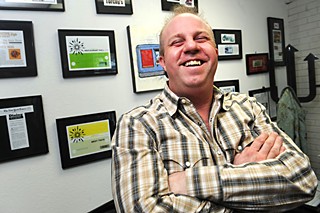 Restaurant chains may seem like a modern American phenomenon, but they actually have deep roots in American culture dating back to the late 19th and early 20th centuries. Entrepreneur Fred Harvey's Harvey House epitomized fine-dining food quality and service to railway customers from the 1870s through the 1950s, and Howard Johnson followed suit with eateries attached to hotels and motor courts after automobiles became the preferred method of transportation. Chain restaurants with standardized menus and service methods could be counted on to deliver the same dining experience in each outlet and that reliability appealed to a significant portion of the American dining public.

So, what is it about Austin that makes it a good proving ground for homegrown restaurant chains? Do we take proprietary pride in eateries that come to life in our own backyard? Or is it just that our culinary creative class turns out special ideas and we appreciate a job well done and support it with our dining-out dollars? Austin's rapidly evolving culinary scene is busy generating successful chain restaurants in the same market that embraces quirky food trucks, artisan barbecue joints, and high-profile fine dining. We talked with the owners of two of the fastest growing chains – one a classically trained chef with a passion for food, the others, two savvy young businessmen with a salable idea – to get an idea of what it takes to get a successful Austin chain off the ground.

Before moving to Austin, Virginia native and Johnson & Wales culinary graduate Michael Rypka had a pretty high-powered career as a corporate chef at such places as the World Bank in D.C. and Enron in Houston. Once here, he became corporate chef for Comida Deluxe, then the parent company for Chuy's and other restaurant concepts owned by longtime Austin restaurateurs Mike Young and John Zapp. "Actually, I attribute much of my success with Torchy's to learning about entrepreneurship from them," Rypka says. "They've been very supportive and enthusiastic about my company."

While still at Comida Deluxe, Rypka started investigating the food truck trend; soon after, he struck out on his own as one of Austin's food truck pioneers, alongside Hey Cupcake and Flip Happy Crepes. He launched the first Torchy's Tacos trailer on an empty lot overlooking Bouldin Creek in August of 2006. After an enthusiastic reception, he created the South Austin Trailer Park & Eatery, where he leased space to additional trailers, provided parking, and offered a covered dining area. "The landlord gave me a long-term lease and said he didn't care what I did there as long as I didn't cut down any trees or decide to build any condos," Rypka recalls. Once the trailer park was successfully established, Rypka began considering expansion. "At that point, I figured if I could get into a brick-and-mortar spot, I'd be happy," he says.

Rypka and his investors initially broke into brick-and-mortar eateries by picking up leases on small, failed restaurants and giving the available facilities a "Torchy's" spin. "We did our first few that way, expanding mostly just from customers approaching us, wanting to know when we were going to do one in their neighborhood," he says. The company soon began expanding on a larger scale and now has 21 outlets in Austin, Round Rock, Cedar Park, Houston, Dallas, Fort Worth, and Lubbock; No. 22 opens soon in Waco. They've stuck to the Austin metro area and Texas college towns so far, but out-of-state expansion is a possibility: "We're considering dipping our toes in Colorado." Some Torchy's outlets in other cities already offer full bar service, but the first local Torchy's to boast a "Firewater" menu will open in the Mueller development this summer. "We're still primarily focused on food, but offering alcohol does give people an extra incentive to spend money," he explains.

As the company developed momentum, Rypka stresses that a key element to the successful expansion has been developing an ownership and management team with complementary skills. "Our group consists of Alfonso Angelone [director of IT], Jay Wald [in charge of operations], Farrell Kubena, who oversees real estate and construction, and his wife, Rebecca Kubena, who takes care of finance and insurance." Rypka also says employee retention and promoting from within have been crucial elements to Torchy's progress. When asked about advice for potential culinary entrepreneurs, Rypka offers this encouragement: "Put a lot of effort into finding the right people and make sure to keep a local, non-corporate feel to things." 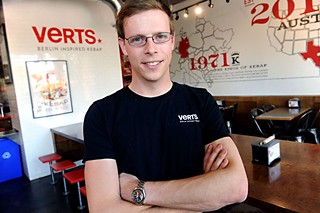 When German business students Michael Heyne and Dominik Stein did their junior year abroad on the campus of Southern Methodist University in Dallas in 2008, they spent a fair amount of time investigating why their homeland's most popular immigrant street food didn't seem to exist anywhere in America. "Döner kebap is a dish that came to Europe with Turkish immigrants. Family-run kebap shops account for 50 percent of fast food sales in Germany," Heyne explains. When the two friends realized the only reason doner kebap didn't exist here was a lack of familiarity, these astute young men recognized a potential business opportunity. With the success of Chipotle in their minds, they began to consider the best American city in which to launch a healthy, fast-casual restaurant chain.

That dovetailed with another search: Which American campus to choose for their MBA program? They considered schools in Atlanta, San Diego, and New Orleans, but recognized that Austin shared many similarities with Berlin – an educated population, plus thriving art, music, and culinary scenes driven by young people. And besides, Heyne says that after spending a year at SMU, they'd gathered that "everything cool comes from Austin." So, Austin it was.

Three days after graduating from UT's McCombs School of Business in August of 2010, Heyne and Stein launched their first two Verts Kebap outlets on Guadalupe, right across the street from the UT campus. Their friends and family provided the initial investment, and they did much of the design and construction themselves. In keeping with that DIY aesthetic and a desire to operate a green business model, the new shops were efficiently promoted with a tricked-out Smart Car that would charge up and make 90-minute forays around town selling kebaps. Offering fresh, substantial entrée servings under 600 calories and salads at 250 calories, their menu was an immediate hit with health- and price-conscious Austin consumers.

Verts has since opened 10 stores in the Austin metro area, with the partners still doing much of the labor themselves – although expansion means spreading the workload around. "The Anderson Lane store was the first one designed by Michael Hsu," Heyne reports, "and the Mueller outlet is the first one we didn't build ourselves." They're opening four stores in Houston this year with a planned total of six, and they have plans for stores in Dallas, as well. They are keeping their ownership and management team small and plan to retain company ownership of all the outlets.

Heyne handles marketing and operations while Stein covers finance and human resources. They go over Yelp reviews every week and respond to negative posts personally to solve problems. They are also still developing menu items, such as falafel, as well as operating systems as the young company grows. For example, Heyne says, "Only now have we been able to start recycling, which had been in our plans all along." They are especially proud of partnerships they've developed with other local companies, including FODA Studio, New World Bakery, Live Oak Brewing, (512) Brewing, Independence Brewing, and White Mountain Foods.

Though the Verts founders jumped into the restaurant business with no food background whatsoever, they are confident in their unique product and their business model – and for good reason. This fast-casual chain appears to be on the fast track to success. 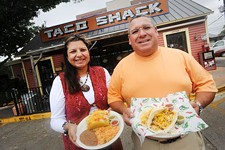 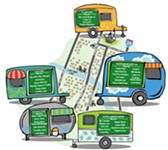