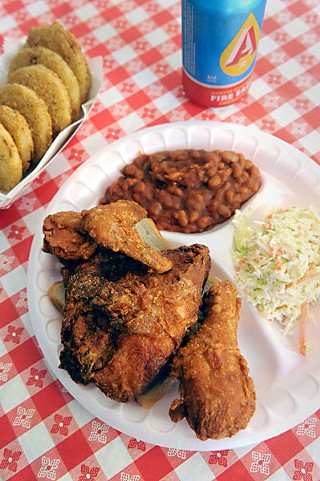 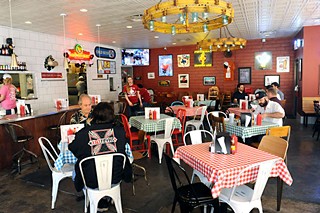 OK, so this is not a local business, and we usually don't review chain restaurants. However, this particular restaurant is the first Texas outlet of a famous Memphis fried-chicken chain, and when the chicken is the best darned fried chicken I've ever had, you can bet I'm going to write about it. Late last year, Gus's World Famous Fried Chicken moved into the Downtown spot long held by Mongolian Grill. They've completely cleaned up the space, turning it into an attractive Southern-style diner, with white subway tile surrounding the open kitchen, a small counter, and lots of blues memorabilia on the walls. The ambience is as fun and laid-back as expected, with music to match the Memphis vibe. 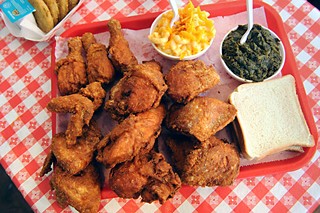 The simple menu includes chicken by the plate or individual piece. Plates come with a choice of two or three pieces: white, dark, or the "half chicken" option – one piece of each. Plates come with baked beans and slaw, but substitutions are allowed for 50 cents extra. We started with a couple of cans of Austin Beer Works brew ($4.50) and a plate of the best fried green tomatoes ever ($6.75): completely crispy on the outside, piping hot and juicy on the inside, and with the full flavor of tomato unmasked. We were about to order the fried pickles, too, when our entrée plates arrived: a two-piece white plate ($7.25) with the standard beans and slaw, and a "custom" plate consisting of a leg, a thigh, and a wing with turnip greens and mac and cheese as the sides ($8.78, including the side-substitution charges). The chicken is truly unbelievable: perfectly crisp and golden outside, while still incredibly moist and juicy all the way to the bone. Be warned: It's spicy; it will set your lips tingling and slowly tease your tongue to keep eating more. We're not exactly sure what makes it spicy, since we didn't see traces of red sauce or specks of cayenne in the coating. Could it be a bath in pickled jalapeño brine? Whatever the secret, it makes for seriously addictive chicken.

Unfortunately, we were not equally enamored of the side dishes. The plates come with plain, white bread – no biscuits or hush puppies. In classic Southern style, most of the side dishes tend toward the sweet side. The beans are likely seasoned with ketchup and brown sugar, the slaw is tossed with a light mayonnaise, vinegar, and sugar dressing, and even the turnip greens had a hint of sweetness that was not to my liking – I prefer my greens vinegary and spicy. But I devoured the creamy mac and cheese without a problem. As far as we could tell, every table around us was leaving their plates clean.

Our only real complaint is that Gus's uses Styrofoam plates and plastic cutlery to serve its food. When we inquired about it, our excellent server told us "they are working on it." I guess old chain habits die hard, but we hope that progress can be made in that respect. I have full confidence that things will move toward a more Austin-like philosophy, since Gus's is lucky to have enlisted veteran Austin restaurateur Brian O'Neill (formerly of Bistrot Mirabelle, the Belmont, and Max's Wine Dive, among others) as its general manager. In a follow-up call, O'Neill told us he spent two weeks in Memphis learning everything there is to know about how to make proper fried chicken. "It's hard work," he reports. "I thought I knew how to make fried chicken. After a week in Memphis, I realized I knew absolutely nothing. There are so many steps, so much to take care of in order to maintain the quality and the standard for perfect chicken." So far, whatever they are doing is working fine. But for next time, I'd love to see real plates and cutlery – or at least compostable disposables – so I don't get a dose of environmental guilt with my awesome chicken.

Not eating all of my sides allowed me to save room for the best coconut chess pie in town ($2.50 a slice, $15 whole). The menu also includes other chess pies – I hear the chocolate chess to die for – and pecan and sweet potato pies. But we'll have to save that for next time ... which may just be next week.