Restaurants scramble to open in time for SXSW 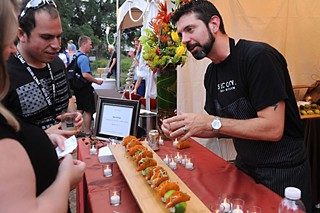 The James Beard Foundation announced the awards nominees for the 2014 season and three Austinites are among them: Both David Bull of Congress and Bryce Gilmore of Barley Swine are finalists in the Best Chef: Southwest category, while Philip Speer of Uchi is a finalist for Outstanding Pastry Chef. Well-deserved kudos to all three.

The Austin Food & Wine Festival announced the program schedule this week and added the names of two more chefs to their list of visiting culinary celebrities. Molecular gastronomy whiz and Top Chef: All Stars winner Richard Blais will be joined by Mexican cuisine expert Rick Bayless at the festival, April 25-27. For complete details and tickets, go to www.austinfoodandwinefestival.com.

The advent of South by Southwest means we're in for a flurry of restaurant openings. Daniel Brooks and Claude Benayoun held soft openings for Licha's Cantina (1306 E. Sixth) last week and opened to the public during the weekend. Brooks' Mexican street food menu, paired with Benayoun's expertise in fostering a busy bar scene should add up to a hit here... Houstonian Ralph Eads entertained a few hundred of his closest friends at a glittering, tented soiree to launch the new East Austin restaurant and wine bar laV (1501 E. Seventh) last Friday. Since last spring, sommelier Vilma Mazaite and chef Allison Jenkins have been the local face of the laV operation, getting to know the Austin market with the Say laV food trailer and participating in community events, but their friend Eads is the owner who purchased an entire city block on East Seventh to develop this new project. Party guests enjoyed guided tours of the attractive new restaurant designed by McAlpine Tankersley Architecture, a buffet of perfectly executed French bistro classics and Janina O'Leary's dainty desserts, and ended the evening dancing to Jerry Jeff Walker's greatest hits. This new place with three talented, powerhouse women running the show could be a game-changer for fine dining in East Austin when laV opens March 6.

In the same neighborhood, the Wonderland bar (1104 E. Sixth) is set to open March 1 in the former Cheer Up Charlie's space. Also debuting on the property is the newest trailer-food concept from Paul Qui, Thai Changthong, and Moto Utsunomiya: Thai-Kun at Wonderland will be dishing up their versions of Thai street food specialties... Chef Brandon Martinez reports that if all goes well with the final inspections this week, the new location of Noble Sandwich Co. (12233 RR 620 N.) should be open by the weekend, with the Midtown spot at 4805 Burnet Rd. hot on its heels by midmonth.

Mark Schmidt's eagerly awaited Blackbird and Henry (3016 Guadalupe) opens Thursday, Feb. 27. Should be a great addition to that neighborhood... Restaurateur Hoover Alexander says that he's adding fried chicken and biscuits by the piece and the plate to the menu by March 6 at the food trailer that sits directly across the street from Hoover's on Manor Road. The Austin native also reports that he's signed an agreement to open a Hoover's Cooking outlet across from Gate 8 at the Austin-Bergstrom International Airport sometime later this spring.