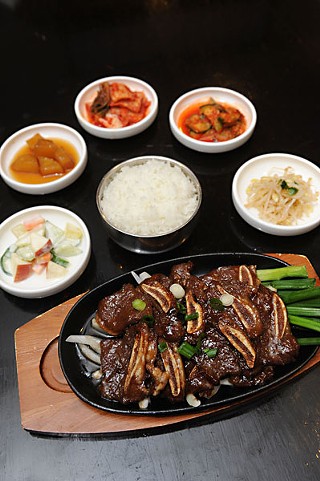 Sometimes it's fun to discover a restaurant that eschews frilly interior design and boisterous fusions de cuisine in favor of good, simple fare served in a welcoming, family-centric environment. MoMo Korean Cuisine and Sushi presents exactly this, with its traditional Korean dishes paired side-by-side with Japanese food. Open since last fall but only recently celebrating its official grand opening, this new addition to Austin's Korean food scene is comfortably unassuming, but offers a lovely meal at a reasonable price.

Family-owned and -operated MoMo is partially hidden in the corner of the Barrington Oaks shopping center on Spicewood Springs, in the space vacated by Maharaja Cafe. Upon entering, we were immediately and warmly greeted, and the friendly demeanor continued for the duration of the meal. Within minutes, the sushi chef – also the owner – flashed a huge smile from his station window, and our teenaged server had learned the name of the youngest member of our party. They developed a hilarious rapport and, frankly, this alone warrants a return trip, because it is a rarity to feel wholly welcomed when dining with small children at a nice spot with no designated kids' menu. The small dining room is clean and features subtle black and white decor, with lovely paneled murals. On our Wednesday evening visit (we braved rush hour to dine here), there were five or so other tables of patrons, ranging widely in age, ethnicity, and party size. The Olympics were quietly broadcast on a single wall-mounted flat-screen; no blaring music, no obtrusive fluorescent lights, just the gentle sounds of conversation and clinking dishes, of which there was a bounty.

We jumped in head-first and hungry with gyoza ($4.95), one of my all-time favorite dishes. The six pieces of deep-fried chicken dumplings (also offered steamed) were perfectly crisped without being greasy, the chicken was flavorful and well-textured, and the usual dipping sauce of soy, scallions, and chili flakes was just the right complement. We ordered a large nigori – cold, unfiltered sake ($8.95) – and although it took a little longer than expected to be served (presumably because the teenage waitress had to defer this task to the wife/co-owner), it came with one of the most delightful painted ceramic sake cups (ochoko) I have ever seen. It's these little touches that add up to making a restaurant a favorite dining destination. Our other appetizer, the haemul pajeon ($10.95), could easily double as an entrée. It was delicious, but we only managed to devour half of the heavy, 10-inch Korean-style pancake, stuffed with seafood and vegetables. The large pieces of octopus and squid were fresh, the green onions complemented nicely, and the batter was browned and crisp on the outside with a soft interior.

Of the two sushi rolls we ordered, both were nicely rolled with fresh ingredients and were actually larger than anticipated. Fully aware of the plethora of dishes headed our way, we went for a standard issue Spider Roll ($9.45) and, later, a tasty Black Dragon Roll ($9.95), with crab, avocado, and cucumber topped with eel and eel sauce. Given the emphasis on family-style food, I made a note to gather a posse for the next visit and try one of the more elaborate and enormous sushi displays offered: the Samurai, Shogun, and Emperor boats, ranging from $52.95 to $94.95 (price includes miso soup and a house salad). I'm also curious about MoMo's budae jji gae ($24.95), a classic stew with beef and pork, kimchi, udon noodles, veggies, and rice cakes, portioned to stick to the ribs of multiple people. For the less adventurous, the menu also offers such niceties as chicken or salmon teriyaki and à la carte nigiri.

For the uninitiated, the staple Korean dish bulgogi ($12.95) is the Asian equivalent of Tex Mex-style fajitas with their standard accoutrements. Served on a cast-iron hot plate, the thin slices of marinated beef are coated in a sweet special sauce, mixed with various veggies, and served with steamed rice and a boatload of banchan, or sides, including gamja jorim (potatoes sweetened and cooked in soy sauce), apple salad, mung bean sprouts, kimchi, and garlic broccoli. MoMo's version was well-executed and a unanimous favorite of the meal. We also ordered the dolsot bibimbap ($11.95). Another classic Korean dish, the very hot stone pot (the dolsot) is filled with rice, quartered zucchini chunks, shredded carrots and cabbage, sprouts, and crumbled beef, then topped with a fried egg. Had the egg been runnier so the gooey richness of warm yolk could saturate the mix, and had the rice been browned to golden in the bowl's bottom layer of sesame oil, I would have been over-the-moon about this dish. As it was, the freshness and flavor shined once we added the chili sauce, thoughtfully served to the side in a plastic ketchup bottle instead of dolloped on top, which made it great for sharing.

There is always room for mango ice cream ($3.45), and the two giant scoops served were a sweet, creamy finish to a satisfying meal. With so many items yet to discover, and the promise of a friendly staff, MoMo is worth a trek back to the 'burbs, hungry friends in tow.