Sweets With a British Accent 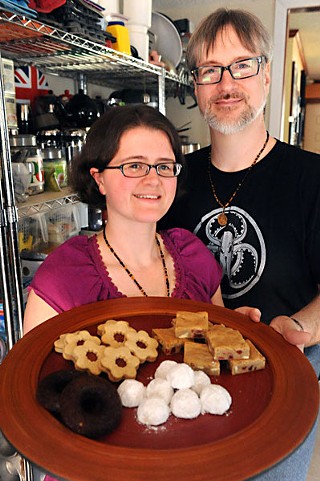 Airy king cake topped with colorful sugar crystals. Crunchy almond toffee. Dainty currant scones. Real butter mints. French vanilla ribbon cookies. Mincemeat tarts. Raspberry marshmallows. Chewy pecan pralines. These are a tiny fraction of the exquisite treats made by Curious Confections (www.curiousconfections.com). Begun in 2011 by Gemma and Michael Matherne, this small baking operation was one of the first in Austin to take advantage of the Cottage Food Bill, which made it legal to sell certain types of food prepared at home. They've been making new converts and gathering loyal fans ever since.

The Mathernes' story is mirrored in the range of sweets they create: If you read that list again, you will see both a strong Louisiana influence and the definite stamp of Great Britain, for Gemma is English, and Michael grew up half a world away in New Orleans. After a thrilling Internet courtship, they both moved to Austin, got married, and started a business together. Against all odds, they are happily married still, and it is wonderful to see how supportive they are of one another. Gemma, a graduate of Le Cordon Bleu College of Culinary Arts, is a consummate baker and confectioner. Michael has a background in design and deep roots in Southern cookery traditions.

Michael's design skills come to the fore in their birthday, wedding, and special occasion cakes, which combine breathtaking visuals with scrumptiousness. Displeased with the flavorless, saccharine taste of commercial fondant, they try to decorate their cakes with alternatives, such as modeling chocolate, pure buttercream, and homemade marshmallow frosting. Both Gemma and Michael consult carefully with every client, and their customers positively rave about the results. (Cakes must be ordered in advance, and can be picked up or delivered.)

Gemma's talents and hard work are evident in the range of flawless items Curious Confections sells each Sunday at the HOPE Farmers Market. Gemma rotates her wares, selling an entirely different assortment every week. The only constants are butter croissants and pain au chocolat, which she bakes fresh each Sunday, and individual king cakes, which will be available until Mardi Gras. Orange scones, strawberry rhubarb hand pies, cashew nut brittle, cinnamon sugar doughnuts, amaretti cookies, orange-cranberry coffee cake, handmade chocolate bars, millionaire's shortbread, and pfeffernüsse appear (and disappear) weekly, as do British specialties such as bara brith, hobnob biscuits, and their take on Jammie Dodgers.

When I asked Gemma what the initial response was to British sweets in sunny Texas, she replied, "Well, there are always some British ex-pats who are thrilled to see familiar sweets – you would be surprised how many of us there are!" She went on to say how interesting it is that Southern treats are so similar to English ones. "A true English scone is more like a Southern buttermilk biscuit than anything. Rocky road is nearly the same as tiffin. And Jammie Dodgers are just a tidier version of thumbprint cookies."

Curious Confections has been selling at the HOPE Market for only a few months and already they have become an anchor vendor, attracting a following that comes to the market expressly to buy their cookies, candy, and pastry. Moving into a commercial kitchen is the next step, and after that, the couple hopes to open their very own brick-and-mortar.