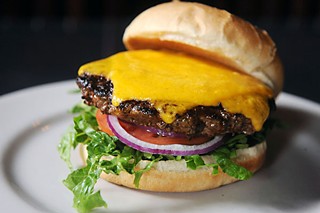 Cheerfully and unabashedly anachronistic, Austin Land & Cattle Company boasts no foams or fermented potatoes or dehydrated marshmallow powders. Instead, there is classic steak house fare: rib eye, sirloin, filet mignon, New York strip. Yes, there are potatoes – mashed and two cuts of fries. There is shrimp cocktail, escargot, and fried mushrooms. This is deeply American cuisine: simple, elegant, and for the most part, expertly prepared. Which is why, after two decades, ALC enjoys a well-earned reputation as the go-to steak house in the city. 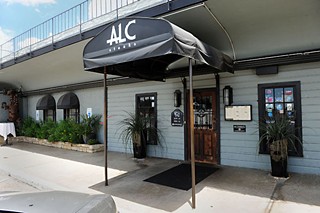 In reality, though, there are two ALCs, and each tells the story of how a traditional steak house manages to stay relevant in an ever-changing culinary landscape under the leadership of owners Christian and Theresa Mertens.

For those seeking a destination spot for birthdays, anniversaries, or just a comfortable, upscale family meal, the main restaurant is the best bet. On Sunday night, diners can opt for a three-course, prix fixe menu ($35), for which a portion of the proceeds go to various local charities. This is a very good value consisting of a starter, a protein with one accompaniment, and a dessert. We chose this option for our hungry son, selecting a Caesar salad and a sirloin steak, but the biggest hit on his dinner plate were the mashed potatoes, which he inhaled in a blink, then asked for seconds. He did not care for the fudge brownie pie that completed his dinner; it was indeed too gelatinous to be considered a brownie, and the chocolate flavor lacked depth. Although there are options beyond beef on the menu, we stuck with the restaurant's titular protein. My 10-ounce rib eye ($32) was tender, simply seasoned with salt and pepper, and virtually flawless. Paired with a loaded baked potato, it was a hearty yet elegant meal. And while I am of the opinion that a good steak doesn't need a sauce, we were curious about what ALC had to offer. My husband ordered the house-made chimichurri sauce ($2) to go with his 10-ounce sirloin ($28), and it was herbaceous and delicious. On another visit, we got the ALC homemade sauce ($2), and it was umami-rich, with a bit of a kick to finish.

We rounded out our meal with a shared crème brûlée ($6.50), which was a mild disappointment: The brûléed caramelized layer was too thick, resulting in a crunchy sugar glass that overpowered the delicate custard underneath. My parents' tiramisu ($7) had a nice balance of flavors and wasn't soggy, which is so often the bane of the layered dessert. 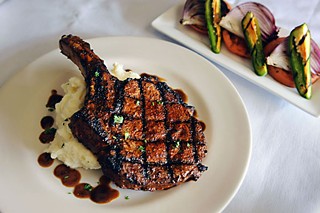 The dining room is an homage to high-end folk art and Western memorabilia, which is to be expected in a steak restaurant in Texas. On the other hand, the bar area, its walls adorned with guitars and other musical memorabilia, is a more relaxed, Austin-appropriate space, ideal for happy hours, casual dates, or an early stop on a night out with friends.

On a Saturday night, we enjoyed a solid hour of people-watching in the bar, witnessing parties of black-tie-clad patrons enter followed closely by parties in T-shirts and jeans. Our table was situated between a well-dressed, foul-mouthed man who knew nearly every visitor who passed by and a family of five whose children were well-mannered and very excited about their burgers. Rightly so, as the ALC Burger ($9) is one of the best hamburgers I have ever had – rich, juicy, and simply seasoned. The bar menu is also a great way to experience a variety of the steaks on offer at ALC in the form of the steak sampler ($11), two-ounce cuts each of velvety filet mignon, rib eye, and sirloin. We split a slice of the house-made ALC vanilla cheesecake ($7), which was magnificent – tender, not too sweet, and of the perfect consistency. Simply put, in the bar, we had fun while also enjoying an excellent, casual meal.

With the addition of a catering truck that makes appearances at events like Fun Fun Fun Fest and SXSW, and what appears to be an incremental rebranding effort, moving from "Austin Land & Cattle" to a hipper, more youthful "ALC Steaks," the establishment proves itself capable of evolving along with Austin's culinary landscape while also upholding the traditions of upscale steak houses in the form of a peerless dining experience. It's the best of both old and new Austin under one roof. 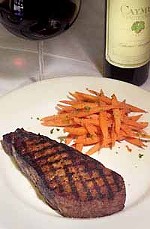