From Russia, With Love 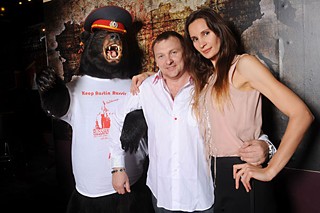 The first thing one sees upon walking into Russian House is the giant taxidermied black bear guarding a costume closet filled with military greatcoats and fur hats. These entry-level signifiers of Russia should be easily recognizable to any American born before 1990. But advance a bit more deeply into the restaurant and guests will encounter both the uncanny and the alien, artifacts of a culture that for many Americans remains mysterious and eminently foreign. What shouldn't be foreign, though, is the food.

Russian food in Austin is a rare find, and Austin businesses trading in eastern European culinary products have not fared well over the long term. The European Bistro in Pflugerville, which enjoyed a decade-long tenure serving everything from Hungarian paprikash to beef stroganoff, shuttered in 2012. Sasha's Gourmet Russian Market in Allandale, which offered eastern European groceries as well as takeaway borscht and blinis, lasted a mere six years, closing its doors in the spring of 2013. As such, Austinites are not well-versed in Russian food, much to Varda Salkey's bemusement.

"The first response is very interesting," explains Salkey, who owns and operates Russian House with her chef husband Vladimir Gribkov. "[People say] 'Oh, I'm so scared! It's so scary, I don't know what to order!' The food is very similar, Russians eat the same thing, the same beef, same chicken, the same product, just cooked a little bit differently." 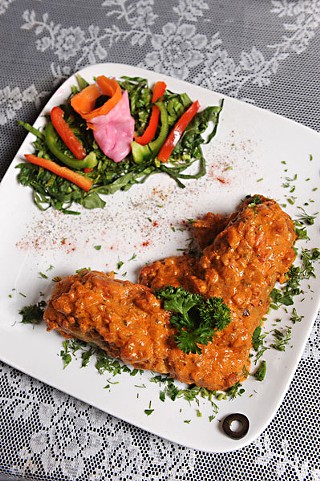 "There are very few things that you could distinctly say are Russian food," says Dr. Mary Neuburger, director of the Center for Russian, East European, and Eurasian Studies (CREEES) at UT-Austin. "But when you go to Russia, there are certain things that they eat a lot of, [such as] smoked and cured fishes, a lot of meat, black bread, borscht, a lot of pickled vegetables. A lot of beets and cabbage-based things. In the summer they frantically harvest and then they make all these different pickles to eat during the long winters."

Because Russia itself is an enormous country with diverse geographic features, the menu at Russian House is necessarily huge. It's helpful to think of the regions represented on the menu in two parcels: the East European Plain, comprising the Baltic states and what's considered "Euro­pean Russia"; and the West Siberian Plain, which includes the arctic tundra to the north and east (Siberia) and dry steppes to the south (where Russia borders Mongolia and Kazakhstan). "We tried to narrow it down as much as possible to the most traditional or famous dishes," says Salkey. "That's why we have a buffet at brunch on Sunday, so [Vladimir] doesn't have to stick to the menu and he can introduce people to other, new things."

Foods on the extensive Russian House menu that represent the East European Plain include Ukrainian borshch, a beet-based hot soup studded with chunks of beef and potato and garnished with parsley and a dollop of sour cream. Paired with a pirozhok (a bun filled with meat), it's the typical Muscov­ite's lunch, according to Ashley Squires, a recently minted Ph.D. from UT who now works as the associate director of the Writing and Communi­cations Center at the New Economic School in Mos­cow. "You will find borsch on just about every restaurant menu in Moscow, even if that restaurant specializes in, say, French food," she writes via email. Eaten in the main dining room at Russian House, which is outfitted with homey furniture and knickknacks imported from Russia that are eerily familiar – apparently, granny chic transcends cultural boundaries – these dishes rapidly narrow the gap between scary and recognizable.

Representing the West Siberian Plain on the Russian House menu are pelmeni, meat-filled dumplings reminiscent of Chin­ese dumplings or even tortellini. Served with a plate of sour cream and other sauces for dipping, they are generally believed to have originated in Siberia as an effective way to preserve meat for the winter. The foods of Uzbekistan, best represented in the form of Uzbek plov (pilaf), serve as the bridge from Europe to Asia; diners can enjoy dishes like these in the private Uzbek dining room at Russian House, the walls of which are lined with tapestry rugs and traditional Uzbek clothing.

Representing the Caucasus region, where the Winter Olympics will be held in Sochi this year, is shashlik, meat and fish kebabs that clearly bear the influence of that region's proximity to the Middle East, particularly Turkey. Accord­ing to Squires, shashlik is ubiquitous in Russia because "Georgian food is to Moscow what Mexican food is to Austin or San Antonio. It's been heavily incorporated into the traditional foodways, but still remains its own thing."

Much like America, Russia is a melting pot, a mishmash of cultures brought together via geopolitical upheavals and globalization, a slice of which Austinites can encounter at Russian House, whether it's over a meal or at one of their dozens of celebrations of Russian holidays or at the free Russian-language classes every Wednesday at 5pm. "I take pride in representing our country here. I want people to come here and feel a little bit of Russia," says Salkey. "Maybe they've never been to Russia before, maybe they'll never even go. But I want them to taste what Russia is, to feel welcome, to meet Russians, and get as much exposure as possible."

Exposure to Russia is not something many Americans have in abundance. For generations of Americans, Russians were the bad guys in our cultural imagination, bent on stealing our state secrets or parachuting into the mountains of Colorado and murdering strapping high school boys. Like other European countries during the 18th and 19th centuries, Russia struggled to balance the whims of the aristocracy with the energy of the proletariat. In 1917, the Rus­sian revolution led to the dissolution of the tsarist regime, which controlled all of the country's wealth via a feudal hierarchy. When the Bolsheviks, led by Vladimir Len­in, took control of the government in the October Revolution of 1917, they set the wheels in motion for the creation in 1922 of the Soviet Union, a Communist state that incorporated Russia and various Eastern European republics, including Uzbekistan, Georgia, Kazakhstan, Armenia, and Ukraine.

The Communist party, led by Lenin and then Joseph Stalin, replaced the autocracy with a much more restrictive state-controlled economy. While this centralization of the union's wealth made it an international economic powerhouse, the repression of the citizenry required to execute such a plan had calamitous effects both on Russian culture and agriculture. The elite fled the country, while peasants and farmers were forced to turn their land over to the state – they were murdered if they resisted. Famines ensued, along with perpetual shortages of basic supplies.

After World War II, during which time the USSR fought alongside the Allies, Stalin led the Union in a reconstruction effort that consolidated Com­mun­ist control of the Eastern Bloc, leading to increased tension with the West, rooted specifically in clashing ideologies of democracy and economic systems. Lasting from around 1947 to 1991, the Cold War severely limited the exchange of ideas and cultural practices between the United States and the USSR. The indelible images of Soviet bread lines served as Western politicians' proof that Communism was a failed experiment. Without any other information, Americans can extrapolate from there: How can you have a food culture when you have no food? 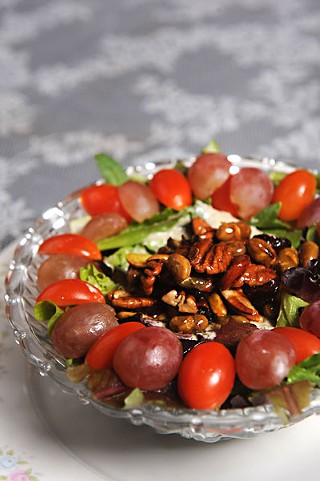 "The Cold War did keep Americans from going there and discovering Russian food; when they did go, it was during a time when there wasn't much happening in Russian cuisine," says Neuburger, who recommends Anya von Bremzen's 2013 memoir, Mastering the Art of Soviet Cook­ing, to those who are interested in learning more about Russian foodways. "Not that many Russians were getting out during that period, and the ones that did were Jewish and had their own particular cuisine, but that immigration was limited in terms of geographic reach. It's worth discovering for Americans."

In addition to taking advantage of the cultural education Russian House has to offer, Austinites interested in learning more about Russian food and culture can do so at Food for Thought: Culture and Cuisine in Russia and Eastern Europe, a symposium on the UT campus hosted by CREEES Feb. 7-8. More than three dozen scholars will present papers on Russia's cultural attitudes toward food, primarily through the lens of literature, film, comic books, and food blogs. The keynote speaker, Dr. Ronald LeBlanc, will discuss Russian food practices from Tolstoy's religious-inspired vegetarianism to the Soviet "hamburgers" (kotleti) popularized by Stalin's food supply official, Anastas Mikoyan. Other presentations will investigate celebrity chefs, post-Communist domestic practices, and viticulture.

Naturally, the festivities culminate in a dinner at Russian House, where attendees can party amid decorative matroyshkas of former Communist leaders and pose, clad in military coats and fur hats, with that giant bear on the threshold, knowing that the signifiers are mere props and that the real proof of culture is in the pelmeni.

The Food for Thought symposium takes place Friday-Saturday, Feb. 7-8; for more information, see www.blogs.utexas.edu/food4thought. The event is free and open to the public. 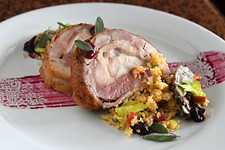