Restaurant Review: Go or No Go?

No Va is a promising addition to the Rainey Street District 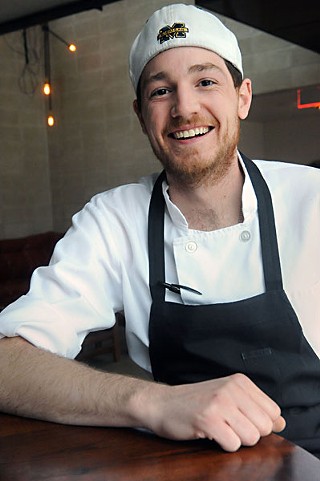 Is it just me, or does it seem to others like Austin is swarming with celebrity chefs these days? The latest is baby-faced Brad Sorenson, a former Asti chef and contestant on The Next Food Network Star and Chopped who used his media cred to open Downtown's No Va Kitchen & Bar. Sorenson and crew have repurposed a former residence within the trendy and still evolving Rainey Street district. Unlike the other Rainey Street conversions, this one is not a historical building but a modern dwelling built in 2003 by local architects KRDB. Joel Mozersky oversaw its conversion to dining space and the resulting restaurant-bar is an open temple of light made fun with multi-level seating and surprising nooks and hideaways. No Va's modern sensibility stands out among the quaint 19th century rehabbed buildings in the same neighborhood and hence the name, which means "it doesn't go" in Spanish. 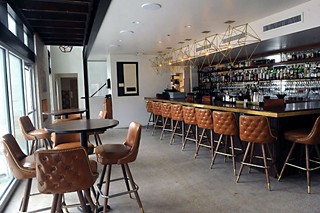 In terms of gastronomy, however, No Va could not be more Austin. Sorenson's three menus (bar, dinner, and brunch) are a calculated tip of the hat to the city's favorite comfort foods. Pizzas, macaroni and cheese, tacos, and pasta along with plenty of hearty slow-cooked meats take center stage. These are gussied up to go with the fashion-forward decor and a clever cocktail menu. The result is a stylish and approachable restaurant that in spite of its name, seems to fit Rainey Street like a pair of comfy Uggs.

I visited during happy hour with friends one night and had to physically restrain myself from monopolizing the mac and cheese ($5) with roasted jalapeño added on ($2). Pleasantly spicy and creamy, topped with crusty breadcrumbs, it was perhaps the best example of mac and cheese I've encountered in a long while. A chicken confit taco was just as tantalizing ($3). Citrusy shredded brussels sprouts gave it novelty, while the homemade tortilla whispered abuelita. I tossed it back with an Old Mick ($9 at happy hour, $11 otherwise), a delicious cocktail of whiskey, honey, and lemon capable of curing all but the most life-threatening colds. Fat hamburgers, thin-crust pizzas, and house-made potato chips round out the accessible bar menu.

The dinner menu, on the other hand, is more ambitious, and here is where young Sorenson and the rest of the No Va staff betray their relative inexperience. Caught up with being clever, the menu and execution can at times degenerate into a cacophony of global gastronomy and clumsy missteps. Mexican mole finds a place beside Italian risotto, or a kale salad with coconut dressing.

We tried a pear salad with goat cheese and pecans that was near perfect ($9). However, during the same meal, we were disappointed by a pile of paprika fennel bread ($5) that was almost tasteless for lack of salt. Thankfully it was served with a well-prepared white bean puree, very tasty olive butter, and something that our novice server suggestively described as a "special" oil, which turned out to be chile-infused olive oil. (Note to self: spicy "special" oil not to be used in erotic foreplay.) Another dish, the Shankenstein ($13), best characterized as a deep-fried shredded beef croquette, was so rich, I had to quit eating it after just two bites. An entrée of pan-roasted cobia over lemon potatoes and roasted cauliflower ($22) fared better in terms of taste, but my spouse and I both felt cheated at being served the very tail – the least desirable end of the fish. Minor blunders such as these are like artifacts of youth. A more experienced team would likely have polished the dinner performance to match the sleek styling at which No Va is aiming.

Still, I give No Va credit for its successes, which are many. The kitchen's fresh-fried blueberry doughnut holes are among the most irresistible desserts I've eaten in a long while. Like a present, these crisp nutmeg-y powdered sugar treats come tucked in a brown paper bag. Dipped in the sweet lavender milk that accompanies them, they are so delicious they make me want to purr. Likewise, No Va's Sunday brunch is a sunny wake-up of sweet potato hash ($13), lemon blueberry pancakes ($6), and fancy French toast ($6). I recommend their deconstructed "bacon," which is really just a fat chunk of caramelized pork belly ($5).

My final assessment: I like No Va. But, like the Rainey Street district it inhabits, No Va is still evolving. All the key elements are there, the potential is there, but it hasn't yet fully matured.