Bringing Home the Bacon, in a Kind of Time Machine 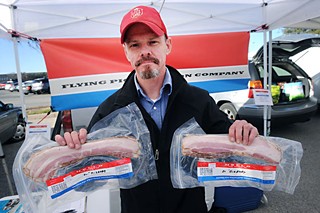 
The Book of Forgotten Arts. It sounds like a volume to be found in the library at Hogwarts. In reality, it is a book published by Yankee magazine that provides how-to instructions for projects such as digging a well, making an apple press, and building a smokehouse. Jerry Ater first saw the book as a 10-year-old child and was so fascinated that he kept it throughout his adulthood, periodically re-reading it, still fascinated by the storehouse of information it contained about "yesteryear's lifestyle."

"Then, at a certain point, I saw the PBS series Frontier House. It really hit me, how important this information was," recounts Ater. "People have been using these methods from time immemorial to survive, but today we have no idea how to do any of them."

Drawn to the idea of learning how to smoke meat, Ater built a smoker and started experimenting. A chef at Vino Vino encouraged him, telling Ater that if he could master smoked pancetta, they would buy it from him. "It took me, essentially, forever, to get it right," he says. "Months. But eventually, I did get it right. I use the recipe I developed to make my Italiano bacon, and Vino Vino has been my first and longest customer."

With financial backing from his employer, Craig Steede, Ater quit his job managing the Crown & Anchor Pub and started Flying Pig Provision Company in 2011. In a typical week, Ater cures 60 to 70 pork bellies. His commercial accounts also include Hopfields, Cenote, Snack Bar, and the Monument Market, many of them ordering an average of 140 pounds of artisan bacon a week.

Flying Pig makes three signature bacons: the Italiano; Ol' Hickory, cured with maple syrup and smoked with hickory; and Rise N' Shine, cured with ancho pepper and espresso. Ater mixes his own rubs from premium herbs and spices for every pork belly he cures and smokes. All of his pork bellies are made from pastured pigs raised by fifth-generation Amish farmers, and the rubs are applied daily by hand. The bacon that results is simply amazing: intensely flavorful, with a perfect balance of smoky, salty, and sweet. The balance of fat to lean is ideal, and it cooks up crisp and aromatic, changing size only slightly. Pigs raised as they were in the 19th century, their meat smoked and cured by the artisan methods in use before cheaper chemical shortcuts were developed – there is no other bacon in Austin like it.

Though bacon is the heart of the company, Flying Pig also makes thinly sliced, deli-style meats such as smoked turkey, Cajun turkey, ham, corned beef, and pastrami. Holiday hams are available by pre-ordering as well. Ever a stickler for perfection, Ater ensures all of his smoked meats are exceptional – less salty than commercial deli meats and far more flavorful.

This past summer Ater branched out from his commercial accounts and for the first time made his meats available to the general public at area farmers' markets. Currently, Flying Pig Provision Company sells at the Barton Creek Farmers Market on Saturdays, the Bluebonnet Market on Sundays, and at the Monument Market in Georgetown Thursdays through Sundays.