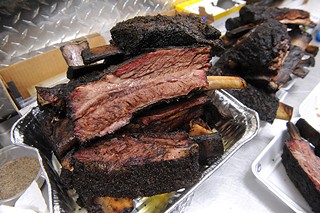 There's something primeval about eating a barbecued beef rib. Holding that big bone in your hand, nibbling off succulent meat and crackling crust that's been slowly caressed by coals and smoke for a long period of time – the experience transports 'cueheads back to their primitive roots. In the early days, selling the best cuts of beef was seldom a problem; a steak cut from around the frame of the ribs was in demand, while the ribs bordering that steak or roast were much less popular. The meat market was more likely to trim the meat from the ribs to stuff into sausage casings, or sell the ribs to folks as bones for the soup pot or a treat for the family dog. But eventually, with the growth of the barbecue joint as an independent restaurant, beef ribs began to find their way onto the smoker.

If brisket and pork ribs are the debutantes of the barbecue bill of fare, beef ribs are the ugly stepsister. Every barbecue shack has brisket, pork ribs of some kind, sausage, and either turkey or chicken, but it's not that common to find beef ribs on a menu board in Texas. Texas is known for its beef, and although smoked brisket has escaped the state's borders, beef ribs are very seldom seen in any other state's smokers, except in barbecue restaurants that emulate Texas barbecue. Within the state, the skinnier beef back rib has been served for decades, but the short rib rarely made an appearance on Central Texas barbecue menus except for a select few, such as Taylor's Louie Mueller BBQ in 1946 (they switched cuts in the Nineties) and Black's BBQ in Lockhart in 2007. As its popularity has grown, the far meatier short rib is what most folks these days think of when you mention beef ribs.

Back ribs (aka "Dinosaur Ribs," NAMP 124) have good beef flavor, with a much higher ratio of bone to meat. They are cut from the top section of the rib primal after the rib roast has been removed and contain some of the flavorful and fatty rib roast meat. Generally they run 7- to 12-inches in length, but can be as long as 18 inches. They usually come three to four ribs per rack, and "shiners" (a trim so close that the bone shows through) occur more frequently with back ribs. They are the least expensive cut of beef ribs, and while the meat is tender, there is less of it per bone.

The chuck short rib (NAMP 130) comes from ribs one through five, from just above the brisket and under the chuck/shoulder. They tend to be a little smaller and denser with less fatty collagen and less surface fat, and are slightly less uniform than the plate short rib. Their price falls in the middle, halfway between the 124 and the 123A.

Short ribs (aka "Plate Short Ribs," NAMP 123/123A) consist of the rib section from any rib and/or plate in the rib cage and contain at least two but no more than five ribs, usually ribs six, seven, and eight. These tend to be the highest priced (three to four times the cost of the back rib) and the most consistent in quality and taste, but have a higher fat content (and therefore, a little more goes to waste). Aaron Franklin and Wayne Mueller both serve the plate short rib.

It's hard for a pitmaster to make money on a beef rib. Depending on the supplier and the cut, they can expect to lose 20% to 30% of the raw weight during the cooking process; use a higher grade of meat with more marbling and the loss can escalate to 50%. Specify "Prime," "High Choice," or "Choice" over "Select" grade, or demand Angus or all-natural, and the wholesale costs can skyrocket.

Demand for short ribs has shot up; braised short ribs are showing up on more fine dining and comfort food menus around the country, plus more and more beef ribs are being processed for kalbi (Korean barbecued beef ribs). Couple this with lower numbers of market cattle available due to the drought, and you have a seller's market. Weight variability per rib can be a problem, especially if the restaurant charges by the unit and not by the pound. So long as the pit boss has beef ribs on his or her smoker, some other more profitable cut of meat is not being cooked. Also, it's hard for a restaurant to charge a high price for a menu item that has so much bone weight involved. Most pit bosses say that they only serve them because of customer demand, and that, at best, they break even. Still, with all that working against their economics, barbecue restaurants continue to meet their customers' demands by offering beef ribs. Some have them on the menu all the time, while an increasing number of restaurants prefer to offer them only on certain days, or as a special item. For example, Franklin Barbecue only offers them on Saturdays, for the first part of the waiting line.

After eating some ethereal beef ribs in local barbecue restaurants lately, it occurred to us that the Chronicle had never held a comparative tasting of barbecued beef ribs, and thus was born the first-ever Austin Chronicle Invi­tational BBQ Beef Rib Smack­down. On Sunday, Jan. 5, we secured the Palm Door event space and hooked up with Shane Bordeau of Twisted X Brewing Co., who provided the excellent Twisted X Tex-Mex Craft Lager and a lip-smacking fire-roasted salsa (made with ghost pepper and Twisted X Lager). Melody Plate from Treaty Oak Distilling whipped up a fantastic blackberry sour craft punch with Treaty Oak's Red Handed Bourbon that wowed the crowd. Caterer David "Q" Quintanilla made batches of his legendary queso and guacamole, and handled the rib-slicing duties in the kitchen, while Suzann Dvorken helped Q and kept the secret list of entrants away from the judges.

It was a private affair, which allowed camaraderie between the pit bosses, many of whom had never met before. They compared notes on methodology, meat sources, pricing, and the like. They also got to eat each other's ribs and brag a little. We judges were ensconced in a separate room; Q and Suzann would bring in the competing ribs in pairs, in numbered clamshell containers to ensure anonymity. Several ribs of each entrant were kept whole, for judging appearance (10 points), while several were cut up into bite-sized portions, which allowed us to select different parts of each rib for judging texture (20 points) and taste (30 points). Anyone can braise a beef rib to unctuous perfection, but it takes a master of the barbecue arts to take a big chunk of rib that's surrounded with tough connective tissue and interlaced with gelatinous collagen and magically transform it with spice, slow and low heat, and hardwood smoke into a tender morsel of culinary beauty. Most of these cooks season them heavily with kosher salt and coarse pepper (and the occasional cayenne, garlic, and/or paprika), let them sit a bit to absorb those seasonings, and then load them over an indirect post oak fire humming along at 300-375°F, to gently render the fat, break down the collagen, and absorb the smoky flavor for eight hours or so.

Here are the questions we judges considered about what makes a great beef rib: Is it appealing, with a crusty, caramelized bark and a penetrating smoke ring? Is moistness evident, and are the fat and collagen rendered and melted? Are there visible "sugar cookies" (sweet, crunchy globules of caramelized fat and spice)? Is it tender, with the right balance of fat to lean? Does it have the ideal "watermelon bite" or pull from the bone? Does the rib have a seductive aroma of hardwood smoke and caramelized sugars and spice with no bitterness? How prominent is the smoke, and does it complement the flavor? Does the beef flavor come through or is it subdued? Is the seasoning balanced and complementary? Is the beef rib a complete whole, with all taste elements contributing to the overall flavor?

These requisites add up to a tall order. We judges were surprised at how close all of the ribs finished to each other, but there were three that stood above the rest. The clear winners were the ribs from Tom Mickle­thwait of Micklethwait Craft Meats. Second place was captured by John Lewis of La Barbecue, who just edged out third place finisher Lance Kirkpatrick of Stiles Switch BBQ & Brew. The pit bosses all cooked up some amazingly delicious beef ribs, and we were blown away by the quality of the competition. The tweeting and smack talk started up immediately, and everyone's looking forward to next year.

We invited all of the area pits that cook beef ribs, either full-time, or as a regular menu special. Several wanted to come but had previous commitments (Louie Mueller Barbecue, Franklin Barbecue), a couple had to cancel at the last minute, and a few other well-known beef rib pits never bothered to respond to the invite. 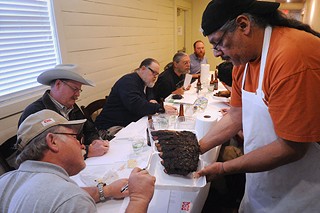 We invited skilled judges with a wide range of barbecue experience, all highly qualified at tasting and judging beef ribs.

Chef Jesse Griffiths has a nationally praised local butcher shop and supper club. He was nominated as the People's Best New Chef in 2011 by Food & Wine and is the owner/chef of Dai Due with his partner, Tamara Mayfield. He knows meat and barbecue from the carcass up.

Shayne Lockhart is in his 25th year on the BBQ Committee for the Star of Texas Fair and Rodeo BBQ Cook-Off. He's eaten a lot more barbecue through the years than the average Texan, and is an accomplished competitive judge of quality 'cue.

Charlie Shirley is the vice president of the Central Texas Barbecue Association. He not only serves as a judge at competitions across the state and region, but has cooked barbecue competitively for many years (and frequently wins).

Gerald McLeod has traveled across Texas sampling barbecue as the author of The Austin Chronicle's "Day Trips" column since 1991. He edited the Chronicle's first two "Guides to Central Texas Barbecue" and has frequently served as a judge at barbecue cook-offs.

In August 2008, Todd Plunk and Drew Thornley launched Man Up Texas BBQ, the leading blog about all things Texas barbecue. Todd has ridden shotgun with Drew on barbecue-reviewing excursions all across Texas and knows a good rib when he eats one.

Cookbook author, chef, and restaurant consultant Mick Vann has been a contributing food writer for the Chronicle for the last 17 years. He writes about barbecue, reviews barbecue joints, cooks barbecue, and leads tours along the Central Texas barbecue belt.

Nick Barbaro is the publisher of The Austin Chronicle, co-director of SXSW, a rabid soccer fan, and an even bigger fan of Texas barbecue. He has eaten barbecue professionally for decades, and especially enjoys a well-smoked, tender beef rib.