Westernized sushi and a hapless waitstaff define the Tadashi experience 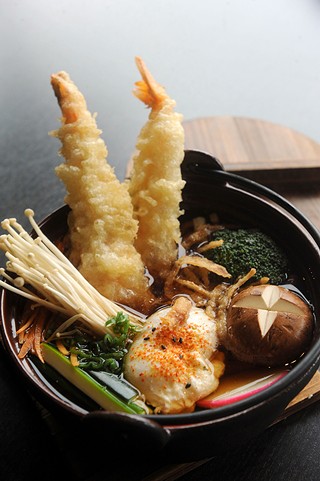 Austin's latest suburban sushi restaurant features a cool, modern interior, a gleaming sushi display case, and a menu loaded with big rolls aimed at the U.S. palate. Tadashi also attempts to appeal to the fans of true Japanese dishes like sashimi and nigirizushi.

We visited Tadashi twice, once for lunch and once for dinner. When we arrived for lunch at about 1:15pm, there were five occupied tables and two waiters. Despite a very light workload, our man was flustered, poorly trained, and had serious problems with both his knowledge of the menu and his ability to make their computerized system work. We bought a very simple lunch. To try the nigiri, we ordered uni ($12) and tobiko ($5.50) with quail eggs ($1 each). We also ordered bento boxes. My wife had a shrimp tempura bento box ($11 lunch/$18 dinner), and I ordered a salmon teriyaki bento box ($12 lunch/$18 dinner). Then we sat. And sat. The bento boxes finally appeared, and they contained some tasty items. The miso soup was delicious and a wonderful warm-up for a frigid day. The tempura is the best thing on the menu, perfectly crisp and bursting with flavor. It was hard to tell if the gyoza was bought frozen from a supplier or made fresh, but the fact that we couldn't tell is a problem in itself.

However, the real disappointment was the maki, which was ice cold. A properly trained sushi chef usually spends 40% of their training and apprenticeship learning how to make rice properly. To have it served at the wrong temperature is an insult to whoever made it and demonstrates little respect for the ingredients, a cardinal sin in a Japanese restaurant. Also, despite the fact that we requested our nigiri before the bento boxes, we got them afterward. It seems there was a miscommunication between the waiter, the computer, and the sushi chefs, which meant they didn't know we had ordered it and the waiter wasn't paying enough attention to notice. Once we got the uni, it looked OK, but when I tasted it, I picked up a whiff of ammonia aroma and didn't chance the second piece. The flying fish roe, however, was crispy and clean-tasting, and the quail egg yolk stood tall and tasty.

We went back for dinner with a group of six, and the place was hopping. Our waiter appeared before we had even seen our menus. He happily told us how he would take care of us then left us to check out the menu. We had our drink orders ready for him right away, but it took him 15 minutes to return. We ordered three large servings of shrimp tempura ($16) and vegetable tempura ($13), yakitori ($3), and several types of nigiri. One of us wanted a large roll, but most of their rolls are aimed at the U.S. palate, with ingredients like deep-fried fish or vegetables along with fats like avocado, mayonnaise, or cream cheese, all topped with intensely flavored sweet sauces. The problem with all these add-ons is that the flavor of the fish gets buried under the embellishments.

We asked for a roll suggestion and our server recommended the Superdragon ($19). Could it be a coincidence that he proposed the most expensive roll they make? In any case, we ordered two Superdragons to be shared by all. The Superdragon is a huge concoction with fake crab mix, avocado, cucumber, oshinko (pickled radish), topped with half of an eel, then topped with tobiko, and finally drizzled with sweet unagi sauce. It is an enormous work of art covering a platter. They probably sell hundreds of them. I couldn't taste the eel, but with all those ingredients, I'm not sure that is the point. On the other hand, it is a magnificent-looking dish.

As on our first visit, we asked for items in a certain order, but, as before, it was hopeless. Our waiter disappeared for long stretches, and they had another person delivering the food. He had no idea who got what, and since there were multiple orders of some things, none of which arrived at the same time, we had to decide who got fed first and who waited. One tempura order was missing a shrimp. We asked for it and about 20 minutes later, our runner appeared holding a single shrimp wrapped in a napkin and asked who wanted it.

Tadashi has a serious training problem, and their ordering system doesn't work. Right now, I can't recommend the food at Tadashi to anyone other than fans of tempura and people who love the concept of the Superdragon. Traditionalists won't find much to make them happy. And as for the service problems, they are bad enough for me to cross Tadashi off my list until I hear of some major turnarounds. 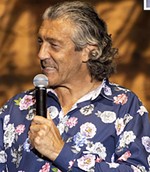