The sleek and gleaming Schmidt Family Barbecue is perched on the northwest corner of FM 2244 (Bee Caves Rd.) and Highway 71 West, at the edge of the Hill Country Galleria shopping center. Made of polished wood and metal, it looks too slick to be a barbecue joint, especially one with such heritage behind it. On the right side of the entry there is a separate door to pick up to-go and call-in orders. When you enter, you realize how big the space is; there's an industrial feel to the design. Inside you'll smell plenty of smoke from the offset brick pits they cut your order from, so you can relax the hackles a little. Out back sits the pile of seasoned post oak and the two big Bewley offset pits that cook the bulk of the barbecue before it gets moved inside for slicing.

The Schmidt family mentioned in the restaurant's name is the family behind both Kreuz (pronounced "Krites") Market and Smitty's Market down the road in Lockhart. Susie Schmidt-Franks, with her husband, Chad Franks, is among the third generation of Schmidts in the business. It started with her granddad Edgar "Smitty" Schmidt, who started working at Kreuz Market in 1936 and bought it from the Kreuz family in 1948. Her grandfather's kids, Don, Rick, and Nina, built up the empire, and her cousin Keith Schmidt is the current proprietor of Kreuz Market, and also a partner in Schmidt Family. The famous bad-blood episode is long gone, and the family followed the tradition of using coals from the pits of both Kreuz and Smitty's to inaugurate the smokers at Schmidt Family.

The key word for the meats at Schmidt Family is moist, followed by the word tender. Expect no glazes, just smoke and spice. Since they cook a little hotter and faster than the typical CenTex barbecue joint (sort of a cross between traditional slow-and-low smoking and smoke-grilling), you get a little less smoke taste, while it accentuates the beef and pork flavors that can get smothered by the clouds of oak. But the bark gets nice and caramelized and the smokiness is definitely part of the taste profile. Starting with the "fatty" brisket from the point ($8, ½ lb), we found it tender and loaded with melting collagen, with a rim of salted, peppery crust and a moderate smoke ring. Just a slight tug separates the rendered sections of meat. The burnt ends of the brisket (they don't have them all the time) are even more caramelized and just as tender, with glistening sugar cookies of fat. 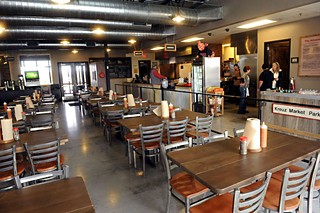 Pork spareribs ($7, ½ lb) have up-front pork flavor – very tender with a crusty, smoky bark. Purists might judge them a little too done, since the meat slipped off of the bone, but the meat was exceedingly moist and not the least bit mealy or stringy. Pulled pork ($6.50, ½ lb) is very unctuous, not needing a sauce – a good thing, since we found their mustard-based version too sweet and one-dimensional; it could have used more of everything, especially vinegar and spice. We solved the problem by adding some of the vinegar-pepper sauce.

The turkey breast ($7, ½ lb) looks like it has been brined, but not excessively. You don't get that background hammy flavor that so often comes with brined poultry. It has a crisp, aromatic skin and melting flesh. The sliced pork loin ($7, ½ lb) was delicious, with a nice smoky bark along the edge; a gentle squeeze, and the fatty juices leak out of the rosy pink meat. The half-pound sausage links (original, $4.50; jalapeño-cheese, $4.75) are from Kreuz's. Both are coarse-textured and succulent, with great snap and smokiness. We preferred the original, loving the beefy flavor accented with pepper, garlic, and cayenne. The jalapeño-cheese link tasted mostly of the chiles and less of the cheese; not a bad thing, just not as good as the original. Specials run throughout the week, with half-inch thick slices of prime rib and ham served Friday-Sunday, lean sliced shoulder clod served on Saturday and Sunday, and massive beef ribs available Wednesday and Friday. As at the original joints, meals are served on brown butcher paper, with access to pickles, onions, and white bread; the sauce sits on the table.

The sides ($1.99 single serving, $5.99 pint, $9.99 quart) were relatively lackluster, but they usually are. We tried the mac and cheese with ham and jalapeños and found it too creamy and not cheesy enough; it lacked punch and big taste. The sweet-and-sour slaw was too sweet, too cabbage-y, and needed salt. The potato salad was mustardy and, again, too sweet; though the spuds were perfectly cooked, it just needed some oomph. The beans were the best of the lot, but they too were a little too subtly spiced.

There is a nice selection of Maine Root fountain drinks, beers, and wines, and the service is prompt and very friendly. This third generation of Schmidts has succeeded in bringing a genuine taste of old Lockhart barbecue to Bee Cave. With a little more polish and a little more smoke on the rafters, Schmidt Family Barbecue will fit like a nice, tight glove. I'll definitely go back for more.