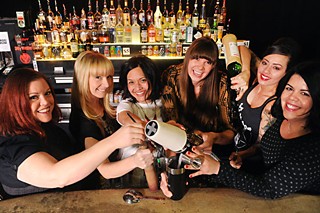 Close your eyes, cop a look behind the craft cocktail bar within your corneas, and tell me what you see. Is that a woman holding your highball glass and lemon swizzle? No, great optimist. That's wildly too progressive. If your imagination lies anywhere as limited as that of our society's collective pop consciousness, the bartender you dreamed up probably looks like a serviceable, suspendered man plucked straight from the Twenties.

But that perception is starting to change throughout the country, thanks in part to a competition called Speed Rack, which invades Austin Wednesday evening to restock the shelves inside that Downtown punk rock haunt Red 7.

At its root, Speed Rack is a fundraiser – a tournament-style competition pitting some of the region's most badass female bartenders against one another in an effort to raise money to fight breast cancer, with money going toward such foundations as SHARE Cancer Support, the National Breast Cancer Foundation, the Dr. Susan Love Research Foundation, and the Helen David Bartender Relief Fund. The competition came about in August of 2011 after New York City bartenders Ivy Mix and Lynnette Marrero, founder of the New York chapter of Ladies United for the Preservation of Endangered Cocktails (she's also the owner of a cocktail catering company, Drinks at 6), decided that the craft cocktail scene needed a shakeup.

"Originally, it was tongue-in-cheek," says Mix, who worked at Fort Defiance in New York before moving to Lani Kai and then the Clover Club in Brooklyn. "I looked around and noticed, in many of the bars in New York, that I wasn't seeing any women. There would just be a whole bunch of dudes. The whole style back then was about pre-Prohibition cocktails. Everybody was wearing suspenders and mustaches."

The two pieced together what Marrero calls "a March Madness of boobies and booze" designed to simulate a bar's busiest night, with judges – including Jason Kosmas of Employees Only, Chris Bostick of incoming Rainey Street club Half Step, mixologist Dale DeGroff, and Houston bar owner/former Speed Rack Texas champ Alba Huerta – demanding complex drinks be made within short time periods and docking points for slip-ups or wasted seconds. "Like your worst Saturday night when you're working at the service bar and four people walk in who you respect," explains Marrero. "You have to remember all these classics they're asking about, but you also have to make all these other drinks that people are asking for as well."

It's a test of both speed and accuracy, and it seems to be catching on. Marrero and Mix have hosted 24 competitions since that first run-through in 2011, with each event drawing talent from miles and miles away. Wednesday's competition will welcome three bartenders from New Orleans, another from Denver, and one from all the way over in Mel­bourne, Australia. That's not to mention the wealth of talent emanating out of Texas, home to 16 contestants, with nine coming from Austin in particular.

"A couple years ago, you'd have been hard-pressed to name five awesome female craft bartenders. Now you would be hard-pressed to limit your answer to five," says Jessica Sanders, a co-owner at Drink.Well who's set to compete in her second Speed Rack. "What you're seeing a lot more in the last year is this breakdown of the divide between a craft bartender and what people perceive as a speed bartender. That's why Speed Rack is so awesome. It allows us to bridge that gap so easily. Whitney [Hobbs, a runner-up last year who now tends bar at Whisler's] or Alexis Piotrowski, who's the bar manager at Jackalope: These gals work at very high-volume, very fast-paced bars, but you're starting to see them apply that speed towards really serious cocktails. That's been really exciting."

So, too, has been the ascent of both Sanders, currently on the board of the Central Texas chapter of the United States Bartenders' Guild, and her employee Carley Duna­vant, who's juggled time between Drink.Well, Qui, Whisler's, and Odd Duck over the past two years and also spent the summer capturing a Top 10 finish at Bombay Sapphire's Most Imagin­at­ive Bartender competition.

"It adds a lot of legitimacy to a career," says Sanders. "For women, that can sometimes be tricky. Several of us talk a lot about how our parents haven't quite bought into the idea of some of us pursuing bar work as a career. Every competition that you win adds some legitimacy to what you're doing. You can show people: 'Yes, this is a real skill that I have, and this is a real talent that I'm building within myself.'"

Matter of fact, there's a good chance one of these bartenders will be slinging your drinks this weekend.