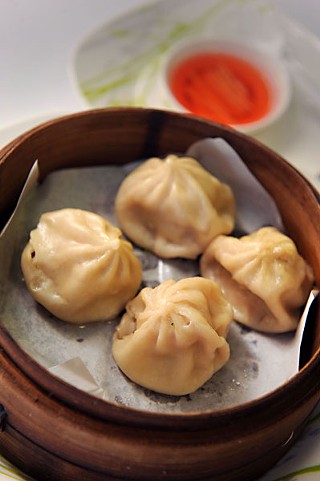 Austin's high-end culinary scene has enjoyed much hype and attention in the past couple of years. But there are many dishes worth trying in neighborhood restaurants and family-owned establishments that do not feature a celebrity chef or boast articles in national magazines. Give these a try. In no particular order:

2) Ivy's Deli Your drive to IKEA in Round Rock should never be complete without a stop at this friendly Chinese mom-and-pop cafe for some of the best dim sum and dumplings around.

3) Las Palomas The first Mexican food I tried in Austin, and one that continues to remind me of Mexico City home cooking. It's often overlooked but still going strong after 30 years, for good reason. The simplest thing, their chicken consommé, almost brings tears to my eyes.

4) Taco More Another traditional Mexican gem, now with two outposts by popular demand. Here you'll dine with a majority of Mexican nationals and their families in a no-frills environment, just this side of hole-in-the-wall, but so worthwhile. Three words: consomé de cabrito.

5) Asiana Despite the lack of notable decor or atmosphere, this South Austin strip-mall joint may very well be serving the best Indian food in Austin. Cuisine from the entire subcontinent, expertly executed, and lovingly served. We love the lamb rogan josh.

6) Banger's Sausage House & Beer Garden When it comes to the most laid-back place on Rainey, Banger's is my choice. The atmosphere exudes camaraderie rather than hipsterness, and you can bring your dog, too. Although everything I've had is tasty, I can't get enough of the dak bulgogi.

7) Phonatic This family owned mini-chain of fast-casual Vietnamese is quickly making its way into my tried and true places for a quick lunch with co-workers or fast, delicious takeout for dinner. Can I get enough of their báhn mì steamed buns? I think not.

8) Mi Tradición So, Chuy Guevara had to change the name of his down-home bakery because another local establishment happens to own his name. But the food and pastries have not changed at all, the menu boasts new items, and it's perhaps the only place where you can get a cemita poblana with the works.

9) El Mesón Why this South Lamar standby is not always packed baffles me. Marisela Godinez combines family recipes with creative touches in a varied menu that is the real Interior Mexican deal. Try the ancho chile relleno and the spicy margarita for something completely different.

10) The Abgb and Stanley's Pizza (tie) Fresh craft brews and spectacular thin-crust pizza are the stars at these relaxed hangouts. For a weekend getaway, Stanley's and adjacent Jester King Brewery are just 18 miles southwest of Downtown, while ABGB, tucked away on Oltorf, is the newest addition to the growing South Lamar restaurant area.