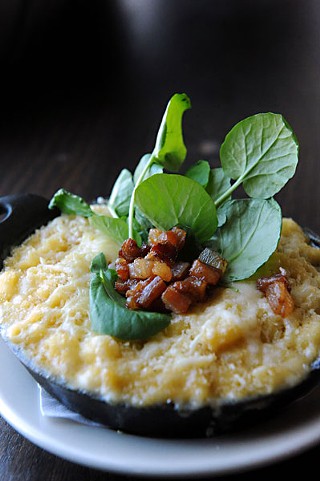 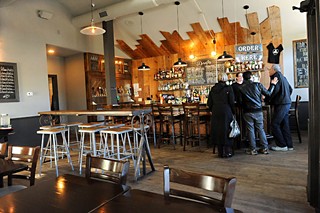 A bright yellow schoolhouse with a flashing traffic light and a bell tower: It's difficult to miss this recent addition to Manor Road's restaurant row. Opened in August by experienced restaurateurs Edgar and Christina Torres, School House Pub offers 20 Texas beers on tap, custom cocktails, and a selection of burgers, sandwiches, and plates for sharing. Former owners of the now-shuttered Zandunga, the husband-and-wife duo are no doubt hoping to match the success of neighborhood mainstay Mi Madre's, the Torres family's restaurant next door.

Though the cozy atmosphere's decor could easily be overdone or gimmicky, School House effectively walks the line between kitschy and nostalgic. The renovated house features beautiful and rustic woodwork; playing to the schoolhouse theme, the menus are printed on index cards while draft beers are listed in handwriting on a giant chalkboard behind the service counter. An additional detention-style chalkboard reads a repeated "I will not make out under the bleachers." It's charming, and it works.

However, while School House Pub has quickly become a popular hangout, a place for congregating after work or for a casual dinner date, the food doesn't make the grade. There was no need to line up for so-called "recess" at the pub as a weekday happy hour saw friendly and prompt service. Though the draft list is heavy on the dark malts and could use a better offering of IPAs, ales, and lagers, the options in bottles, cans, and bombers even out the selection. My companion and I quickly ordered two drinks and two plates to share as an appetizer. Unfortunately, my friend was given a mystery stout instead of the Ranger Creek Saison he ordered. No worries, the beer lover drank it anyway. I ordered a Hall Pass: St. George gin and muddled blackberry topped with sparkling peach soda. It was excellent, not overly sweet and just stout enough. While the ingredients are likely better suited for a warm summer evening, it worked equally well in December in Austin.

Lured by the fire pit, we headed outside to a picnic table armed with our table number index card perched atop a ruler positioned inside a chalkboard eraser. We started out with the Montreal Fries ($6), the School House version of Canadian poutine. Described as fries tossed with braised short ribs, gravy, and cheese curds, what arrived at our table was a monstrous heap of fries so laden with garlic that we heard a woman at the next table exclaim, "Oh my God, that's a lot of garlic!" There were a couple of sporadic cheese curds, an utter lack of gravy, and then there was meat. I have a difficult time believing those were short ribs. Whatever it was tasted like less-than-fresh stewed brisket haphazardly strewn on top of fries. Hoping for a better result, we moved along to the Red Chile Wings ($7). Based on the menu description, we expected spicy guajillo chile hot wings topped with Cotija cheese and a Mexican crema. However, I'm still bewildered as to what we were actually served. How a dish with these ingredients could be prepared with an end result lacking in any discernible flavor is beyond my comprehension. Whereas a cool crema would have been a welcome addition to balance out the expected fire, in this instance it just added to the overall blandness, and the Cotija was also noticeably absent. The School House Pub Burger ($6.50) – comprised of made-in-house ground beef, aged cheddar, local greens, and jalapeño-onion marmalade – did not fare any better. The ground beef was overly peppered and did not pair well with the challah bun. Insult to injury, instead of jalapeño-onion marmalade, we got a pile of stewed onions.

Though the School House is certainly a bustling hot spot, with the competition on Manor's restaurant row continually heating up, the cafeteria needs some serious tutoring. Based on our grading scale, we give it an A for ambience, beer, and cocktails, a B- for service, and a failing grade for the food. Class dismissed.