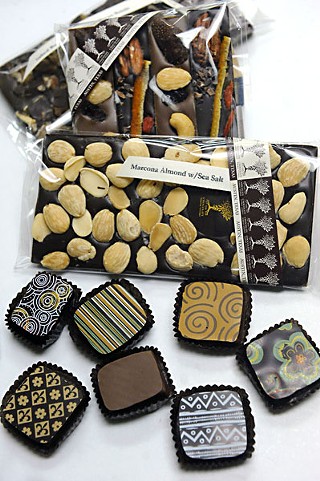 Samples from the Chocolate Makers Studio

The international renaissance in artisan chocolates has been slow to take hold in Austin over the past decade. Certainly, we've been able to purchase fine chocolates made in other parts of the state (Dude, Sweet Chocolate from Dallas; Wiseman House from Hico) and country, and there are a few confectioners, but the ongoing production of true artisan chocolates with any staying power in the market has been relatively sparse. Tom Pedersen's Kakawa Cocoa Beans – roasted cacao beans covered in white, milk, and dark chocolate and then dusted in cocoa powder – are one of the only really distinctive Austin chocolate items that comes to mind. However, we've recently met two local chocolatiers who just might help put Austin on the artisan chocolate map.

Twenty-nine-year-old chocolatier Krystal Craig says her fascination with chocolate started early and was encouraged by her parents. "My dad would get me to make desserts for our Sunday dinners, and chocolate was usually my first choice. Mom was always bringing me different kinds of chocolates to try. I was hooked," she recalls fondly. Though Craig is mostly self-taught when it comes to chocolate work, her résumé is pretty impressive for someone not yet 30 years old: She and a friend created an organic, vegan chocolate business called Arte y Chocolate, which they ran for seven years; she consulted on the opening of the Viva Chocolato store in the Domain; and she developed and produced the luxurious sipping chocolates for a company called Sip that tried to break into the Austin market last year. These days, in addition to producing her own signature line of truffles, barks, and molded chocolates in a rented commercial kitchen in South Austin, Craig also drops by Jeffrey's every week to whip up the special truffles that accompany guest checks at the end of meals there. Visitors to the Four Seasons Austin get Crave chocolates on their pillows nightly, and her company was chosen to create chocolate bars for all the Coffee Bean & Tea Leaf stores in Texas.

With a focus on organic ingredients and artistic expression, the homegrown businesswoman wants Crave Artisan Chocolate (www.craveartisanchocolate.com) to reflect a definite Austintatious influence, and Craig reaches out to other local artists to make that happen. She puts together beer-and-chocolate pairing events with the Ginger Man pub a couple of times a year. The distinctive chocolate bats in her "Austin Chocolate" collection are based on Dale Whistler's Nightwing sculpture, and local graphic designer Justin Beal has contributed to the definition of her brand with the designs for labels and the edible cocoa butter transfer artwork that adorns her different chocolate barks. The Austin Chocolate collection is sure to be a big hit on the holiday gift market, what with choices like bats, boots, a chocolate-covered s'mores bar sporting a big Texas star, a salted-toffee bark with a "bike lane" design, and a cinnamon-pecan bark festooned with guitars. It just doesn't get much more Austin than that.

Earlier this fall, I had the opportunity to meet Craig and try some of her chocolates at a PR Over Coffee event at the shared-use Capital Kitchens facility where she does her work. I was impressed by her eye-catching packaging and choices of flavorings that were interesting and creative without being too far out of my personal taste comfort zone. The salted-toffee bark and salted-caramel truffles were my favorites, but her use of crunchy cacao nibs appealed to me, as well. Craig's immediate plans call for continuing to build her roster of wholesale clients and stockpiling plenty of chocolates for her sales booths at both the Blue Genie Art Bazaar (Nov. 29-Dec. 24) and the Armadillo Christmas Bazaar (Dec. 17-24) this holiday season. Craig's best-of-all-possible-worlds, five-year plan includes a dream where she and her husband, Jeffrey's sous chef Ian Thurwachter, have a restaurant of their own with space to showcase her chocolate creations. If his cooking is anywhere nearly as accomplished as her chocolate work, I look forward to being their customer.

"Chocolate is the master." It's the very Zen-like statement of a man who has spent most of his adult life in service to one of the more revered and fickle substances known to man. Steven Lawrence is a Colorado native who began his career as a pastry chef at the Fairmont Hotel in Denver and soon discovered his affinity for chocolate work. He soon surrendered to chocolate as his master, pursuing knowledge and developing skills during a long stint at the famed Fran's Chocolates in Seattle, where he was the only man on the staff for several years. Lawrence also worked pastry chef jobs in New York, Portland, and Louisiana before his wife's career as a college professor brought them to Austin a few years back. Austin's vibrant local food scene seemed the perfect place to found the Chocolate Makers Studio (www.chocolatemakersstudio.com) in a rented commercial kitchen space. Thus Lawrence began developing the chocolate product line that represents the culmination of all his years of work and study.

I found out about Lawrence's first-ever pop-up chocolate shop at Antonelli's Cheese House via an email blast from John Antonelli. The Antonellis are known for showcasing quality artisan food products, so I felt reasonably certain the Chocolate Makers Studio would be a company worth checking out; my subsequent interview with Lawrence bore that out. The man who says "chocolate is the master" is someone who has learned over time that the patience and persistence necessary to work with chocolate can yield remarkable results. Although Lawrence's progress in developing the company has been slow and painstaking, his chocolate creations are elegant. Over the years, he's discovered how to use a variety of non-food-service equipment to perfect his work. For instance, large veterinary syringes are just the right size for efficient truffle-filling, and a vibrating panel used in the creation of dental implants gently pushes any air bubbles to the surface of truffle fillings and chocolate bars.

Lawrence's passionate pursuit of chocolate knowledge has inspired him to study cacao in Ecuador with the long-range goal of creating single origin, Fair Trade, bean-to-bar chocolates from different chocolate-producing regions. At some point, he'd like to have his own shop, but currently his chocolates are available at such local retailers as Antonelli's Cheese Shop, Prima Dora, Royal Blue Grocery, Coterie Market, Hyde Park Market, Breed & Co., Austin Wine Merchant, King Liquor, and Atown. The Chocolate Makers Studio line includes 14 different chocolate bars, an assortment of truffles and caramels, three delectable mixes for drinking chocolates, and three dessert sauces. More than 200 people showed up over the course of several hours on Sunday afternoon to sample Steven's creations. People willingly sipped hot chocolate on an 88 degree-day, there were moans of pleasure and eyes rolled back. Sales and orders for pre-Thanksgiving and pre-Christmas pick-up were brisk. It is still possible to order chocolates by Dec. 17 for pick-up at Antonelli's on Dec. 20.