A Conversation With Chef Sonya Coté

"For years I have wanted to have an outdoor restaurant, on a farm," says Eden East chef and owner Sonya Coté. "I had done a series of dinners here at Springdale Farm, so I knew it was exactly what I wanted."

Going into the winter months, the obvious question is, will Eden East be able to stay open? Surprisingly, weather has only forced closure two or three nights. "Obviously, that night it rained 12 inches? We did not open," says Coté. She is considering throwing up a temporary greenhouse, or perhaps a tent for January and February. "I kind of hate to do it, because being outside, under the stars, that is part of the experience," she laments. "But this is our first winter, and we really don't know what to expect. It would be good to have a backup plan."

What is inspiring Coté these days? By birth an Easterner, Coté has recently been seduced by Southern foodways. "I have been devouring books on Cajun and Creole cuisine, and delving into recipes from the Carolinas. Right now I am really intrigued by North Carolina. ... I think the next few menus will reflect that region's cuisine, definitely." 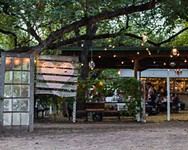