Another day, another barbecue dynasty fracas

The pop-up chocolate shop at Antonelli's Cheese Shop (4220 Duval St.) featuring chocolatier Steven Lawrence of the Chocolate Makers Studio was a hit, with guests moaning with pleasure as they sipped tiny cups of decadent hot chocolate and nibbled samples of designer truffles and custom chocolate bars. It's still possible to order chocolates to be picked up at Antonelli's on Nov. 24 and Dec. 20.

A recap of Saturday's Faraday's annual Holiday Baking Contest with names of the winners, photos, and a winning recipe appears online this week at austinchronicle.com/food. Pastry chef Janina O'Leary was a member of the judging panel, and she divulged she's the executive pastry chef for the upcoming LaV restaurant (1501 E. Seventh), which opens in early 2014. She's currently developing a program that will include rustic breads, pastries, and plated desserts for the restaurant. 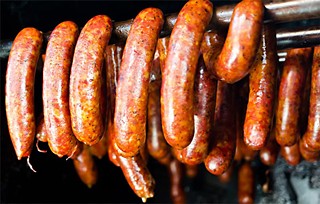 There's plenty of local barbecue news. Sales have been so brisk at the new Schmidt Family Barbecue location in Bee Cave (12532 FM 2244) that co-owner Susie Schmidt Franks reports they are already having another pit built for the restaurant... The lot that is home to La Barbecue (1502 S. First) has been sold, so they'll be moving to a space at East Sixth and Waller behind the old Uptown Sports Bar after the close of business on Dec. 1, and reopening in the new spot on Dec. 4. They really need a good brick-and-mortar spot in which to expand their pit capacity... Another multigeneration contingent of a venerable Lockhart barbecue family announced their intention to take on the Austin market last week when brothers Mark and Michael Black (great-grandsons of Edgar Black Sr.) hung a banner on the old Holiday House (1003 Barton Springs Rd.) proclaiming "Black's Barbecue – A Lockhart Family Tradition – Coming Soon." However, Eric Lenderman, operations manager of the original Black's Barbecue (215 N. Main in Lockhart), tells us the new Austin outlet is not affiliated with the Lockhart original, and there will be some legal wrangling about the use of the family name. Looks like we're in store for another surefire Central Texas barbecue family melodrama, folks. We'll keep you posted.

The annual Good Food Awards nominees have been announced, and Austin is well-represented once again. Kudos to nominees Jester King Brewery, Independence Brewing Co., Pâté Letelier, Pure Luck Farm & Dairy, Trace at the W, the Jelly Queens, and Confituras. Best of luck to them all! Winners of the Good Food Awards will be announced at a gala in San Francisco in January.