Torchy's and the case of the purloined Taco Bible 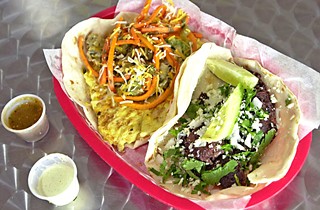 Usually when we hear about restaurant business lawsuits, they revolve around disputes over names and trademarks, but the lawsuit the Torchy's Tacos folks have filed in Houston is somewhat different. Most everyone in Austin is familiar with Torchy's Tacos; chef Michael Rypka's homegrown business started with one food truck in 2006 and has now grown to 20 brick-and-mortar outlets in Austin, Fort Worth, Dallas, and Houston, with more on the way next year. Torchy's Tacos has achieved real popularity in every one of the Texas metro markets. So much so, it appears the Houston stores are involved in a situation where imitation was the sincerest form of flattery, right up until it wasn't. According to court documents, Torchy's alleges that a former Houston employee stole and duplicated the house copy of the "Taco Bible," a complete recipe, process, and presentation guide for every dish on the company menu. When confronted about the theft, the employee confessed, returned the Taco Bible, and was fired. However, in a very short time, that fired employee emerged as a key staff person at a new Houston restaurant called Texas Taco Company that just happens to feature familiar-sounding tacos, sides, and sauce recipes, assembled and presented Torchy's-style, from a menu bearing descriptions lifted pretty much word-for-word from Torchy's menu. Torchy's is suing, and their Austin lawyer John Stenson provided us with a copy of the lawsuit and pointed out that this is not the first of its kind filed against these same Houston-area operators. Stenson says the civil suit is just entering the early discovery phase in the Harris County courts system. We'll keep you posted.

Now for a lightning round of local restaurant news: Shawn Cirkiel's restaurant dynasty will expand early next year to include a full-service Southwestern-influenced restaurant overlooking Lady Bird Lake in the Radisson Hotel at Congress and East Cesar Chavez. The as-yet-unnamed restaurant will replace a TGI Friday's outlet and will serve breakfast, lunch, and dinner in addition to providing room service and banquets for hotel guests; a major undertaking... Josh Watkins and his award-winning Carillon barbecue team will not compete in the World Food Championships in Las Vegas this weekend so they can honor a commitment to appear at the Austin Food & Wine Alliance's Wine & Swine. However, they are keeping that big smoking rig they won and will take the all-expenses-paid trip to Korea soon, as well... Lucky pie lovers packed the new Royer's Pie Haven (2900-B Guadalupe) for an invitation-only pre-opening party last Sunday. The grand opening party for the public is from 11am-4pm on Sunday, Nov. 10... Chef Joe Anguiano's Vox Table will be yet another eatery to take up residence in the Lamar Union development on South Lamar in the spring of 2014. In the meantime, Anguiano and his team will present a series of pop-up dinners to introduce his cuisine... At press time, La Condesa was still closed for repairs as a result of a fire last Saturday afternoon. The restaurant will announce their cleanup progress and reopening plans via social media outlets.