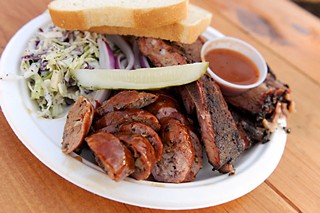 National media outlets love them some Austin! Hot on the heels of the Cooking Channel's Eat St. shooting at Micklethwait Craft Meats and Spartan Pizza trailers, we had the production company from the popular syndicated TV show Beer Geeks shooting episodes at Jester King Brewery on one end of town and North by Northwest Restaurant & Brewery on the other. In addition to the rolling cameras, it was possible to read about Ramen Tatsu-ya's rich pork stock in the pages of Vogue magazine and to enjoy a profile of Big Top Candy Shop in Sunday's Parade. Austin really has hit the big time.

Overbooking of so many events last week made it somewhat easier to navigate the crowd at La Dolce Vita Food and Wine Festival at Laguna Gloria this year, although the parking was a nightmare, yet again. Last year, we spent as much time waiting for our car as we did enjoying the party, and this year, there was no provision for handicapped parking at all – an example of poor planning on someone's part. Regarding the food, there were several booths with pork belly and several more with duck. The worst thing I've ever been served at one of these sip and stroll parties was a shot glass of smoked celery soup that had the shudder-worthy texture and flavor of Milk of Magnesia: really unfortunate. The team from Megg's Cafe & Hamilton Bread Co. from up the road in Temple acquitted themselves nicely with a delightful deviled egg and a tasty cup of caramelized popcorn. My favorite sweet bites of the evening were sorbetto and gelato flavors from Dolce Neve (1713 S. First), a new gelateria coming soon to South Austin. Brother and sister Marco and Francesca Silvestrini are partnered with her fiancé, Leo Ferrarese, in the new business that is shooting for an early December opening. They'll be using Mill-King Creamery milk and flavors inspired by local, seasonal produce. Their gelatos are very good. The best savory thing I tasted at the party was a brioche toast topped with bone marrow custard from the ladies of the Say LaV trailer. They always seem to show up with a winner.

The Texas Monthly BBQ 'Cue Court was a worthwhile addition to the culinary offerings at the Texas Book Festival over the weekend, with barbecue from Two Bros. BBQ Market from San Antonio, Austin's own Blue Ox barbecue, and an interesting mash-up of the Peached Tortilla and Miller's Smokehouse satisfying the crowd. Two Bros.' chopped beef Frito pie really hit the spot! And speaking of barbecue, we've got a mighty meaty weekend coming up, with the Texas Monthly Barbecue Festival (sold out) and the Meatopia event at the Pearl (tickets still available for Sunday, Nov. 3). Read about them in next week's Food section.