Celis Brewery, Back Home Where It Belongs 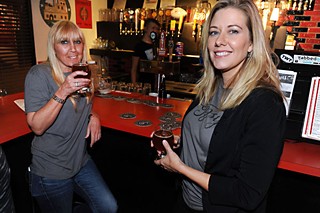 Traveling through rural Georgia, I pulled over, prayed for good reception, and juggled two phones – one for speaking, one for recording – to interview Christine Celis. As I geared up for the first question, a man with two rifles and a Confederate flag T-shirt sauntered past my truck's window. I faltered, stammered, and then panicked; Christine Celis, however, just kept right on going.

The daughter of famed brewmaster Pierre Celis, Christine is used to a certain amount of chaos. At just 4 years old, an age when most of us were playing make-believe, Christine was living her own fairy tale of sorts, watching her father brew beer. Christine says she was immediately enchanted. The memories are still vivid: "I was intrigued by the smells, seeing all the bottles pass by, something steaming coming out of the brew kettle." She recalls riding around with her father in a little truck in Hoegaarden, Belgium, making deliveries to distributors and bars. Eventually she graduated to washing and sorting bottles and finally to exporting. In 1989 when Pierre Celis retired, he asked Christine if she wanted to move to Texas. The proposition came seemingly out of the blue, but Christine remembers her excited reply: "Let's go to Texas."

In 1990, with a clear vision, Pierre bought a plot of land off Highway 290 and launched the first brewery in Austin in nearly a century. On May 1, 1992, Celis Brewery sold the first case of its namesake beer, Celis White. It was immensely popular. In a 1996 feature, the Chronicle credited Celis White with introducing a new generation of Austin drinkers to witbier: "Smacking of coriander and orange rind, this spicy brew has converted many Austinites to the style, particularly as a tonic against the Texas heat."

Celis Brewery was soon unable to meet the growing demands from its distributors. In 1995, Miller Brewing Company appeared with a solution: Miller would partner with Celis to help them meet the increased production demand in exchange for an ownership stake in the company. In hindsight, you might call it a deal with the devil; in any case, the partnership did not end well. Recipes were altered to elicit a higher margin, wide distribution was pulled, and the Celis brand got sucked into the corporate machine. In 2000, after years of what they considered the constant compromising of the integrity of the brand, the Celises relented to a full buyout. A year later, Miller shuttered the Celis Brewery.

In 2002, Michigan Brewing Company acquired Celis, and Celis beers, including the venerable Celis White, were back in production. However, Celis loyalists – put off by recipes recycled from the Miller days – were not impressed. Despite this, Michigan Brewing continued the production of Celis beers until its closure in 2012. Plagued by financial difficulties, Michigan Brewing's assets were sold at auction; among those assets was Celis Brewing Company. In June 2012, the Celis trademark made its way back to the Celis family – and so did brewmaster Kim Clarke.

Considered the first female brewmaster in Texas, Kim Clarke got her start brewing through a bit of good fortune. As a recent University of Texas graduate with a zoology degree and a pressing need for a job, Clarke met Christine and Pierre Celis just as they were starting up Celis Brewery in 1992. Owing to Clarke's background in biology and chemistry, Pierre Celis hired her to conduct some basic laboratory tests and propagate yeast strains, and she soon began working in the brewhouse as well.

"We were still a small company, a very small company then, and everybody at the brewery had a number of different duties," Clarke says. "When we needed people in packaging, we packaged. When we needed people to work in the brewhouse or other parts of the brewery, we just pitched in." Within six months the Celis duo invested in Clarke, sending her to Belgium for several weeks to train. Upon her return, Clarke continued to brew with Celis from 1992 through the end of 2000. Says Clarke, "In those days, it was an oddity for any woman to be brewing. There were really only a handful, but I was just very fortunate. The Celises never blinked an eye at giving me the opportunity to work for them."

After Celis Brewery closed in 2000, Clarke worked in the pharmaceutical industry for 13 years, until, through another stroke of luck, she was reunited with Christine Celis. "I bumped into her at the airport a few months prior, and I knew that she was actively trying to get a brewery started up again. That's how I got reconnected to her," Clarke says. "It's been a long time since I've been part of the brewing world, and I'm just thrilled about it, thrilled about being a part of it at this point."

Indeed, Clarke has rejoined Christine Celis as brewmaster. In 2014, the newly formed Christine Celis Brewery, LLC, will begin brewing Pierre Celis' original recipes. On a mission to educate beer lovers on the merits of Belgian beer, Christine will brew the beers she grew up with in Hoegaarden, telling me that each beer has its own story. In the meantime, she's working with master brewers from around the world to create a limited edition Gypsy Collaboration series. A true collaboration between each brewery and Christine, each beer will be experimental, with a healthy dose of whimsy: "People want that full-bodied, well-balanced, complex beer. The younger generation is even going beyond that. I mean, they are making it even extraordinary. A little more hops, a little more sour, all sorts of types. So I want to have my own line of some really crazy beers, but still keep the tradition of my father going as well."

For the first beer in the series, a Belgian IPA, Christine and Clarke partnered with Austin's Adelbert's Brewery, due to their expertise in brewing Belgian beer. Over the course of several months, working very closely with Adelbert's founder and brewmaster Scott Hovey and his head brewer, Taylor Ziebarth, the team nailed down the recipe. Brewed with Belgian yeast strains, it has a deep golden color with grapefruit and citrus aromas courtesy of the Cascade hops. At 7% alcohol, it's highly drinkable. According to Clarke, "We tried a lot of IPAs and tried a lot of Belgian strong ales, we tried other beers that would fall into the category of Belgian IPA, and really talked about what we liked, what qualities stood out to us. We tried a lot of hops. We were up 'til midnight one night just sniffing different hop varieties." Even with the new collaboration, Clarke can't help but wax sentimental. She's ready to make that Celis White again: "I love the Belgian white beer. I miss that beer. I love to drink it, I love to make it. That's a beer I really want to see come back. We brewed a number of beers, but it's a beer that I truly miss the taste of. There are a lot of other wheat beers out there, but I don't think that any of them are exactly like that beer we brewed."

Nine Texas breweries brought home awards from October's Great American Beer Festival held in Denver, Colorado, five of them out of Austin. This certainly bodes well for a full-on craft beer revolution, though it's hard not to feel a sense of longing for more female representation. Says Clarke, "I would encourage women to continue to try and to enjoy beer, and as they do, and as the number of women that drink beer grows, I think that the number of women that have an interest in making it themselves will grow."

As more and more women join the ranks of craft brewing, Christine Celis and Kim Clarke have certainly blazed a trail worth following. Christine Celis' 19-year-old daughter, Daytona, wants to continue the Celis legacy by becoming a brewer. Next year, she will travel to Belgium to learn under Belgian brewmasters, where she will reside for at least a year. Says Christine, "Twenty years ago, this was really a man's world. Right now, things have changed a lot. People are much more open-minded. Women can brew just as good as men. It doesn't matter what gender you are." Her only advice? "Never sell your name, ever, no matter what."