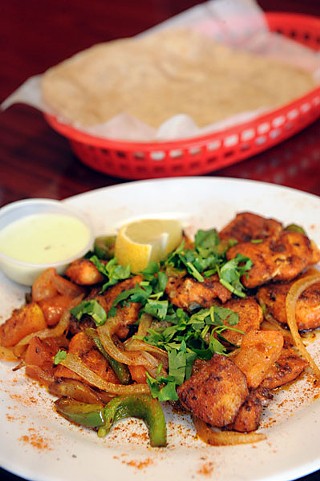 
I never expected to find Austin's best fish taco at a Bangladeshi restaurant, but as the old expression goes: Punch my eyes out, I've seen it all. This fish "taco" is a dish found at my new favorite affordable fish joint, Voss Fish & Grill, located in the Twin Fountains Plaza on the east side of North Lamar at its intersection with Rutland. It is owned and operated by Mamun Rahman and his wife Rupa. You can also expect to see their little bulldozer son Ayaan cruising the floor, a 20-month-old who looks twice that age. Mamun moved to California 14 years ago from Bangladesh, with no particular interest in food. "I lived on canned food my first two years here," he says, "and then I got into food television shows, cooking magazines, and cookbooks, and basically taught myself. I'd call the family back home in Bangladesh and ask them how to prepare dishes, too. Now I love to cook." 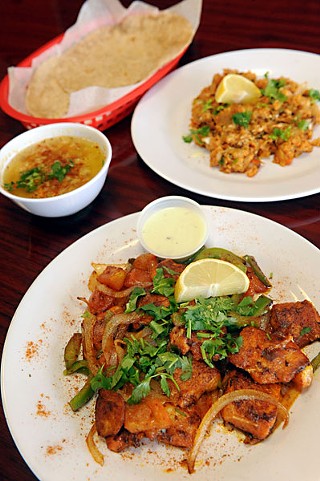 Mamun moved to Houston to help his brother operate the original Voss down there, apprenticing with his brother before making the move to Austin to open the restaurant here. "The one in Houston is more of a Halal butcher and seafood shop than a strict restaurant, with the motto: You buy it, we cook it," says Mamun. "I learned a lot."

The Austin space is spotless and cozy, with 12 tables and minimal decoration. The menu is small, with five appetizers and 14 entrees, although don't expect to find all of the entrees at any one time. (Mamun is out of a couple of items now because the price is temporarily too high, or the supply is unsteady.) All drinks come from bottles stored in a cooler, unless they happen to have a pot of excellent chai ready.

My first visit started with some appetizers: a couple of samosas ($1), which are spice- and potato-filled and wrapped in very flaky golden brown wrappers. Next up was a "fish kabob" ($2, kabob in the Indian sense; it's actually a fish cake): hockey-puck-sized, golden brown, nicely spiced, and delicious. We tried the sole (shoul in Bengali) pasa bangla fillet ($6.99), which is a good-sized fillet cooked on the griddle and coated with Mamun's concoction of masala mix, which contains 19 spices. The fish is actually Channa striata, or Snakehead murrel, which I've eaten often in Thailand, a wonderfully sweet freshwater fillet with a medium flaky texture. Place this in chapatti flatbread, top with salad and his masala-ranch dressing, and you have one of the best, fattest fish tacos in town. 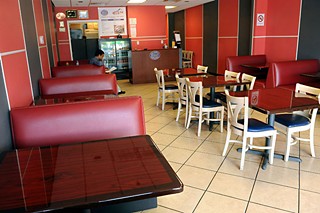 We had shrimp kata kat ($11.99), a mixture of shrimp, shoul, and vegetables chopped and tossed on the griddle with his masala; fantastic in a chapatti. We also tried fish masala ($11.99) – a stir fry of shoul chunks, onion, peppers, and spices – and loved every bite. I had this dish later, cooked with boneless chicken thighs ($8.99) and loved it that way, also. Like me, Mamun hates chicken breast and prefers the more flavorful and juicy thigh meat.

Other visits featured mahi fillet ($9.99), coated with masala and cooked perfectly moist on the flattop. We also had the whole pomfret ($12.99), which was a tad overdone but still meaty and tasty. The masala-fused skin was like spicy fish candy; imagine a whole flounder, but thicker and done Bangladeshi-style. With each platter you get your choice of two of the five offered sides: crisp romaine and tomato salad, luscious thick lentil soup made from red and yellow daal, chapatti flatbreads, white rice, or thin, crisp fries.

One day we tried the "fish nuggets" ($5.99) in the appetizer section. What we got was some of the best fried fish I've eaten in Austin, and easily enough for two to snack on. The fish is shoul, coated lightly in a fine cornmeal and heavily dusted with masala, golden fried, and perfect. He serves it with tartar sauce and his masala ranch. Another trip, I tried the chicken nuggets ($3.99), hoping they would be the boneless thighs cooked like the fish nuggets; not so, they are frozen units there for the kids.