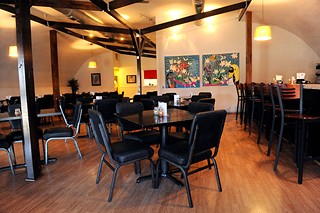 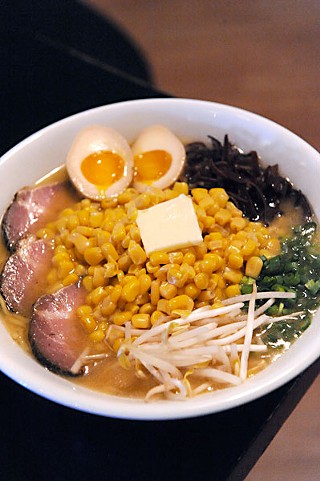 These days you can't swing a cat in Austin without hitting a ramen restaurant. Until a few years ago, ramen was something most Austinites purchased in plastic packages for a quarter. But the city's growing diversity and culinary sophistication has created new demands for global tastes, along with a swelling population of entrepreneurial cooks. You can trace the beginning of the ramen wars to May 2012, when Michi Ramen opened in a North Austin food truck, selling bowls of honest, slow-simmered broth and noodles. Ramen Tatsu-ya followed in the summer of the same year, with Daruma Ramen close on their heels. Add this to places like East Side King, Komé, and Banzai, which also serve ramen, and the city suddenly looks like a scene from the movie Tampopo, with soup devotees passionately staking their territory in one ramen camp or another. Michi Ramen remains a top contender, despite a faltering start for the North Lamar brick-and-mortar location that opened, whirlwindlike, earlier this year. The recycled Quonset hut has seen better days, and even after Michi's new coat of paint the entire space could benefit from some thoughtful freshening. Aesthetics are not the restaurant's strong suit. But Michi Ramen is clearly not out to snag the event-dining crowd. Ramen is Japanese comfort food, which is precisely what Michi serves, along with all the trimmings.

To the uninitiated, the seemingly limitless add-ons and options on the menu can at times seem as complicated as a cellular service plan. But all you really need to know is that Michi has five basic soup ramens, plus a non-soup ramen. The standard toppings on each vary slightly, though all (except the veggie) are served with sliced pork shoulder and plenty of green onions. The sliced pork, called chashu, is essentially brined and roasted, giving it a mild hammy flavor. The noodles in each bowl are firm even after they've been soaking in soup for a little while. Apart from a vegetarian broth, Michi makes two basic pork broths – one is miso-based, the other is soy-based. The broth can be had three ways: light, regular, or stout, and each varies in thickness, fat content, and flavor. The stout broths have a satiny, almost velvet consistency and pack a punch in terms of flavor. But the regular broths also have fairly well-balanced, though less meaty, profiles. Add-ons include marinated soft-boiled egg, fish cake, pickled mustard greens, ginger, extra pork, bamboo shoots, and a variety of vegetables.

I loved the Sapporo Ramen ($9.50), topped with sweet buttered corn that contrasts nicely with the clean, almost bready flavor of the miso broth. We added an exceptionally tasty marinated soft-boiled egg ($1) and garlic chili oil (50 cents) for diversity. Thrill seekers may go for the spicy Jungle Ramen ($9.50), flavored with lemongrass and accompanied by crisp bean sprouts. It is attention grabbing, though ultimately the lemongrass dilutes the uniformity of the miso broth. In the final comparison, it was hard to beat the Michi Ramen ($8.50), made with stout ton­kotsu broth, especially once we added some of Michi's muscular pickled greens (50 cents).

Although ramen is the star attraction, Michi also has some enticing sides meant to accompany or even replace the noodles. I recommend the burned ends over rice (Chashu Don, $6) – essentially just the exterior bits of the same roast pork that's in the ramen, only with rice. Add a little of Michi's roasted garlic chili oil and some bean sprouts or corn, and you've got yourself a very satisfying noodleless lunch. Calamari salad ($3) is another treat. The squid is sliced thin, tossed with bamboo shoots, mushrooms, and light ginger soy dressing for a perky bite. Gyoza ($4) are house-made dumplings with tasty ground pork and green onions. Really, the only side that left me feeling meh was the vegetable tempura ($4), which seemed both heavy and a little tasteless.

But then, why bother with tired old tempura when a hearty bowl of soup and sturdy noodles beckon? Michi Ramen competes admirably against Austin's other ramen contenders.