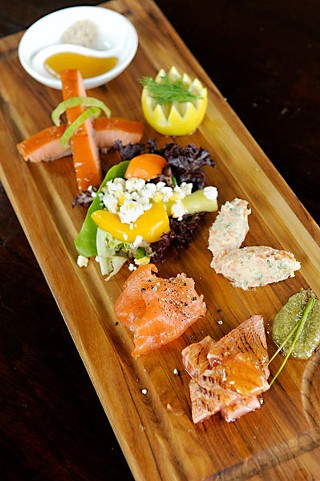 
A toasted bagel, schmeared with cream cheese, dotted with red onion and capers, and piled with orangey-pink, paper-thin slices of smoked salmon is a breakfast like no other. Cold-smoked salmon, or lox, hearkens back culturally to the late 19th century, when smoked fish was popular fare among the working poor of the Northeast, a cheap and easy protein that required no cooking.

Nowadays, smoked salmon is very expensive, hovering between $25-35 a pound, while its quality has been steadily declining. Salmon that have died in the nets, that have been brutally thrown about, that have aged after harvesting, and that have been improperly frozen sustain deep bruising, separation, and cracking of the flesh. While this is no impediment to canning, it is impossible to slice these mishandled salmon into the delicate slices of traditional lox.

Austin chef Sebastien Caillabet grew so frustrated with the poor quality of commercially available smoked salmon that he began to make his own premium quality lox at home. The response he received was so enthusiastic that he took his hobby public, starting Celtic Seafare with partner Ken Sepulveda in 2011. They opted to use wild-caught, British Columbian salmon in season; out of season, they use sustainably raised, humanely harvested salmon from Scotland and the Faroe Islands, where tightly regulated salmon operations provide fish with plenty of cold, clean seawater and a natural diet of krill.

Originally, Celtic Seafare sold only at the Barton Creek Farmers Market, which raised a few eyebrows. "Of course, there is no locally caught salmon in Texas!" laughs Caillabet. "Our salmon is locally made, locally smoked." Celtic Seafare currently makes three stunning varieties of hand-sliced cold-smoked salmon and six eclectic flavors of hot-smoked salmon. Just this month, they have expanded into a brick-and-mortar store in Dripping Springs, which houses the smoking operations and sells to the general public on a daily basis. "We are doing salmon tastings at the new store Thursday, Friday, and Saturday from 4 to 6," says Callaibet. "And we are continuing to do the Barton Creek and Lone Star farmers' markets on the weekend."