As the hotel system's only official forager, Valerie Broussard brings chefs and farmers together at the W 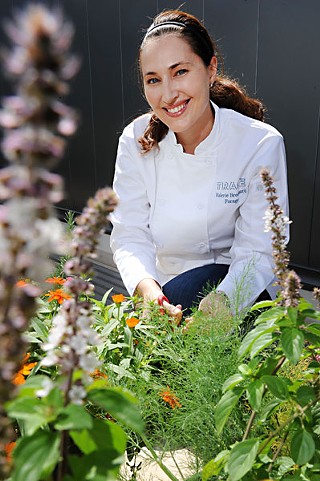 Valerie Broussard tends to future ingredients in the Trace herb garden on the roof of the W Hotel. (Photo by John Anderson)

For the past three years, Valerie Broussard has been the official forager for Austin's W Hotel. Wait ... a forager in a hotel? Why, yes. It may not mean what you think.

In the 14th century, a forager procured fodder for domestic animals. Today, the Oxford English Dictionary defines the term as someone who "searches widely for food or provisions." But in common usage, foraging most often evokes rambling through the woods gathering noncultivated edibles – berries, nuts, mushrooms, seeds. (Anyone remember Euell Gibbons and Stalking the Wild Asparagus?) In the late 20th century, however, as part of an ever-increasing attention to local and sustainable food sourcing, the word forager began to gain new meaning in a broader context.

It's likely that, in 1986, Chez Panisse in Berkeley, Calif., was the first place to designate a full-time restaurant forager with the job of combing the vicinity for suitable provisions – not necessarily wild nuts and berries, but the most delicious peaches, the tastiest, most humanely raised chickens, and other foodstuffs that would meet the exacting standards of Alice Waters and her chefs. That first forager was the late Catherine Brandel, an early mover and shaker in California's food revolution. Since then, the concept of restaurant forager has spread; it describes those who search out the quality ingredients that chefs want and who facilitate direct relationships with the farmers, ranchers, and artisan foodmakers who produce them.

It's entirely fitting that the Austin W's Broussard – food activist, sustainability champion, and the only forager in the entire Starwood hotel system – received the 2013 Cath­erine Brandel Fellow­ship, awarded by the Women Chefs and Restaurateurs Association. That fellowship allowed Broussard to work with Chez Panisse foragers and their supplier Green String Farm, studying the farmer/forager/chef relationships and processes at the source where it all began.

It's not surprising that Broussard's culinary path led her to the role of forager. For starters, she grew up on the banks of Bayou Teche in St. Martinville, La., where Cajun cooking, crawfish, and fresh garden vegetables were indelibly imprinted. "If there's anyone in Louisiana who doesn't care about food, I haven't met them," she says. "My grandfather always kept a garden – blackberries, mirlitons, and tomatoes on the kitchen windowsill. Both my parents worked, but we sat down for dinner together every night. And my family traveled, so we were exposed to different kinds of foods."

After graduating from Florida State Uni­ver­sity with a bachelor's in nutrition (and on a full volleyball scholarship), Brou­ssard worked in the fashion industry for a decade, traveling the U.S., Europe, Latin America, and South Africa, and "exploring local cuisines wherever I went." She began working in restaurants and graduated from Peter Kump's New York Cooking School (now the Institute of Culinary Education), which culminated in her internship at Jean-Georges Vongerichten's restaurant JoJo. In New York, she honed her culinary skills as private chef, food stylist assistant, recipe test­er, product demonstration trainer/coordinator at Citarella, and produce- and catering-department manager for Balducci's Market. And she wrote about food for publications like Martha Stewart Living, Food Arts, and Wine Spectator. All the while, she continued developing her interest in sustainability and local, carefully produced food.

In 2008, Broussard spent a year in Colorno, Italy (near Parma) at the University of Gastronomic Sciences, earning a master's degree in food culture and communication. She wrote her thesis on sustainable food sourcing and alternate distribution methods for restaurants. "We studied food and wine history and anthropology, food technology and economy, and sensory analysis. We had field seminars in France, Spain, and Crete, as well as in many regions of Italy ... concentrating on cheeses, cured meats, wines, olive oils, vinegars. And we ate really well," she remembers. "Once you've tasted real parmesan, you can never go back."

After frequent visits to her sister here, Broussard relocated to Austin in 2009. "I was excited by the food culture and I wanted to contribute and be a part of it," she says. Her initial job in town was organic food coordinator at the Barr Mansion, researching and purveying the exclusively organic ingredients the event facility uses. And she got to know the local food community via farmers' markets, the Sustainable Food Center, and Slow Food Austin (where she's a board member).

Broussard joined the W Hotel Austin in 2010 as something of an experiment. No hotel in the Starwood family had had a forager before, but the W was a good match. It's part of Stratus Properties' Block 21 development, designed as a benchmark for environmental responsibility and with extensive ongoing sustainability initiatives, including a rooftop apiary (see "Honey, I'm Home," May 17). And the hotel's Trace restaurant's name refers to tracing foods from their sources to the kitchen.

"The W was interested in my experience and I proposed the role of forager. They were committed to a farm-to-table model; I made the case that they needed someone who knows the growers and the local food scene to develop relationships, do the research, and coordinate communications and logistics."

And that's exactly what Broussard does. As liaison between chefs and farmers, she conveys to farmers what the chefs are looking for and keeps the kitchens apprised of what's available each week from the producers. She shops farmers' markets and farmstands twice a week, but she also spends serious computer time working with inventory, purchase orders, invoices, and budgets. She heads the hotel's Green Council committee in charge of in-house training in composting and recycling.

"Make no mistake," Broussard says, "all of the hotel's ingredients aren't local. We serve breakfast, lunch, and dinner seven days a week, and guests want some things that just don't come from here – like bananas and avocados. But we all work hard to keep it as local as we can, and the chefs are flexible and creative, based on what's in season. It gives me great joy to match up producers with chefs who love their products and use them to make something beautiful."