The tug between style and substance at Searsucker 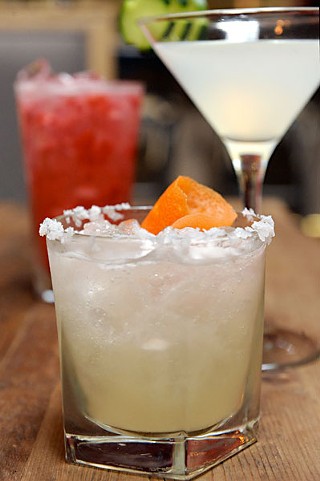 And don't forget your straw fedora. You'll need it at this Austin outpost of the San Diego-based chain, where the men all look like golf pros, and the women model themselves after Britney Spears. Searsucker is one of those restaurants that slavishly embraces American pop-culture style, repackaging it with a flirtatious wink and a nod. A flickering neon sign urging diners to "eat" pays homage to the old-fashioned dive, while retro incandescent bulbs mingle with heavy ropes to form rustic light fixtures. But one look at the $90 steak (for two) on the menu lets you know that this is no small-town diner.

Herein lies Searsucker's cunning. American classics are commodified with just enough cleverness to make them seem exotic. Caesar salad ($9) suddenly seems desirably foreign again when it is made with kale. Buffalo wings are de rigueur when they are trimmed and become "Farm Bird Lollipops" ($12). And by now everyone knows that french fries ($7) are better when they are cooked in duck fat and served with "tomato jam" instead of ketchup. What's not to like about that, right? For my part, I prefer a place that has the substance to match its style. So far, owner/celebrity chef Brian Malarkey has not delivered the goods.

A beef carpaccio ($15) sampled on our first visit was absurdly meager; although it looked pretty, fanned out on a plate, the paper-thin slices of raw beef were completely outmuscled by a vinegar dressing that made the meat seem rancid. Meanwhile the limp, fried brussels sprouts ($7) tasted like they were made by someone who was forced to eat them as a child. I call this a failure of kitchen management and training. Surely Malarkey can find someone in Austin to make crisp and bright fried sprouts. Even dessert that night fell flat. Heavy, miniature sugar doughnuts ($8) felt liked they'd been kept warm under heat lamps: We probably would have been happier at the local Dunkin' Donuts.

The kitchen does better with straightforward Southern classics like spicy shrimp over bacon grits ($13). I liked everything about Searsucker's version of this workhorse of American gastronomy, from the sweet, plump shrimp to the dark-rouxed peppery gravy and the sublime cheddary grits.

Likewise, we found Searsucker's brunch to be a bright spot. The duck fat biscuits and gravy ($5) are a Sunday morning revelation. Cheddar biscuits are light and flaky, the gravy is rich and made with plenty of sausage and pan drippings. I also liked the McPuffin the Morning ($9), which is basically a classy sausage biscuit with roasted tomatoes and wilted spinach. Even the "Boring" bacon and eggs ($11) seemed exceptional when served with a crisp potato cake and what may be the best bacon I've ever tasted. Add a $4 Bloody Mary or a $2 mimosa and you've got a perfect weekend wake-up.

Since coming to Austin, troublesome news seems to have swirled around Malarkey like a cloud of bees. First, a fire swept through the restaurant shortly after it opened in May. Then reports came that Malarkey was not asked to return for a second season of ABC's reality competition show The Taste despite mentoring the winning chef. He now has several new "fabric of social dining" concept restaurant projects in the works, including one in L.A. scheduled to open on New Year's Eve. I wonder whether Malarkey has overreached. Certainly the Austin Searsucker has the right style concept; it just needs better attention to execution.