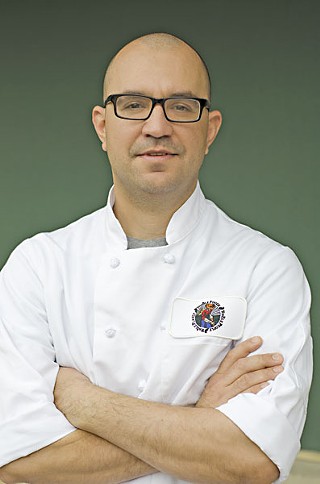 Randy Clemens: Clemens is a graduate of the California School of Culinary Arts and has written for Gourmet, Saveur, Wine Enthusiast, Los Angeles magazine, and Beer Advocate. He is the author of the bestselling The Sriracha Cookbook, the brand-new The Veggie-Lover's Sriracha Cookbook, and The Craft of Stone Brewing Co., all from Ten Speed Press. He lives in Los Angeles, Calif., where he is an avid homebrewer and recognized beer judge.

Mando Rayo: By day, Mando Rayo is a Latino engagement strategist, and by night he's a self-appointed taco journalist. Through his contributions to the famed Taco Journalism blog, fans go behind the scenes with the trailers, trucks, and taqueros who make it all possible; witness the stories, traditions, and cultures behind the tacos; and see why Austinites are proud taco eaters. He and fellow taco blogger Jarod Neece are the co-authors of Austin Breakfast Tacos: The Story of the Most Important Taco of the Day (History Press, 192 pp., $14.99).

Eric Lucas: Chef Lucas is a new addition to our cadre of celebrity judges, coming to us from our sponsoring partner, Whole Foods Market, where he's been executive chef of the company's flagship store for the past two years. Lucas spent his early career in California, where he attended culinary school and held various chef positions before relocating his family to Austin in 2007. Here in Austin, he has worked as an executive chef at Fino Restaurant Patio & Bar and as a corporate chef at Dell Computers. He was drawn to the culture of Whole Foods Market because his schedule provides plenty of time for his hobbies: the great outdoors, traveling with his wife, and cooking in his own home.

Paula Disbrowe: Disbrowe is a food writer whose work has appeared in The New York Times, Food & Wine, Health, Delta Sky, and Cooking Light, among others. She previously served as the food editor of Restaurant Business magazine and regional travel editor of Southern Living. She is the author of four cookbooks: Cowgirl Cuisine, with recipes from a ranch in the Texas Hill Country; Crescent City Cooking with Susan Spicer; New York Times bestseller Down Home with the Neelys with Food Network stars Pat and Gina Neely; and Real Cajun with Donald Link, which won the 2010 James Beard Award for Best American Cookbook.

Alan Lazarus: Executive chef and co-owner of the highly acclaimed Vespaio and SoCo hotspot Enoteca Vespaio next door, Lazarus has long been recognized as one of Austin's top toques. After more than 35 years of cooking in Austin, one of his newest interests is organic gardening, raising herbs and tomatoes to be featured in his popular restaurants.