Mozzarella, meet Motor City: We swoon for this Detroit-style pizza

Last fall, our prayers for good pizza in far South Austin were answered when brothers Zane and Brandon Hunt opened a second location of their successful Via 313 trailer next to the Red Shed Tavern. The brothers moved to Austin in 2009 from what they describe as a hard-working, blue-collar area of Detroit and opened their first trailer in late 2011, serving pizza inspired by the traditional pies they remembered from childhood. It didn't take us long to become addicted to their unique Detroit-style pizza (which has been receiving national praise), baked in authentic fashion in square steel automotive parts pans. The crust is thick, but unlike the dense Chicago-style, it is light and spongy. Because the pans have sides, there is no doughy crust around the edges. Instead, you get a crispy layer of caramelized cheese all around, and because the savory red sauce is drizzled lightly over the toppings, the dough never gets soggy. We have become die-hard regulars.

Although one is plenty to get two people full, we order different ones to share and have leftovers for lunch the next day. We love the simplicity of their bestselling Detroiter ($13), topped with two kinds of pepperoni (smoked and natural casing), but often go all out and get the Carnivore ($15), which adds bacon slices, deli ham, and Italian sausage. For a change we get the Cadillac ($16), topped with gorgonzola, shaved prosciutto, parmesan, fig preserves, and a drizzle of balsamic glaze. A personal favorite is the 500 ($14), with pepperoni, jalapeño slices, and whole pineapple rings (my mouth is watering as I write this).

Loyal South Austin fans grieved when the Hunt brothers packed up that trailer in early August to become the resident trailer at Craft Pride on Rainey, starting Aug. 15. For the time being, we'll have to drive farther to pick up our orders, but will keep hoping their success brings a third location back to the 78745. 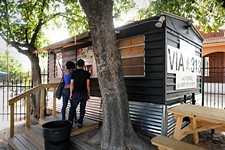