Craft Beer Is Their Creed

Forget 'ladies who lunch' – it's ladies who like lager at BitchBeer.org 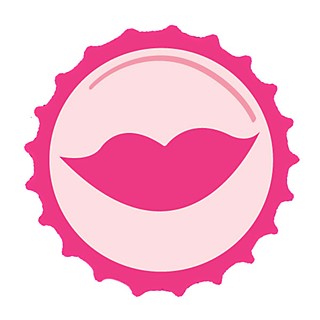 There are a couple of tried-and-true ways for women to get Internet-famous: showing lots of boobs, as in a leaked sex tape, or the longer slog of consistently producing high quality, useful, and/or hilarious content. Though they count 14 breasts among them, the seven bloggers behind BitchBeer.org chose the way of words and have been rewarded with a legion of fans and a book deal with the History Press, the same publisher behind recent releases The Austin Food Blogger Alliance Cookbook and Austin Breakfast Tacos.

Well, if "bitch beer" is what girls drink, then these women are working to reclaim the term to include craft beer like Live Oak HefeWeizen – "a gateway beer you'll drink your whole life," Bitch Beer cofounder Caroline Wallace calls it.

"I took a growler of it to a party the other night and drank from it all night," says Kat McCullough, an aspiring stagehand moving to Seattle next month. "I don't think people look at me and think, 'Oh, I bet she drinks a lot of craft beer.' I think they look at me and think, 'She's young and probably parties too much.'" The Bitch Beer crew are all in their twenties, not too far removed from their college partying days at St. Edward's University, where most of them worked on the school's newspaper, Hilltop Views.

"If we hadn't started this, we would've graduated college and wouldn't have seen each other as much as we do. It was a way to maintain our friendship," says Holly Aker, whose day job responsibilities include search engine optimization. "We text every single day."

With a team of six in Austin – Wendy Cawthon blogs from Dallas – you're sure to run into Bitch Beer bloggers at most Austin beer events, so it's easy to see for yourself whether or not they live up to the term "bitch." The first time I met a quorum of them at the Texas Craft Beer Festival, they smiled and sweetly gave me a black Koozie with their distinctive logo – pink lips on a bottle cap. Aker was more like Kate Middleton holding boozy court than a character from Mean Girls.

The voice of the blog, like the women who run it, is decidedly accessible: purposely neither bitchy nor the closest male hophead equivalent, "snobby." "A total beer nerd could read this and still appreciate it and not feel like they're being talked down to or explained to too much," says Wallace, who works in video production. "But someone who's totally new to beer could read it and have it not be over their head."

"And we're a little snarky," adds Sarah Wood, the only one of the team who went to college at Texas State. (In addition to writing, she also designs for the site.)

The concept is working. The blog is only a year and a half old, but they started getting press credentials for the Great American Beer Festival in Colorado last year and sold out the 125 tickets on sale to their anniversary party at Rogness Brewing Company. They've appeared on Beer Diaries, the Austin-based Web series, and on PBS. And, of course, every blogger's dream: the book deal. 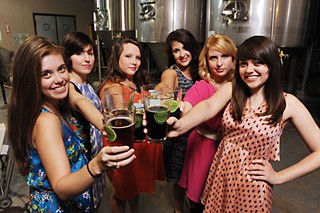 The path toward publishing began fatefully when Bitch Beer cofounder Shaun Martin was hired to design the Austin Food Blogger Alliance Cookbook, which came out this past April. Martin realized that the beer blog she'd started for fun with her girlfriends fit the criteria for membership in the local nonprofit group of bloggers, so the Bitch Beer crew wrote a craft beer vignette for the collection. The publisher liked their section enough to approach them about a book of their own; the History Press already had a precedent profiling a city's beer scene with its 2012 title Houston Beer: A Heady History of Brewing in the Bayou City by Ronnie Crocker of the Houston Chronicle.

For the past four months, the seven bloggers have packed in writing, research, and more than 60 interviews for Austin Beer: Capital City History on Tap (set for a September release) on top of their day jobs, regular Bitch Beer events, and the blogging schedule. The book's scope spans from pre-Prohibition Austin through the recent boom and on to breweries working to open in the near future. Says Christen Thompson, commissioning editor at the History Press: "Being connected to Austin, it was just so great to read their drafts and time after time have that great 'No way! I didn't know that was there!' feeling."

The task of putting down for posterity a local industry in flux wasn't always easy. "My chapter is breweries in 2001 to 2008, and they were changing while I was writing," says Aker – incidentally summing up the state of beer in Austin with that one sentence.

The story of the blog's development itself is dynamic history, too.

About six months after starting the site, the Bitch Beer team went to Dallas to cover the Untapped Beer and Music Festival. "People were walking up to us, because we had name tags, and they wanted to meet us," recalls Aker, still in disbelief. "'Who me? I'm unemployed!'" (She's employed now.)

"So many people we interviewed said they knew the blog. I almost thought they were lying to seem hip," says Wallace. Their Twitter base has grown steadily, so it's plausible many of the North Texas brewers really had heard of them.

In January 2013, Austin Chronicle contributor Kate Thornberry ranked BitchBeer.org among the Top 10 Austin food blogs. National attention followed just a month later. While flipping through the program at a Roller Derby bout, the collective was struck by two beer ads putting out very different messages: One, a forceful Lone Star ad, featured a Derby girl crushing a beer can on her forehead, while the other, a South Austin Brewery ad, revolved around a sultry model holding a beer and wearing nothing but a T-shirt and boots with the tagline, "Your Champagne Just Got Jealous!" The bloggers bristled at the ad's not exactly progressive "use of a half naked female to sell beer"; Wallace decided to lay out her complaints in a long post titled "How to alienate female beer drinkers in one easy step."

"The day I posted it, I got text messages from at least three or four guys we know who work in craft breweries," Wallace recalls. "Even men are tired of being advertised to like that." The post went viral, and the comments board lit up with supporters cheering Wallace on and detractors arguing she didn't get the ad's supposed "parody" and accusing her of launching a personal attack on Eva Strangelove, the featured model who also helped develop the ad concept. At the time, Strangelove was hospitalized for an illness, and her husband was trying to raise money online for medical bills.

"We got to see how the rest of the community would come to our support," says Aker. "People came to Beerpulse [the national beer site] and defended us: 'These girls did not put this woman in the hospital.'"

The group doesn't shy away from discussions of sexual politics, however, Aker points out, "We aren't constantly talking about women."

Arianna Auber, who also covers art events for the Austin American-Statesman, is especially drawn to craft beer's more egalitarian appeal: "People will drink a wine because it's $65. People will drink beer because it tastes good, and they know the person who made it."

Though the Bitch Beer website doesn't have gender data on visitors, 40% of Bitch Beer's Facebook fans are men. The split is nearly the inverse of craft beer community at large. Morgan Stanley has conducted market research that puts women at about 37% of craft beer drinkers.

And they're taking that message on the road. Now that they've turned their book in to their editor, the women are planning an upcoming trip to the Great American Beer Festival in Denver, Colo. They're driving rather than flying specifically to bring back more bottles to share – part of their ongoing mission to spread the good word of craft beer far and wide. "We should just rent a U-Haul," Wood laughs.